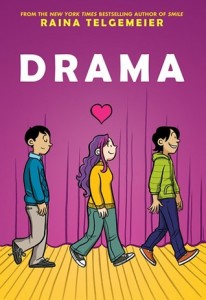 Callie loves theater. And while she would totally try out for her middle school’s production of Moon Over Mississippi, she’s a terrible singer. Instead she’s the set designer for the stage crew, and this year she’s determined to create a set worthy of Broadway on a middle-school budget. But how can she, when she doesn’t know much about carpentry, ticket sales are down, and the crew members are having trouble working together? Not to mention the onstage AND offstage drama that occurs once the actors are chosen, and when two cute brothers enter the picture, things get even crazier! Following the success of SMILE, Raina Telgemeier brings us another graphic novel featuring a diverse set of characters that humorously explores friendship, crushes, and all-around drama!

How did I get this book: I got an ARC at BEA

Why did I read this book: I’ve heard awesome things about the author’s previous GN Smile. Plus, THEATRE!DRAMA! in a MG setting are things I happen to love.

Drama is a rather appropriate title for this charming graphic novel for and about middle graders. At centre stage is Callie, a theatre enthusiast and set designer for the stage crew at her school, who hopes to create a veritable bang in this year’s production of Moon Over Mississippi. Part of the drama comes from the lack of budget for Callie’s (awesome) ideas and one of the (many) great things about the story is how Callie faces this problem and solves it with creativity and dedication.

Those two words are actually quite fitting regarding the rest of the crew as well and Drama effectively shows what goes behind the stage of a theatre production and all the effort necessary to make it work. Another thing this book accomplishes is to portray the stage crew as individuals who actually do enjoy what they do, have specifically applied for those roles and are good at those jobs – these are not actor-wannabes who for some reason didn’t get the main role and ended up on stage crew as second choice. Quite the contrary and I thought that was really, really cool.

But not all of the drama comes from the production of the play – Callie has her crushes on boys to deal with too and the author expertly portrays her anxiety and insecurity about that in a way that doesn’t make her a quivering mess that cares only about boys. Her crushes (and how she is crushed by her crushes. Damn them) are important to her but so are her friends, her family and her job as a set designer. In that sense, Drama is a well-balanced act featuring a self-affirming girl-centric story.

Another great aspect of the book is in its diverse portrayal of characters. There are several PoC as well as LGBT characters, some of which are already out, some of which are still figuring things out before doing so – and this is the only aspect of the story where there is no drama whatsoever and its all presented very positively.
With regards to the art, the graphic novel features colourful, clear and bright panels that are delightful if not necessarily mould-breaking. You can see some of it in the trailer below:

I loved Drama – it was a quick and engaging read, featuring great female characters doing really cool things and I feel like all kids should be reading this.

That said, at the end of the day, it is so freaking encouraging and inspiring to read a book featuring such a female-positive story with such a bunch of diverse characters that I almost wish I didn’t have to say the obvious: the heroine of this story is still the white, middle class, cisgender character and everybody else – as awesome as they are – are still secondary characters in her drama. Mind you, this does not make the book any less lovely or Callie’s experience any less important – it is just an observation about the overwhelming amount of stories featuring just that type of protagonist that are available to us. 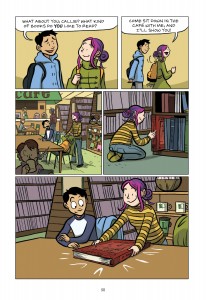 Reading Next: And All the Stars by Andrea K Höst