Today, we are thrilled to host a stop on the blog tour for the UK release of The Girl Who Soared Over Fairyland and Cut the Moon in Two by the incomparable Catherynne M. Valente. We are huge fans of Cat’s work, especially the fairyland books – and this third installment is no exception (Ana loved it). 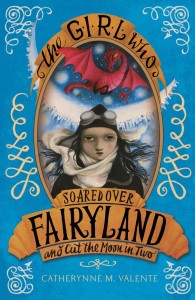 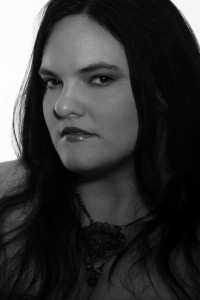 And now, without further ado, we’re very excited to present our excerpt from The Girl Who Soared Over Fairyland and Cut the Moon in Two! 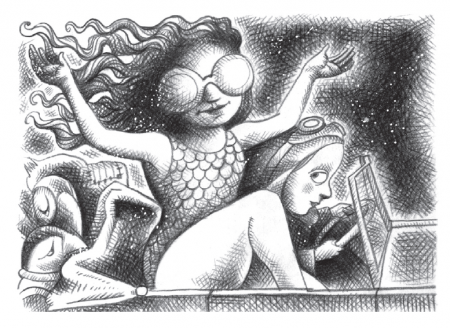 “I want to go to Fairyland.”

The Blue Wind tapped the dashboard impatiently. “She’s very stubborn on that point, brother. Dense as a foot, this one. Personally, I detest Fairyland. Something is always brewing there, some frantic task that simply must be done, some despot who cannot be borne another moment, some bauble that demands fetching. It’s exhausting! Wouldn’t you rather have a nice race across Antarctica instead? Or a Grand Tour of the Gulf Stream? We could skip stones across the North Pole. Besides, no one ever asks me to go running off on a grand adventure. No one ever says: Blue, darling, wouldn’t you like to go away to Fairyland and skate on the clouds there? One does like to be asked.”

But the squat Wind had already plucked a silvery, iridescent moon from his coat, a crescent hanging from a fine chain. Ruby starlight caught in its horns.

“Fairyland’s on special to night, as it happens,” he purred. “So cheap my little baby typhoons in Tokyo will have to go hungry. A bargain fit for a beggar.”

“How much?” ventured September.

The Wind smiled. His woolly, frozen eyebrows waggled. “To night only, my Midnight, Blue- Light, You- Heard- It- Right, Close- Out deal: All it costs is Everything You Have.”

September looked down at her jar of coins, nestled in her lap. “That’s not a proper price at all. How do you know how much I have? What if all I had was a shoelace and a spare button?”

The Wind’s smile got deeper and wider and bluer. “The point’s not what it costs; it’s what it costs you. Everything You Have. That’s my price, that’s my prize, that’s my ransom, and that’s my rune. The only price in the world that matters is the one that hurts to pay.” He let the Moon spin on its chain. “You want it; I have it. There’s no duel here. If you had a shoelace and a spare button, that’d be on the tag.”

September sighed. She had saved it all for this, she supposed, to be able to pay her way respectably. She held her jar, heavy as all the days she’d spent earning it. She was paying with Hours again, she realized, just as she had with the Goblin Glasswort Groof. The coins didn’t mean five or ten or twenty- five cents, they meant time. They meant half a day on the Powell farm or four letters for Mr. Killory or every morning getting rooster scratches on her arm just for trying to feed the White stone chickens.

All money is imaginary.

September lifted the jar up and handed it over.

The whispering Wind scoffed. “The rest, too, little holdout. I’m not your fool.”

September grimaced as she handed over the book of Valkyries and mistletoe and hairy god- legs and her last butterscotch. Being more or less an honest girl, she would have given him the hammer and nails as well, but when she offered them, the Wind hissed and recoiled, smelling their iron. He r ose up into the air in a hurry and, turning slowly upside down, hung the Moon around her rearview mirror. It whirled and glimmered, cool and pale. But the Wind was not finished. He pulled something out of his coat— a huge, long, ornate box, perfectly white, with strange scrimshaw tangled up all over it: horns and crab claws and hearts and ears and stars and flowers and open, grasping hands. It was emphatically locked.

“I said it would cost you Everything You Have.” The Blue Wind in the passenger seat chuckled gleefully. “Take this to the Whelk of the Moon in Almanack— that’s a city. Ask anyone, they’ll point you. And no peeking.” The Wind waved his fingers at her. “You didn’t really think a jar of small change was all you had, did you? How sad.”

He closed up his coat and stepped lightly up and away, as if climbing invisible stairs. September looked at her own Blue Wind uncertainly.

“Well?” she snapped. “On your Way, then. Hoof it, or wheel it, or however your personal phraseology would handle the fantastical notion of getting a move on.” 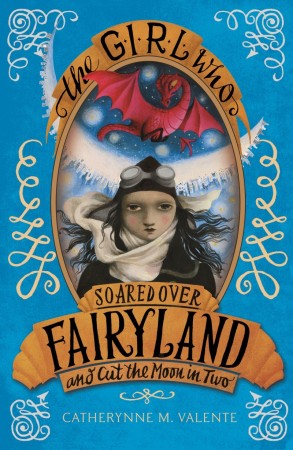 “One of the most extraordinary works of fantasy, for adults or children, published so far this century.”—TIME Magazine, on the Fairyland series

September misses Fairyland and her friends Ell, the Wyverary, and the boy Saturday. She longs to leave the routines of home, and embark on a new adventure. Little does she know that this time, she will be spirited away to the moon, reunited with her friends, and find herself faced with saving Fairyland from a moon-Yeti with great and mysterious powers.

CATHERYNNE M. VALENTE is the author of The Orphan’s Tales, In the Night Garden, Palimpsest (Hugo and Locus award nominee) and the bestselling The Girl Who Circumnavigated Fairyland in a Ship of Her Own Making. She lives on an island off the coast of Maine.

We have two copies of The Girl Who Soared Over Fairyland and Cut the Moon in Two up for grabs – one for US residents, one for UK residents! The giveaway will run until Sunday, January 26 at 12:01am EST. To enter, use the form below!