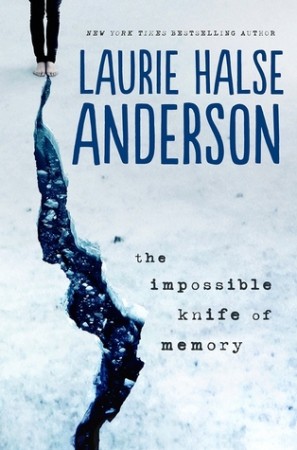 Title: The Impossible Knife of Memory

For the past five years, Hayley Kincaid and her father, Andy, have been on the road, never staying long in one place as he struggles to escape the demons that have tortured him since his return from Iraq. Now they are back in the town where he grew up so Hayley can attend school. Perhaps, for the first time, Hayley can have a normal life, put aside her own painful memories, even have a relationship with Finn, the hot guy who obviously likes her but is hiding secrets of his own.

Will being back home help Andy’s PTSD, or will his terrible memories drag him to the edge of hell, and drugs push him over? The Impossible Knife of Memory is Laurie Halse Anderson at her finest: compelling, surprising, and impossible to put down.

Why did I read this book: Confession: I never read a Laurie Halse Anderson novel before and always wanted to try one of her books. This seemed like a good place to start.

My first experience reading a Laurie Halse Anderson novel: not as impacting as I was expecting. All the more surprising when considering the topic. But…I am ahead of myself.

Memory is a funny thing. We tend to cherish our good memories and store them for future consumption at times of need. But what happens when there is not only a dearth of good memories but memories so terrible they are debilitating and ultimately unbearable?

The Impossible Knife of Memory tackles those questions and more in a story that contemplates the impact that Post-Traumatic Stress Disorder has on the person that suffers it and on those closest to them.

Andy is an American veteran of recent wars, struggling to cope with being back home, plagued by memories and nightmares that are nearly incapacitating. He is unable to keep a job, his personal life is in shambles and the closest person he has is his daughter Hayley.

Hayley is the main narrator: a teenager whose life has been completed altered by her father’s PTSD. She has been unschooled for years, when her father had been a truck driver but now they are settled back in his home town. Hayley is back to school but finds it extremely difficult to fit it in – not only because she is behind but because she is unable to let go of the constant fear she lives in: the fear that her father might do something bad; the fear that she will go home one day and her father will once again turn violent, or not recognise her. As a result, she lives in a very precarious edge: constantly prepared for the worst, experiencing constant fear herself. In fact, one of the most impacting things about the book is how, a lot of times when Hayley was describing her emotions and the terrible gripping fear she experiences about her father’s mental health, I thought she herself experiences symptoms of PTSD. It makes sense doesn’t it? HER life has been a constant question mark, experiencing ultimate fear for her father, for herself.

Both Andy and Hayley have found different ways of coping too: for him it’s turning to drugs and alcohol to alleviate his nightmares. For her, it’s becoming a caustic, aloof outsider shutting herself out from not only other people but from possibilities of a future. But neither way of coping can be completely successful and have potentially destructive results. Settling down then turns the worst of their choices into their heads but also opens a window to a healing opportunity.

Andy gets worse to start with: not moving around constantly, having to get a proper job allows for the nightmares to find root. Hayley forms close connections to friends and starts to fall in love with Finn. This in turn, gives her a chance to think a brighter future is possible. But her worry about her father is something that constantly pulls her down.

Hayley’s narrative is a reflection of this contrast between light and shadow, between fear and hope. Her voice is engaging and carries the novel well.

That said, for the first two-thirds of the novel, the narration signals very clearly that something Bad Is Going To Inevitably Happen and at times this felt extremely forced. Worst of all is when after so much build-up the Bad Thing happens and it is life-altering but portrayed in a way that seemed too…tamed? Naïve? I have nothing at all against a hopeful ending but here it seemed rather abrupt, underdeveloped and at odds with the rest of the novel.

I had misgivings with regards to the romance between Hayley and Finn too. Although it eventually won me over because Finn proved to be a good guy and a good fit for Hayley, I thought the beginning of their romance to be extremely problematic in the way that it romanticised Finn’s creepy behaviour. We are talking about a charming guy who – led by the best of intentions – basically stalked Hayley until she capitulates. At one point, he sent her to a football game to write an article for the school’s newspaper only to show up there to say they were actually on date. There is no inviting, no asking, just assuming she’d be ok with this. That this goes unremarked left a bad taste in the mouth.

As you can tell, I am not completely head over heels in love with The Impossible Knife of Memory. I’d say Hayley’s voice and the portrayal of lives destroyed by PTSD were the novel’s greatest assets but they were marred by an uneven execution and unchallenged problematic aspects to the romantic relationship.

So that day after detention I made it home from school in one piece, pissed and hungry and determined to ignore all my homework. Dad’s pick-up was parked in the driveway. I put my hand on the hood: stone cold. I checked the odometer; no extra miles since I left that morning. He hadn’t gone to work again.

I unlocked the one, two, three, four locks on the front door of our house. (Our house. Still felt weird to put those two words together.) Opened the door carefully. He hadn’t put the chain on. Probably slept all day. Or he was dead. Or he remembered that I had gone to school and that I was going to come home and that I’d need the chain to be off. That’s what I was hoping for.

Reading Next: Reflections by Roz Kaveney

Book Review: The Boy on the Bridge by M.R. Carey