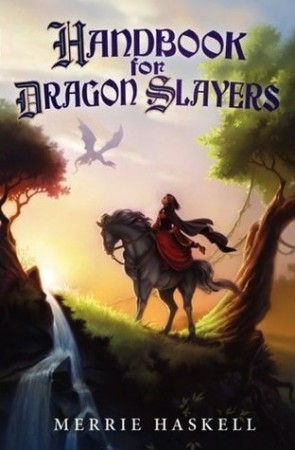 Tilda has never given much thought to dragons, attending instead to her endless duties and wishing herself free of a princess’s responsibilities.

When a greedy cousin steals Tilda’s lands, the young princess goes on the run with two would-be dragon slayers. Before long she is facing down the Wild Hunt, befriending magical horses, and battling flame-spouting dragons. On the adventure of a lifetime, and caught between dreams of freedom and the people who need her, Tilda learns more about dragons—and herself—than she ever imagined.

Merrie Haskell, author of The Princess Curse, presents a magical tale of transformation, danger, and duty, starring a remarkable princess as stubborn as she is brave.

Why did we read this book: Because we both absolutely loved The Princess Curse another Historical Fantasy MG from this author. (Thea’s note: I am taking credit for this because I discovered Merrie Haskell first and forced Ana to read the book. THAT’S RIGHT.)

Starting a review – as we usually do – with a quick summary of the book makes one inevitably think about the official summary of a book. Sometimes it is really interesting to read a book and realise what the cover copy does not tell you and then wonder why.

Tilda is a princess of a small stronghold in the Rhine region. As a princess, she has endless duties and responsibilities including account-keeping. Passionate about writing and reading, what she would really like to do is to write her own book, ideally in a convent where she could be left alone to do her own thing. The opportunity to do so arises when a cousin imprisons her and steals her lands. Tilda manages to escape and even though her conscience tells her she should be worried about her people, now under the rule of a terrible man, she can’t help but to feel relieved to be liberated from her duties. She goes on the run, joined by her two best friends who are wannabe dragon slayers – and this turns into a perfect opportunity to write her own handbook (cue title).

Handbook for Dragon Slayers is an adventurous tale that combines a quasi-medieval setting with dragon slaying, the Wild Hunt, Magical Horses, and a young princess stuck between doing what she wants and doing what she needs to do.

What the official blurb does not tell you: Tilda has a clubfoot and this disability informs a lot of the character’s inner struggles, her actions and decisions. Tilda has dealt with her disability her entire life and most of her motivation in the book comes from the hurdles she finds along the way because of her foot – they are both psychological (folks in this faux medieval context tend to associate her foot with Evil and often mistreat/mistrust her) and physical (she feels constant pain, can’t walk without a crutch, her mother won’t let her do anything remotely physical, she barely leaves her room). I found it fabulous the way that the author made Tilda’s desire to be a writer a complex mixture of truly loving books and writing but also a very understandable psychological need to be alone and isolated from people who would hurt her. Actually, Tilda’s entire arc is complex and it needs to be clearly stated that this is a book about a character that simply happens to have a disability. Her clubfoot is very important to her and her story but not all that the story is about. When she goes on the run she experiences a measure of freedom she never experienced before when she is outdoors, when she is learning that she can do more than she ever thought possible (like, for example ride a horse if she has the right set-up). At the same time though, this is most certainly not a cheesy story about defeating disability and I really appreciated the fact that in spite of the fact that book is very firmly fantasy and it does feature magic, Tilda’s foot is not magically cured [1. This is a huge pet peeve of mine and one of the reasons I didn’t like the ending of Peter Nimble and His Fantastic Eyes]. The author wrote a really interesting post about her decision to not have a magical cure and about her own personal experience with disability.

At the end of the day this is really a story about a young girl learning what she can do – as a princess and as someone who happens to have a clubfoot. It is about creating possible scenarios where she is productive and wanted, where she is dealing with duty, personal responsibility and expectations placed on her for being a princess as well as trying to have a measure of freedom to do what she wants. I loved that there are no clear answers but a resolution that fit the character, the setting and the story really well. The scenario above is also applicable to another female character in the book as well – Tilda’s handmaiden Judith who is equally struggling to find a place in the world between her duties and fealty to Tilda and her own desire to be an adventurous dragon slayer. I loved how gender is not really an issue here – this is a book more about class than gender, which I thought very interesting.

Beyond those, the story itself is super fun with a fantastic adventure featuring dragons, the Wild Hunt magical horses and escapades. Unfortunately, on the down side, I didn’t think those disparate elements meshed as seamlessly as the disparate elements did in The Princess Curse – there were random things there that felt excessive and underdeveloped. Still, this is a highly recommended Middle Grade read. Merrie Haskell is an auto-buy for me now.

Well. Ana’s basically said it all with regard to Tilda’s character and her particular arc. Suffice it to say, I agree with almost everything – although I do want to say that I feel the blurb for this book obfuscates a major cause of conflict in the text. This is NOT just a book about a young princess that goes off to slay dragons with her friends; it’s a book about a young woman who struggles with her role as the sole heir to a freestanding kingdom (small and poor as it may be) because of the way her vassals perceive of her, in large part because of her splayed foot. It’s the book about the expectations and prejudices of people around her, and her own inner turmoil as she fights between dutiful responsibility and freedom. As Ana says, this is not a book that is solely about a girl with a disability, but it is a part of Tilda and does play a large defining role in her decisions and thoughts throughout the book. Also, for the record, I want to agree with Ana in that I’m very glad there was no magical cure for Tilda’s disability. (Although I will say that I love the way that this particular conflict is resolved, and how magic is involved as well as a kiss to break a spell – just not in the way you think it would be.)

So. Since Ana has already extolled the awesomeness of Tilda’s character, I will focus on the other elements of Handbook for Dragon Slayers that rocked and deserve attention: the secondary characters of Judith and Parz, the worldbuilding (i.e. the wonderful mashup of different fairy tales/myths/histories), and the animals. In fact, I’ll start with that last part, because Handbook for Dragon Slayers is a wonderfully misleading title. Something that bothers me with certain dragon books (primarily, I’m thinking of Marie Brennan’s recent A Natural History of Dragons) is this need to KILL dragons – and Haskell’s novel starts out in much of the same vein, as a trio of youngsters, keen on earning a little bit of respect (or in Tilda’s case, escaping responsibility) traipse across the countryside, looking for dragons to slay. According to all of Tilda’s reading and studies, Dragons are EVIL and must be killed. In fact, they’ve been killed by all the saints across the centuries – their tales have been written in ink, and therefore must be true, right?[3. On a side note, I love that the written word is NOT something that is paramount in this book and that this is called out – when Parz is mystified that something written down could possibly be wrong (especially if written in LATIN). I took this as a subtle nod towards religion and religious texts – and the lack of accuracy in those. Very cleverly done.] WRONG. I love that the idea of an animal being inherently evil (and therefore hunted to death) is addressed here, and how Tilda and her friends realize and come to understand the nature of dragons as intelligent creatures (and are not by default demonic). Similarly, Handbook for Dragon Slayers is also a book about horses – both of the magical and non-magical variety – and while I’ve never been a horse-specific book fan, I am always kind of a sucker for human-animal friendship books. And the horses that Tilda, Judith, and Parz befriend in this book? They are AWESOME.

Also awesome are Tilda’s friends – in particular, Judith. I love Judith so much (not as much as Tilda, but almost). A handmaiden to Tilda whose life and future are bound to Tilda’s (as Judith is a noblewoman but without any land), Judith is a fierce friend with a warrior’s heart. I love how she balances Tilda, and the friendship between these two characters. I also love Judith’s no-nonsense attitude towards the romantic (pariticularly her reaction to the story of the swan maiden who is tricked into marriage and her preferred version of the tale) and her deep sense of right and wrong, and responsibility and duty.

Finally, I can’t finish this review without elaborating on the worldbuilding in this book. Like with The Princess Curse, Handbook for Dragon Slayers is a novel that combines fairytales, myths, and legends – in the case of this newest novel, there’s a bit of the Wild Hunt, the Swan Maiden (with a dragon twist), and the frightening tale of Bluebeard and his unfortunate wives. Although I do think The Princess Curse manages to blend myths slightly better than this sophomore effort, I love the author’s mashup sensibilities, and I LOVE the Bluebeard story when it’s retold in a way that empowers the heroine.[5. I do not love creepy retellings that romanticize this fable. *shudders*] Needless to say, I was a fan of this book, and I love its many twists and turns, its sense of duty and consequences.

In other words: I am a fan. Merrie Haskell is one of my new favorite authors, and Handbook for Dragon Slayers is in the running as one of my notable books of 2013.

Notable Quotes/ Parts: You can read an extended 80 page sample of the book thanks to Harper Collins’ Browse Inside feature!

Ebook available for kindle US, kindle UK, nook and itunes