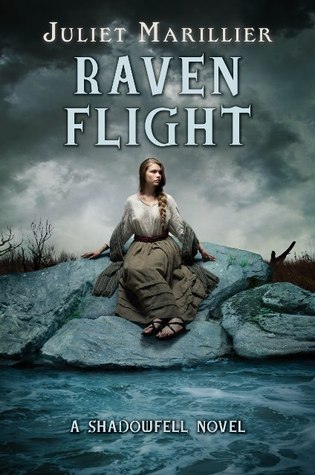 Neryn has finally found the rebel group at Shadowfell, and now her task is to seek out the elusive Guardians, vital to her training as a Caller. These four powerful beings have been increasingly at odds with human kind, and Neryn must prove her worth to them. She desperately needs their help to use her gift without compromising herself or the cause of overthrowing the evil King Keldec.

Neryn must journey with the tough and steadfast Tali, who looks on Neryn’s love for the double agent Flint as a needless vulnerability. And perhaps it is. What Flint learns from the king will change the battlefield entirely—but in whose favor, no one knows.

Stand alone or series: Book 2 in the Shadowfell series

How did I get this book: ARC from the Publisher + Bought

Why did I read this book: Juliet Marillier is one of my all-time favorite authors – I adore her adult novels (especially her Sevenwaters books), and I love her young adult fiction dearly, too. While the first book in the Shadowfell series didn’t quite meet my – admittedly very high – expectations, I still thoroughly enjoyed it and eagerly anticipated the release of this second book in the series.

After arduous weeks on the road, pursued across Alban by the king’s Enforcers, Neryn has found solace at Shadowfell. The homebase for the leader Regan and his brave followers, it is at Shadowfell that Neryn gathers her strength and gradually learns the way of the rebels who stand against the cruel King Keldec. Her winter’s reprieve, however, is short-lived. Neryn’s fate as Caller, possessing the incredibly rare canny gift of calling upon the Good Folk, means that she must leave the rebellion stronghold and take to the road once more. Neryn must journey to the west, the north, and the east to find the other ancient Great Ones – the strongest and oldest fae Guardians, who will train her to use her gift to unite humans and the Good Folk in a battle against the evil that has torn the land apart. It is Neryn’s incredible gift that will turn the tide of the war, giving the rebels the edge that may mean the difference between freedom or annihilation. Time is short, though, and with the first spring thaw, Neryn sets out on her perilous task with the rebellion’s toughest warrior, Tali, to protect her. Together, Neryn and Tali walk the treacherous, unprotected roads at the mercy of the King’s formidable enforcers on a nigh impossible quest, the success of which the entire future of Alban hinges.

The second novel in Juliet Marillier’s Shadowfell trilogy, Raven Flight picks up Neryn’s story as she heals from long months on the run with Flint in Shadowfell. And I’m happy to report that Raven Flight, in my opinion, is a far better book than its predecessor. Neryn takes to the road again in this installment on another journey fraught with peril – the difference is that this time, Neryn isn’t falling in love with her travel companion (which makes for an incredibly cheesy reading experience), and she’s not essentially helpless the entire time. The real reason this book is better than Shadowfell, to me, can be summed up in one word: Tali. Neryn’s travel companion and new bodyguard, Tali is a curmudgeonly warrior, a pitiless taskmaster, who is both fiercely proud and fiercely loyal to her cause. It is Tali’s stubbornness, her blend of physical prowess and emotional vulnerability (buried, of course, underneath layers and layers of protective armor) that is so appealing. Also, she’s a perfect foil for Neryn’s almost perpetually unerring perfection. I love the rapport, friendship and trust that develops between Tali and Neryn, and the confidence that both develop together as their relationship strengthens.

That said, as much as I love Tali’s character Neryn is still slightly grating in her Mary Sue-ish nature. She’s the Chosen One, who is unerringly kind and unerringly respectful of the Good Folk – basically, Neryn is able to win everyone over with her goodness. One huge improvement on Shadowfell, however, is Neryn’s capability and competence in this second book. I love that under Tali’s tutelage, Neryn becomes capable of defending and caring for herself both physically, and emotionally (well…ok, mostly). Instead of relying on those stronger than her to protect her and carry her along – because, of course Neryn is a frail waif that needs attention and protection – Neryn learns to use her magical gift in a proactive way, and gains a modicum of physical and survival competence. And, even though Neryn isn’t ever going to be a physically powerful warrior like Tali, I appreciate that she decides to fight for the cause she so desperately believes in, even when the odds are stacked against her.

As with the first book, and per Marillier’s standard, the writing in Raven Flight is near flawless; the prose is lush, the worldbuilding once again exceptional. I love the different tasks Neryn is charged with in this book, the tests that she endures, and the closer look at more of the Good Folk and the importance of lore and tradition. Juliet Marillier’s strength is not just in her extensive knowledge of folklore, but her ability to twist those tales and legends to her own ends – and such is true in Raven Flight with the involvement of other schools of fae and the Guardians that must train Neryn to her task. Additionally, from a larger picture perspective, there’s some great insight given to Regan’s past, and King Keldic’s motivations in this book, which I greatly appreciated. That said, on that note, the only weak parts of the book in terms of execution and writing rested with the abrupt (few) shifts in perspective, stepping outside of Neryn’s narrative, and the slower pacing of the novel through the first 200 pages or so. This is a slower burn of a read, but the lack of action and lengthy exposition felt a little lopsided (especially by the time the Gathering rolls around and…well, therein lie spoilers).

Finally, there’s Flint. I appreciated the lack of Neryn’s boyfriend in this second book (although I might be in the minorty on this one); I actually think the book, and Neryn in particular, benefits from Flint’s absence (and Tali’s presence). To be completely honest, the relationship between Neryn and Flint feels forced to me; too rushed, too absolute, and lacking the slow, sweet intimacy that I have come to expect from Marillier’s pairings – as much as it pains me to say it. I love that the focus here in Raven Flight is not on romance against all odds, but rather on the risks and hardships of being soldiers in a secret, high stakes war.

Ultimately, I was very, very pleased with Raven Flight. From Neryn’s growth as a protagonist, to the amazing addition of Tali as a central character, to the development of Alban and its rich Good Folk, I loved this book. Absolutely recommended, and I cannot wait for the next book in the series.

As the lone traveller approached, the five Enforcers spread out in a line across his path. They waited in silence, a team of dark-cloaked warriors in full combat gear, astride their tall black horses. The fellow was roughly dressed – hooded cloak of grey felt, woollen leggings, battered old boots – and carried only a small pack and a staff. His gait was steady, though his head was bowed. He looked as if he’d been on the road a while.

‘Halt!’ called Rohan Death-Blade when the traveller had come within ten paces and showed no sign of stopping. ‘State your name and your business in these parts!’

The man raised his head. The lower part of his face was covered by a cloth, like a crude imitation of the mask Enforcers wore on duty to conceal their identity. Above this concealment a pair of clear grey eyes gazed calmly at the interrogator. The man straightened his shoulders. ‘Have I been gone so long that you’ve forgotten me, Rohan?’ Though harsh with exhaustion, the voice was unmistakable. They knew him before he peeled off the makeshift mask.

‘Owen! By all that’s holy!’ Rohan removed his own mask, swung down from his mount and strode forward to greet their long-absent commander. The others followed, gathering around Owen Swift-Sword. ‘Where’s the rest of Boar Troop? We expected you long ago. When will they be here?’

‘Not today.’ A long pause, as if the speaker had to dig deep for the strength to say more. ‘I must speak to the king. Straight away. Have you a spare mount?’

‘Take Fleet,’ said Rohan Death-Blade. ‘I’ll go up behind Tallis. You’d best get yourself cleaned up before you see the king; you stink like a midden. Don’t tell me you walked all the way from Summerfort.’

‘I have … ill news. Grave news. Keldec must hear it first.’

Something in his face and in his voice halted further questioning. They knew that look; they understood the sort of news that rendered a man so grim and taciturn.

The king’s men mounted their horses and turned for Winterfort. Their troop leader rode with them. Nobody spoke a word.

Reading Next: Trading in Danger by Elizabeth Moon