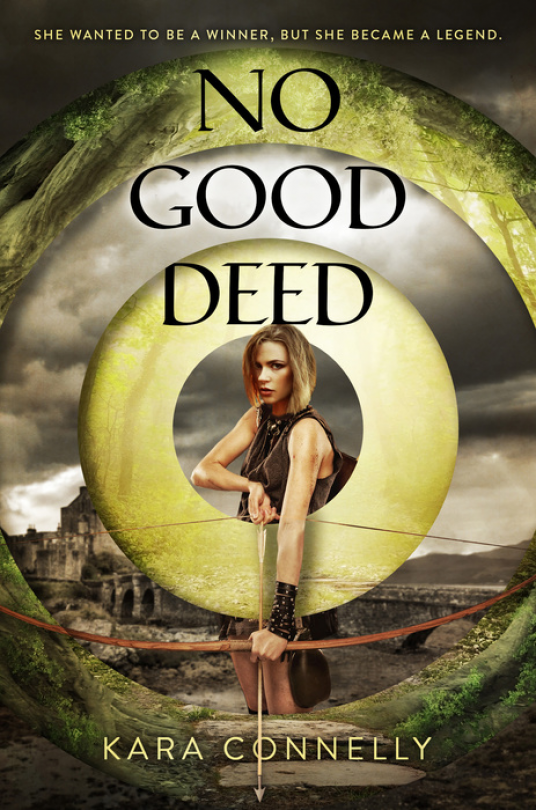 Fans of Dorothy Must Die will love this reimagining of the legend of Robin Hood. Girl power rules supreme when a modern girl finds herself in the middle of a medieval mess with only her smart mouth and her Olympic-archer aim to get her home.

Ellie Hudson is the front-runner on the road to gold for the U.S. Olympic archery team. All she has to do is qualify at the trials in jolly old England. When Ellie makes some kind of crazy wrong turn in the caverns under Nottingham Castle—yes, that Nottingham—she ends up in medieval England.

Ellie doesn’t care how she got to the Middle Ages; she just wants to go home before she gets the plague. But people are suffering in Nottingham, and Ellie has the skills to make it better. What’s an ace archer to do while she’s stuck in Sherwood Forest but make like Robin Hood?

Pulled into a past life as an outlaw, Ellie feels her present fading away next to daring do-gooding and a devilishly handsome knight. Only, Ellie is on the brink of rewriting history, and when she picks up her bow and arrow, her next shot could save her past—or doom civilization’s future.

Eleanor Hudson is a natural on the field. Armed with a bow and quiver, she becomes “Iron Ellie”–a born competitor and an Olympic-level archer with dreams of medaling at the next summer games. Before she can make that dream come true, however, Ellie needs to improve her international ranking and put in a strong showing at qualifying trials in England’s Sherwood Forest. Ellie all but has the competition in the bag when on her last shot, an apparition in a medieval monk’s robe walks on the pitch and throws off her game. When she goes to investigate (and give said medieval-costumed monk a piece of her mind), however, things get… weird.

Ellie finds herself literally stumbling through a time warp, transported from quiet, touristy 2017 Nottinghamshire to medieval, twelfth century Norman England. Unfortunately, her sudden appearance in the Nottingham castle courtyard is just as surprising to the local soldiers as it is to her, and Ellie finds herself running for her life from the honest-to-goodness Sheriff of Nottingham. Luckily, she has her wits and sass about her–not to mention her skill with a bow–and assumes her brother’s name and identity, Robert Hudson.

As Rob of the Hood becomes Nottingham’s Enemy #1, Ellie is desperate for a way to get home–but also can’t help but want to help the people of Nottingham. Especially as along the way, she makes some important new friends: a knight-turned-Friar, back from the Crusades; a kindhearted noblewoman now sent away as a nun in the sisters of Marian; an extraordinarily large and burly smithy, and his charming if rakish outlaw partner.

Ellie suspects that she’s in the past because there’s something she needs to do–some historical event in which she must play a pivotal role. Even with that goal in mind, Ellie knows there are two rules she needs to always keep in mind: don’t die, and don’t change the future. When Prince John and Eleanor of Aquitaine enter the picture, the second rule becomes harder and harder to obey–especially as it might conflict with rule number one. Somehow, Ellie must find a way to complete her task and return home… or there might not be a home to return to.

When I picked up No Good Deed, it was on a whim. The Dorothy Must Die comparison made me incredibly wary (not my favorite retelling), but I liked the idea of an Olympic-level archer stumbling through a time warp and haven’t read a Robin Hood spinoff novel. What I wasn’t expecting was for the protagonist–a teenage girl named Ellie–to actually be Rob of the Hood (aka Robert, son of Hudson) when she stumbles through that time portal. Honestly, in a worst case scenario kind of way, I was half-expecting Ellie to stumble into the past and fall instantly into infatuation with a medieval outlaw who turns out to be Robin Hood–which would have been the easy, formulaic, crap YA paranormal romance way of doing a reimagined myth. Thankfully, Kara Connolly completely abandons that particular formula and gleefully subverts the Robin Hood legend with a young woman in the titular role. It is freaking awesome. I loved the way Connolly invoked the different aspects of Rob and his merry men in Ellie’s adventure–from the tenuous relationship with Will Scarlett and Little John, to the reimagining of Friar Tuck as a love interest and Maid Marian as a friend in a priory. But beyond clever callouts to classic characters and their integration into the overall story, I also greatly appreciated Connolly’s inclusion of historical figures–Prince John and his mother, Eleanor of Aquitaine (Ellie’s actual namesake)–in the mix.

From a character perspective, No Good Deed works because Ellie is brash and outspoken but feels genuine and wholly believable as Rob of the Hood. Her skill with a bow–and Kara Connolly’s ability to write those shooting scenes–helps with the suspension of disbelief. I loved Ellie’s driving internal struggle and the tension she feels between being naturally talented, versus practice, mental preparedness, and finding the right moment for a big shot. It’s this particular blend of intuition and honed skill that makes her so appealing, at least to me as a reader. Her narrative is sassy, but never too much so and certainly doesn’t cross into frustrating pop-culture-anachronisms (as seen in the referenced Dorothy Must Die sales handle in the book’s opening descriptive paragraph), which is a huge relief and makes Ellie’s tale far more sympathetic. Her relationship with her family, particularly her lost brother whose identity she assumes in the past, is particularly well-done in this novel, too.

Of course, I’d be remiss if I didn’t point out that No Good Deed is very much the story of a young Caucasian woman with blonde hair who travels back in time and is suited for the time-righting task at hand. She’s the daughter of two professors who can afford to take their family to England for a holiday/Olympic qualifying competition (in an expensive, highly specialized sport), and has by all accounts lived a safe, sheltered, upper-middle-class life. Thanks to her medieval historian mother, Ellie also is fairly well-versed in Norman England history and understands the importance of certain events (namely: John needs to stay alive to make sure the Magna Carta happens). Also thanks to her upbringing, Ellie can speak French as well as English–and while her accent and modern dialect of both languages isn’t the smoothest, it means that she isn’t wholly out of place in the past. This all works within the context of the novel–but it’s something to point out and acknowledge, as so many mainstream time-warp stories necessarily follow this type of mold.

As for the time travel and universe-mission itself? No Good Deed borrows from the Back to the Future school of time meddling: Ellie needs to accomplish something in the past that changes the future in a personally positive way (and even, ultimately, involves a scrap of paper that is passed along over the centuries). While that may sound cynical, I’m all for it–Ellie’s mission in the past, which isn’t discovered until late in the book, is delightfully unexpected and well-executed, like one of Ellie’s signature shots.

Ultimately, that’s the story of this particular Robin Hood retelling: delightfully unexpected and well-executed. Wholeheartedly recommended for those looking to escape from the present with a heroine of legend and her merry men.