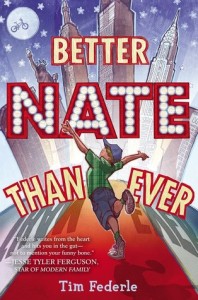 Title: Better Nate Than Ever

Nate Foster has big dreams. His whole life, he’s wanted to star in a Broadway show. (Heck, he’d settle for *seeing* a Broadway show.) But how is Nate supposed to make his dreams come true when he’s stuck in Jankburg, Pennsylvania, where no one (except his best pal Libby) appreciates a good show tune? With Libby’s help, Nate plans a daring overnight escape to New York. There’s an open casting call for E.T.: The Musical, and Nate knows this could be the difference between small-town blues and big-time stardom.

Stand alone or series: Stand alone but there is a sequel in the works.

Why did I read this book: I completely missed the book when it first came out last year. It wasn’t until it made several Best of lists (including some of our Smugglivus guests) recently that I decided to read it.

Nate Foster is a huge Broadway enthusiast who dreams about one day making it big and starring in a play. When he learns about the open casting call for ET the Musical, he “borrows” his mother’s credit card and with the help of his best friend Libby plans a daring overnight trip on his own, all the way to New York. There, the adventure of a lifetime awaits: in between meeting other children and star-wannabes and meeting an estranged family member, Nate prepares as much as he can for this one chance at stardom.

Better Nate Than Ever is a fun, funny, light and heart-warming novel about an extremely talented young boy who dreams big and dares to go after the dream. The story is narrated in first person present tense (more on that later) and Nate’s light and breezy attitude are both delightful and charming. His friendship with best friend Libby is a highlight: they are loyal to each other and share an almost encyclopaedic knowledge about musicals (and like to use legendary Broadway flops as cursing words: “Holy Dance of the Vampires, no!”).

What’s perhaps most impressive about Better Nate Than Ever are all the more serious, underlying emotional themes that sit beneath the breezy tone of the novel. As a smalltown boy, Nate is overcome with admiration for everything in NY: the sheer size of the place, the food (especially the huge Applebee’s) and the opportunities and freedom the big city offers. Chief among them is the chance to escape even if for a few hours, the stress of his family life and the concerned pressure exerted by his parents and older brother that he should follow a prescribed ideal of masculinity so that he can “fit in”. He is mercilessly teased by his own brother and struggles with constant bullying from school mates.

Nate himself is very clear where he stands on the subject of his sexuality and that is, not clear at all:

My sexuality, by the way , is off-topic and unrelated. I am undecided. I am a freshman at the College of Sexuality and I have undecided my major, and frankly don’t want to declare anything other than “Hey, jerks, I’m thirteen, leave me alone. Macaroni and cheese is still my favorite food— how would I know who I want to hook up with?

One of the most impacting scenes in the book though happens when this exuberant, freeing lack of self-definition meets the moment when Nate sees two boys dancing together:

“Two boys were dancing together in a club,” I want to say, “and nobody stopped them.”

The emotional importance of that scene (quoted below) to Nate and the impression it leaves is beautifully rendered by the author.

On the downside, the first person present tense narrative is not entirely convincing because of certain narrative tricks Nate plays: cutting the narrative and returning to it later at the moment something important happens so that tension is added. Those moments unfortunately, felt rather forced and might speak to it being the author’s first novel.

I already pre-ordered the second book, Five, Six, Seven, Nate! which will be released in late January.

Notable quotes/Parts: This is the scene following the moment Nate sees the two boys dancing together:

“Two boys were dancing together in a club,” I want to say, “and nobody stopped them.”

But instead I say, “I want to be on Broadway, and you can’t do that forty-five minutes outside of Pittsburgh. Have you ever been to Pittsburgh?”

“Yes, actually. Right out of college, I did a kind of bad postmodern Chekhov thing, set in the Holocaust era— which is just always a really bad idea— at the Public Theater.”

Ah, yeah, the Pittsburgh Public. I asked Mom if I could see a show there, once, but she said the themes were too adult, switching on another Disney movie in the VCR. We don’t even have a DVD player.

Now, I would do anything to sit through Freckles’s bad Holocaust production of Chekhov . My new hero Freckles.

“But you’re right, Nathan. Even when you live in Astoria, there’s nothing like New York.” “I know!” I say. “There’s cupcake places, like, everywhere, and boys can dance next to each other.” But I don’t actually say the part after the cupcake part.

“Cupcake places,” Freckles says, twinkling again. I guess he hasn’t stopped to think about what’s so great in New York, in a while.

Reading Next: Tinder by Sally Gardner

From the Page to the Screen: 30 Days of Night