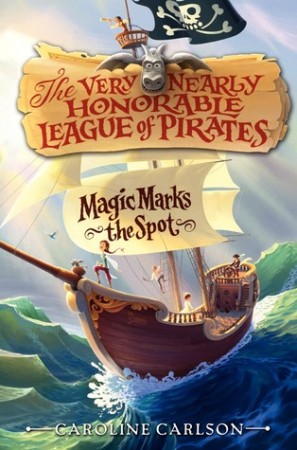 Hilary Westfield has always dreamed of being a pirate. She can tread water for thirty-seven minutes. She can tie a knot faster than a fleet of sailors, and she already owns a rather pointy sword.

There’s only one problem: The Very Nearly Honorable League of Pirates refuses to let any girl join their ranks of scourges and scallywags.

But Hilary is not the kind of girl to take no for answer. To escape a life of petticoats and politeness at her stuffy finishing school, Hilary sets out in search of her own seaworthy adventure, where she gets swept up in a madcap quest involving a map without an X, a magical treasure that likely doesn’t exist, a talking gargoyle, a crew of misfit scallywags, and the most treacherous—and unexpected—villain on the High Seas.

Written with uproarious wit and an inviting storyteller tone, the first book in Caroline Carlson’s quirky seafaring series is a piratical tale like no other..

Why did I read this book: It’s a pirate book! For girls! This one was also a Middle Grade Editor’s BUZZ book at BEA this year and I saw that panel and the editor made it sound incredible.

Hilary Westfield dreams of being a pirate and has been preparing herself with serious dedication her whole (short) life. With her perfect knots and her more than adequate knowledge of sword-fighting, there is no better candidate to join the Very Nearly Honorable League of Pirates. To Hilary’s delight, her application letter is successful, until the League realises she is in fact a – GASP – girl and withdraws their acceptance. And not only is Hilary denied her well-deserved place in the League but to her horror her High Society parents send her to Miss Pimm’s Finishing School for Delicate Ladies where they believe she belongs and where Hilary is certain she will languish and possibly die of boredom.

And even if the school turns out to be not so bad – at least she has a new good friend in Clare and her family’s magic Gargoyle is on her side – she still wants to be a pirate more than anything in the world. So when the opportunity arises to join the crew of the freelance pirate Jasper “Terror of the Southlands” Fletcher, she takes it.

However, her acceptance in his crew is not without its caveats and full approval is dependent on her success in finding the most famous hidden treasure of all times ever: the trove of magical ore hidden by the Enchantress before she disappeared from history. And Hilary has only a blank map without an X, the help of her friends old and new, and reliance on her own wits to succeed. Failure is not an option especially when her own father turns out to be a Despicable Villain.

Magic Marks the Spot is fun, light and a delight to read. It’s a linear narrative but peppered throughout (at the end of each chapter) with clippings from newspapers, excerpts from guides (like the “Young Lady’s Guide to Augustan Society” or “Treasure Hunting for Beginners”) as well as the incredibly awesome letters between Hilary and Clare – all of those adding important backstory without cumbersome in-story info-dumping.

Those additions also serve the purpose to make the plot actually much more than what we are led to believe at first by going beyond Hilary’s personal adventure. Magic Marks the Spot is set in an alternate world where the world’s greatest treasure is magic ore which can be transformed and adapted to be used by the ones lucky enough to possess it. The story opens at a moment in time when only but a handful of High Society families are said to have the last few magic objects (like Hilary’s speaking stone Gargoyle). This is a subplot that runs through parallel to Hilary’s story and much to my delight becomes all the more important as the story progresses. This storyline is fodder for really interesting dialogue about privilege and class distinction on top of all the great gender stuff the book does so well.

Because, thank heavens, this is an adventurous pirate book for girls, about girls and with girls everywhere. The League of Pirates (as well as the better-regarded Navy) do not accept girls but the narrative makes sure to show this as nothing but sexism. It also does not elevate Hilary above other girls by making her super special or different from any other girl and it was brilliant to see other women and other girls being equally capable and smart. I also loved how even though Miss Pimm’s Finishing School for Delicate Ladies is obviously not the right place for Hilary it doesn’t mean that it’s not the right place for other girls and that they are no less awesome for choosing different paths. Similarly, it was great that Hilary never wavered in her path to piracy and success and that her ambition was never shown negatively.

Now, as much as the zany, light tone fits the story really well, it sometimes ran amok especially when the story took more serious turns. It was hard to buy that Hilary would not be too fazed at the revelations about her father OR that the characters were in any real danger at all. Similarly the idea that the pirates in this world were “very nearly honourable” made it impossible to take their presumed infamy, blood-thirst and violence seriously and the overuse of words such as “rapscallion” and “scallywag” when referring to them didn’t help (one could definitely argue that this is exactly the point and that the pirates obviously followed a code of honour).

Notable Quotes/Parts: No written excerpt but you can listen to an audio one here.

Reading Next: The Real Boy by Anne Ursu