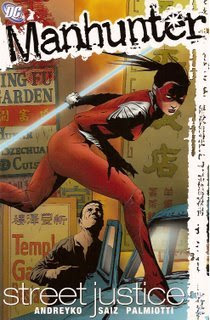 Prosecuting super-villains has been her life’s work. But these criminals never stay locked up for good. Now–using confiscated metahuman weaponry she raided from an evidence locker–Kate tracks the perps who have eluded justice in the courts and delivers a long-overdue eye for an eye!

She is the Manhunter.

And she likes it!

Why did I read this book: DC. Superheroes. Finally a chick vigilante, sans superpowers, and in my home of Los Angeles (not Gotham or Metropolis)?! How could I resist?

Kate Spencer is, for lack of a better word, a bitch. She’s a top dog Federal Prosecutor in Los Angeles, an estranged ex-wife, a chain smoker, and not much of a mother. She’s also at the end of her rope–the legal system that she fights tooth and nail for (though, it would seem part of her ferocity stems from her own competitive darkness rather than moral ideals) is broken and flawed. Street Justice opens with Kate on a tough case, trying to put away a metahuman killer named Copperhead who has murdered–and eaten–numerous innocent people on his latest rampage. Kate argues that this is a monster and should be locked up, but the defense takes the line of “he’s a victim of his monstrous genetic mutation and therefore cannot be held accountable for his actions”. Unfortunately for Kate, the jury buys it–and Copperhead walks. Kate is PISSED. When she hears that evening, shortly after the trial the killer has escaped his transport and is on the rampage yet again, Kate takes matters into her own hands. She dresses in a disguise, and using her court clearance, raids the evidence room for a sufficient weapon–selecting a bow that emits a powerful supercharge.

Kate hits the streets, and catches up to Copperhead–and, she kills him, leaving her name engraved on the wall, decorated with his blood: “Manhunter”. 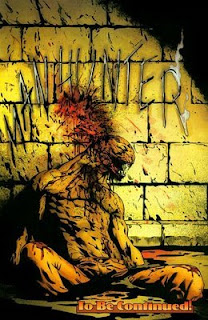 And so, Manhunter is (re)born. DC has had a couple of previous “Manhunters”–but Mark Andreyko’s vision is completely different from the previous entries. He creates a badass vigilante who doesn’t give a crap about the fine line of justice–her mission is not to turn over criminals to the police for safekeeping only for them to escape the courts and then be back on the streets. No, Kate’s mission is to find every one of those criminals, and to kill them. No prisoners, no excuses. What’s more is, she relishes in her job–searching through files for her next victim, listening to the radio for any sign of a disturbance. She tells herself that she is doing what must be done…but she’s getting a kick out of it too. It is this quality of remorseless action that sets her apart from the slew of disenchanted idealists come vigilantes–Kate likes it, and has no intention of letting any of her targets walk away from her alive. 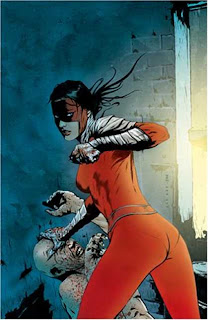 In one memorable scene, Manhunter hears about a riot in Arkham Asylum and comes to the rescue of Batman, who has been incapacitated by the inmates. No holds barred, she shoots up Batman’s captors–only to face his anger:

What makes you think you’re any different from those beasts you murdered? Who gave you the right to take a life? At least these villains acknowledge their bloodlust and don’t pretend to play hero!

For all that I love Batman, for all that I love Jim Gordon and Oracle, and characters like Superman and Wonder Woman–sometimes I can’t help but be frustrated with their inability to cross the fine line. Flirt with it, Batman may, but he will not, cannot kill his enemies–lest he prove that he is no better than them. How infuriating and heartbreaking is it to read about the Joker escaping from Arkham yet again–to handicap Barbara for life, to kill Jason? Manhunter goes balls out–pardon the expression–and gives a big eff-you to those nobler concepts. Sometimes an eye for an eye is just what I want to read–and I have to commend Mark Andreyko for giving it here, unflinchingly. 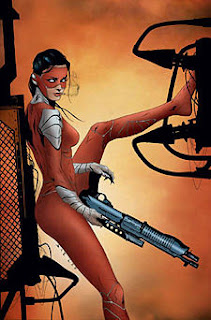 I very much appreciated this ballsy, abrasive heroine–who actually does put her money where her mouth is. In the introduction to this graphic novel, Mr. Andreyko remarks that he was shocked and delighted when DC agreed to his project and gave him the greenlight. Kate is hard, she’s not overly sexy (he makes sure to mention her relatively normal bustline), and she’s without any superpowers. She isn’t the earth mother goddess type, nor is she a sex-bomb–she just is. I like that. As a chick that does like gorgeous female superheroes in stillettos and of impossible proportions, Kate still suits me just fine.

And, what’s even cooler, is that this is set in Los Angeles. No New York City, no Gotham or Metropolis here–but good ol’ sunny, southern California. Little touches throughout the book–from Kate taking her son to eat at Mel’s to her bitching about how you need a car to get anywhere in this sprawled out city–were awesome to read (especially since, apparently, all authors live in Seattle or somewhere in the Pacific Northwest, and the east coast seems to dominate comic locales).

At the end of this collection, the JLA pays a visit to Los Angeles, to investigate the murder of a friend. Kate, who has been tangoing with the killer–Shadow Thief–as he wants vengeance for his friend Copperhead’s death, wants in. With a little blackmailed help from a former tech boy for some noteable villains (not under the witness protection program), Kate takes on Shadow Theif again, trying to get the job done before the JLA butts in. I liked the involvement of different, notable characters–Martian Manhunter, Hawkman, etc–and Kate’s lack of intimidation. The cliffhanger at the end of this volume is more than enough to hook you into frantically searching for the next novel.

I also quite liked the art for this book. The original covers, by Jae Lee, are gorgeous–I’m a big fan of his print-like style (as in The Dark Tower comics). The actual art depicted inside each issue (drawn by Jesus Saiz) is more subtle and realistic than sensational superhero art–the colors are darker and muted, the lines are simple. It suits Kate’s Manhunter perfectly–no nonsense and edgy, and it tells her story fittingly.

“So how long are you in town? I know a great sushi place in WeHo…”

Additional Thoughts: My copy, courtesy of my local Golden Apple comic book store, is autographed by writer Mark Andreyko! Not that I saw him and asked for an autograph, but the issues in the store were already signed. Still, it’s cool.

Verdict: I was completely pleasantly surprised by this new vigilante ‘hero’, and now I’m hooked on Kate. Definitely will be continuing with this outstanding series.

Reading Next: For A Few Demons More by Kim Harrison