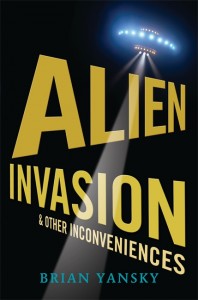 A polite race of telepathic killer aliens, a ten-second world conquest, and one teenage boy collide in this wry, gutsy adventure.

Jesse is in history class when a formidable, efficient race of aliens quietly takes over the earth in less time than it takes him to brush his teeth. Most humans simply fall asleep and never wake up. In moments, everyone Jesse knows and loves is gone, and he finds that he is now a slave to an inept alien leader. On the bright side, Jesse discovers he’s developing telepathic powers, and he’s not the only one. Soon he’s forging new friendships and feeling unexpectedly hopeful. When a mysterious girl appears in his dreams, talking about escaping, Jesse begins to think the aliens may not be invincible after all. But if Jesse and his friends succeed, is there anywhere left to go? Brian Yansky offers a funny, grim novel packed with everything boys and sci-fi fans love: aliens, humor, action, and a healthy dose of triumph.

Stand alone or series: A stand alone novel (I think? It has possibility for subsequent novels)

Why did I read this book: The cover isn’t anything remarkable, but the synopsis sounded like witty, wry fun – with aliens. And, it turns out, that’s exactly what I was in the mood for.

It’s just another day in school, listening to his history teacher drone on about The Great Depression when it happens. Jesse hears a voice – not his own – in his head.

“I am Lord Vertenomous and I claim this planet in the name of the Republic of Sanginia. You have been conquered by the greatest beings in the known universe. It took ten seconds.”

Before Jesse seriously begins to question his sanity, he notices that in the blink of an eye, everyone around him is out cold – permanently. Luckily, Jesse has a smidgen of latent telepathic ability, which has saved him from instant psychic-powered death. Labeled as “Product” by the Sanginians, Jesse and what few humans remain are herded like cattle and forced to work as slaves in their conquerors’ homes. Jesse’s taken to work in the home of the highest ranking (and most powerful) of the Saginian invaders, Lord Vertenomous himself, enduring long days of hard labor under constant threat and guard of the watchful little green men; anyone that steps out of line is instantly put down. Jesse’s future, and humanity’s future, seems impossibly bleak – but then he starts to develop strange new abilities. Jesse finds a way to talk to another girl in Lord Vert’s home, through his dreams – something that is supposedly impossible for the primitive, disconnected “Product” that is humanity. Then, he’s able to communicate with other humans during the day with his mind, even able to shield himself and others from psychic attack. And then, when rumors of resistance groups to the west begin to surface, Jesse begins to hope that perhaps there is a way out of humanity’s servitude and extinction – and together with his friends, he must find a way to escape and survive.

I hadn’t heard of Alien Invasion & Other Inconveniences and I don’t recall seeing any reviews for Mr. Yanskey’s new novel online, so I was intrigued when a review copy found its way to my doorstep. From the cover and the back blurb, I was expecting something…campy. Campy is wonderful and great (hello, my name is Thea and I am a B-movie horror and SF addict), and just what I was in the mood for, so imagine my surprise when Alien Invasion turned out to be surprisingly thought-provoking and deep YA novel! Yes, there’s a good deal of camp along the way – these are a race of polite invading aliens that always preface a death with “I’m very sorry for your loss” and the like – but it’s also a searing look at the politics and realities of colonization, slavery, and environmentalism (AND these themes are something that each of the main characters are cognizant of, too, which is a very cool plus). How different is the alien invasion (of the “greatest race in the universe”) really so different than Europeans conquering the New World? Or slavery, under threat of death, any different than our own history? Through his characters, Mr. Yanskey asks these questions, and others, too.

Of course, the most dominant feature of Alien Invasions is that of its action-laden, cinematic plot. It’s an incredibly fast-paced novel and easy to devour in a single sitting (and probably a good bet for a recommendation for reluctant readers). Told in an alternating technique – spliced between Jesse’s narrative are letters from head colonist Lord Vertenomous to the mother ship – Alien Invasions is a tautly written and fully engrossing action movie of a book. While the characters initially seem a little flat – Jesse begins as humorous, but not particularly deep – over the course of the book, we do get to see another side of his character, with his connection to his parents, his philosophy of martial arts, and his apt self-description as neither a leader nor a follower, in particular. The cast is also nicely varied, with a sure-to-be-Division I-bound running back (with a chip on his shoulder), a bitchy model mean-girl type, and a brainiac volunteerism overachiever. Again, not the most revolutionary characters in the realm of literature, but they do have their own surprising texture and depth.

I was pleasantly surprised by Mr. Yanskey’s novel, and certainly recommend it to anyone looking for a quick read (with some deceptive depth). I’ll certainly be on the lookout for more from this author.

It takes less time for them to conquer the world than it takes me to brush my teeth. That’s pretty disappointing.

I’m in history class, listening to Mr. Whitehead’s description of the Great Depression. “Everything was changed,” he says, tapping his desk with two fingers the way he does when he wants to call attention to something he’s said. I know he’s about to repeat himself because he always does after the finger tap. I turn to Jackson to mouth the sentence as Mr. Whitehead speaks it, which is something we do to combat the big-yawn boredom.

But the second sentence never comes from Mr. Whitehead. It doesn’t come from Jackson or me, either. Instead a voice comes into my head. THAT’S RIGHT. A VOICE. NOT MINE. IN MY HEAD. The voice says, “You are one of the few product who can hear. Congratulations. Stand by for a message.”

“Stand by for a message” sounds like some kind of public-service announcement, so naturally I’m thinking I’m crazy. I’m imagining I’m bound for a room with locks on the outside and keepers in white coats asking me questions along the lines of “Would you like another cookie?”

But there really is a message. It comes a second later.

“I am Lord Vertenomous and I claim this planet in the name of the Republic of Sanginia. You have been conquered by the greatest beings in the known universe. It took ten seconds.”

The world is conquered in ten seconds? Come on. Also, the voice itself isn’t particularly scary. Not like the breathy, booming voice of, say, Darth Vader. It’s more of a whisper and a little squeaky around the edges. In fact, I’m kind of disappointed that the imagination of my damaged mind couldn’t do better. But then I notice what I’ve been too freaked to notice before. No one is moving. Every single person, including Mr. Whitehead, looks sound asleep. I feel a shadow over me then, and it practically knocks me off my feet. I struggle to breathe. I force deep breaths. Then I do what you do when people are sleeping at a totally inappropriate time and in a totally inappropriate place. I try to wake them. I shake Carlee Thorton, who is the best student in school and would never, ever fall asleep in class. I punch Jackson on the arm. “Jackson, dude, it’s me, Jesse. Wake up,” I plead. He doesn’t. I don’t know it then, but this is what happens to most of the Earth’s population. They go to sleep. They never wake up.

I try my cell but it’s dead. I go out into the hall and try some good old-fashioned screaming. No one screams back. I’m all alone. It’s so quiet.

The alien voice comes back. My body jerks as if a cold hand has grabbed me from behind, and my heart, which definitely wasn’t doing a slow jog before, sprints. The voice says, “It should be clear that you are weak and we are strong. You are now our slave, unless you are unable to be a slave, in which case you are dead. We are sorry for your loss. This is a most excellent planet. Lovely blue sky. Most excellent green vegetation. We are going to like it here. Thank you for not completely destroying it.”

I do what a lot of people (I find out later) who remain awake do. I run. I run toward home.

Additional Thoughts: Alien invasions are totally making a comeback. There have been a slew of movies with this theme on the roster – Skyline might not have been so successful, but Battle: Los Angeles looks pretty damn awesome.