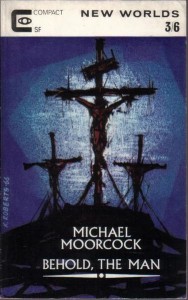 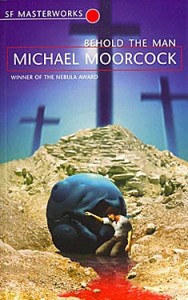 Karl Glogauer is a disaffected modern professional casting about for meaning in a series of half-hearted relationships, a dead-end job, and a personal struggle. His questions of faith surrounding his father’s run-of-the-mill Christianity and his mother’s suppressed Judaism lead him to a bizarre obsession with the idea of the messiah. After the collapse of his latest affair and his introduction to a reclusive physics professor, Karl is given the opportunity to confront his obsession and take a journey that no man has taken before, and from which he knows he cannot return. Upon arriving in Palestine, A.D. 29, Glogauer finds that Jesus Christ is not the man that history and faith would like to believe, but that there is an opportunity for someone to change the course of history by making the ultimate sacrifice.

First published in 1969, Behold the Man broke through science fiction’s genre boundaries to create a poignant reflection on faith, disillusion and self-sacrifice. This is the classic novel that established the career of perhaps contemporary science fiction’s most cerebral and innovative author.

Why did I read this book: Browsing my loval Waterstones, I saw this displayed alongside several SF and Fantasy novels. The cover and title grabbed my attention, the blurb did me in.

Warning! This review contains spoilers. HOWEVER, given as how the blurb itself spoils the most important FACT about the book, my own spoilers which are necessary for the discussion of the book, are inconsequent and do not, I believe spoil the EXPERIENCE of reading the book.You have been warned!

But I am ahead of myself. That’s what a truly awesome book will do to me.

It begins as Karl Glogauer stumbles out of a broken time machine (a womb-like sphere filled with a fluid that leaks, rendering the object useless) in 28 AD. He is rescued by followers of John the Baptist and nursed back to health amongst this group of Essenes, who believe him to be a magus who will lead them against Rome. Eventually Karl breaks away from the group in order to search for Jesus Christ as his impending crucifixion is the event he has come to witness. When he finds the man, he is shocked to see that Jesus is a blabbering, mentally incapacitated hunchback who lives with his mother Mary (who is so not like a virgin) and his “father” Joseph (a bitter old man) and his brothers and sisters. Karl then does the only thing that a self-aware time traveller can ever do: he takes upon himself to play the role of Jesus Christ, determined to pull it off till the bitter end.

But things are never ever as simple as one could hope them to be and this is where the beauty of this book lies. It has so many layers I don’t even know where to start. I can only say that peeling back, or rather observing and absorbing each one was an adventure and a privilege. There is plot, character, writing, format, themes and ideas to consider and all of them come together beautifully.

Karl is one of the most messed up characters I have ever had the pleasure to come across. Moorcock alternates the happenings in 28AD with short flashbacks to Karl’s life in the 20th century. From a problematic childhood which includes paedophilia and abuse at an early age to an adulthood overwrought by neurosis including a tendency to stage suicide attempts, masochism, repressed homosexuality, a messiah complex (of course) and a very fucked up view of religion which he associates with sexuality (a silver cross = women; wooden cross =men). We observe several of his relationships, especially one with girlfriend Monica (God, Karl, what you’ll do for attention) with whom he talks about myth, religion and psychology. Karl admires the work of Psychologist Carl G. Jung and hopes to become one, one day but this attempt at becoming something or doing anything with his life is thwarted by another aspect of his own personality , a certain avoidance of reality as it presents itself mingled with self-doubt. Karl is not really a religious character but his obsession with Jesus Christ, and his self-sacrifice is what propels Karl to become a time traveller (well, that and the need to prove Scientific minded Monica wrong).

Mind you, the time travelling per se is not really important. We never learn the specifics and the mechanics of how it is even possible but this matters none at all (which quite possibly makes it less “Science” fiction than it ought to be). However, in another stroke of genius, the author does play with the ideas that are often associated with time travel. As any self-aware time traveller will tell you, it is very important to stick with the facts and let history run its course.

And that is exactly what Karl tries to do but it opens up the possibility for a glorious MESS of Biblical (hee) proportions. The Crux (hee –sorry so many inevitable puns) of the problem here is thus: because the historical Jesus proves to be an idiot who never did what he was supposed to do, Karl takes upon himself to do what historical events he knows to have happened. But did they really happen? By making the events effectively real – he picks up the 12 apostles, he engineers his arrest and eventual death – he might in fact have changed them all by making then factual rather than symbolic and possibly removing any and all real meaning from it all.

And from this comes another layer to be exposed, the difference between myth and religion and beliefs and fact. The absolutely fascinating discussion with his girlfriend Monica about how the myth is unimportant and that the impulse that creates it is the important thing. In this scenario, it is proved by what he has come to witness: Jesus, the historical figure is not the important thing, but how the creation of this myth (because if he never did what he did, then he is most definitely a myth) is fuelled by people’s need to believe in the idea of compassion, of love and forgiveness. Because then the myth of Jesus is less than an individual and more of a collective NEED perhaps stemming from archetypes (which links beautifully with Jung, by the way). It points to the idea that Jesus as a man, doesn’t need to have existed at all, as long as the ideal of Jesus can live on.

I find this absolutely beautiful. I have no doubt that to some this idea is completely blasphemous but to me (mind you, I am not religious at all, that needs to be taken into account) organised religion and deep seated belief do not necessarily go together (although they are also not mutually exclusive, obviously).

One of the most striking aspects of the book though is how everything is open to interpretation: none of the things I have said so far are exactly final. Karl might or might not have fulfilled a needed historical event or he might or might not have changed things. I also think that what I see as repressed homosexually and connection between religion and sexuality (as he is dying in the cross – a wooden cross mind you – he gets an erection) could probably be the result of trauma as he was sexually abused by men who were connected to the church. Hey, I would even say that Karl is so messed up that maybe, the entire story happens only inside his head. I don’t care, what is important here is the fact that with this short novella Moorcock opened up a dialogue between fiction and me, which made me think, consider, theorise, relate, sympathise and mourn.

I have considered and re-considered and found myself unable to find anything remotely resembling a problem or a fault with this novella. Although I am sure they exist because no book can ever be perfect because we are all after all, only humans (behold, the man) subjectively speaking, to ME, the reading experience this book provided, is as perfect as it gets.

Notable Quotes/ Parts: At one point, Karl finds himself lost in the desert and has to fight his demons (or Monica, inside his head). Which you know, is exactly what the historical Jesus was meant to have done – so…playing events? Creating them? or living them? Does it matter?

Behold the Man is part of the SciFi and Fantasy Masterworks collection that Gollancz has been publishing throughout the years. And now a group of intrepid, awesome bloggers took upon themselves to read and review them all.They even created a blog: Science Fiction & Fantasy Masterworks Reading Project has gone live recently – go and check it out.

Also, one of my favourite bloggers, Paul Charles Smith of the excellent Empty Your Heart of Its Mortal Dream is organising a month long event (date to be confirmed) dedicated to Michael Moorcock with contributions s from Jeff VanderMeer,China Mieville, amongst others and Moorcock himself. I can’t wait and will make sure to mention it again once I know more.

Verdict: Brilliant and thought-provoking, Behold the Man deserves many acolytes, and a place in my keeper shelf.

Reading Next: City of Ruin by Mark Charan Newton