A profound, feminist dystopian novel about friendship, sisterhood and courage, Maresi by Maria Turtschaninoff is exquisite. 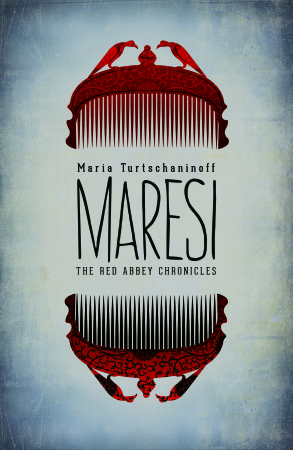 Maresi came to the Red Abbey when she was thirteen, in the Hunger Winter. Before then, she had only heard rumours of its existence in secret folk tales. In a world where girls aren’t allowed to learn or do as they please, an island inhabited solely by women sounded like a fantasy. But now Maresi is here, and she knows it is real. She is safe.

Then one day Jai tangled fair hair, clothes stiff with dirt, scars on her back arrives on a ship. She has fled to the island to escape terrible danger and unimaginable cruelty. And the men who hurt her will stop at nothing to find her.

Now the women and girls of the Red Abbey must use all their powers and ancient knowledge to combat the forces that wish to destroy them. And Maresi, haunted by her own nightmares, must confront her very deepest, darkest fears.

A story of friendship and survival, magic and wonder, beauty and terror, Maresi will grip you and hold you spellbound.

Stand alone or series: Book 1 in the Red Abbey Chronicles

I am telling the story to make sure the Abbey never forgets. But also so that I can fully grasp what happened. Reading has always helped me to understand the world better. I hope the same applies to writing.

There is an island, in the middle of the ocean, far from the ways and works of men. On this island, there is an abbey–a red abbey–that follows the sacred teachings of the First Mother. Only women are allowed to set foot on the island; all women who make their way to its shores are welcomed, sheltered, and made to feel at home.

Maresi is one of the Red Abbey’s novices. A young woman from the mountainous country of Rovas, Maresi has known life within the Abbey’s embrace for the past few years, ever since her family sent her away following a cruel winter that claimed the lives of many–including Maresi’s younger sister. At the Abbey, Maresi is happy, though she misses her father and mother. Over the years, she learns the Abbey’s secrets–the treasure trove room of knowledge contained in ancient books, the awe-filled magic of the crypt that hides the remains of the Abbey’s first seven sisters, the breathtaking beauty of the island at dusk and at dawn.

Most of all, Maresi is a friend and sister to all of her fellow novices–she cares for the younger girls, tells them stories, and watches over them as they make their way from childhood to become full sisters of the order.

When a new girl, Jai, comes to the island, Maresi is there to help the timid novice. Patient and sympathetic, Maresi knows that the quiet, skittish Jai guards a dark and secret past. She is determined, though, to help Jai find her voice. “She does not know how to feel safe… we will have to teach her how.” But Jai’s story is one of sadness, of grief, and revenge. And soon, everything on the island will change, when the men who caused Jai to leave her homeland come sailing to the Red Abbey.

Translated for the first time into English from the native Swedish, Maresi is a haunting, beautiful dystopian novel, and an inspired breath of fresh air in comparison to many of the YA dystopias that I’ve read of late. There is no young man who comes sailing to this Red Abbey, no dreamy forbidden romance that blossoms between the eponymous heroine and a conveniently gorgeous teenage boy. There is no bloated, artificially inflated melodrama; no huge wars or epic battles to be fought in an arena, no fancy serums or MacGuffins to detract from the story.

No, Maresi does not bother with these devices or tricks. Lushly written in lyrical, sparse prose–thanks in large part to Annie Prime’s careful translation, no doubt–Maresi is a tale that is familiar, yet utterly self-assured and unique. This is a powerful feminist fable, about a refuge for women that offers power, safety, knowledge, and magic, far apart from the larger world where women have little power of their own. It’s a tale of sisterhood, kindness, and courage–the courage to fight one’s destiny, to embrace one’s powers and abilities (especially Maresi, as she learns what her true calling is), and to face fear and danger head-on in order to protect the people one loves. In many ways, the imagery of this story is familiar and traditional–the magic of the Abbey is represented in the classic maiden, mother, crone way–but Turtschaninoff’s take on this classic neopaganistic trinity is imbued with its own sense of wonder and fantasy. The power of the Red Abbey, of the Mother who watches over the island and guards its secrets, is wondrous, indeed. And each novice’s true calling is equally wondrous, if also daunting–especially Maresi’s calling.

In many ways, Maresi reminds me of the writing of Margo Lanagan, but less cruel (and no less impactful); it also reminds me of the stark, strange beauty of Marcus Sedgwick’s Midwinterblood. This tale contains so many moments of beauty and poignancy, so many beautiful images: The dying of threads one by one with the ink emitted from snails (the blood red from which the Abbey gets its name and earns its fortune). The petals, combs, and braids that contain the magic of wind and storms. The tales of great, giant moon-women who protect the Abbey from the men who would dare besiege it. There is something to be said about the message that Maresi tries to send, and its reasons for examining a world where many women are raped and abused–there are certainly scenes in this novel towards its end that are hard to read. Turtschaninoff handles these issues and grim realities with care and compassion, though; she does not use these scenes for shock value or without careful purpose. The message of the overall book is one of hope, of understanding, and of establishing a safe, protected place for those who otherwise have nowhere to turn.

And as for Maresi, the titled main character, herself? She is a wonder. Eager to learn, ravenous for knowledge, brave and honest, Maresi is the kind of heroine that will resonate with readers of all ages and genders. She is the teller of this tale, the keeper of knowledge–and she’s both brave and self-aware enough to understand what she needs to do.

I loved her, and I loved this book so very dearly. I’m very excited for the next two novels in the Red Abbey chronicles–and I urge you to give Maresi and her words a read.

Ed. Note: A previous version of this review stated the book was originally written in Finnish, and has since been corrected.