Thought-provoking. Existential. Poignant. These are all words that describe Claire North’s luminescent Touch. 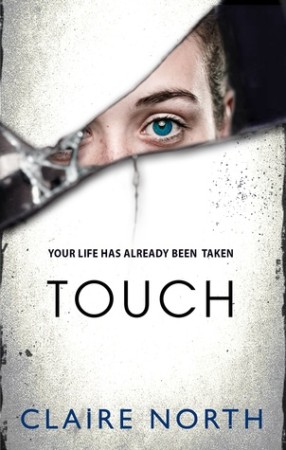 Kepler had never meant to die this way — viciously beaten to death by a stinking vagrant in a dark back alley. But when reaching out to the murderer for salvation in those last dying moments, a sudden switch takes place.

Now Kepler is looking out through the eyes of the killer himself, staring down at a broken and ruined body lying in the dirt of the alley.

Instead of dying, Kepler has gained the ability to roam from one body to another, to jump into another person’s skin and see through their eyes, live their life – be it for a few minutes, a few months or a lifetime.

Kepler means these host bodies no harm — and even comes to cherish them intimately like lovers. But when one host, Josephine Cebula, is brutally assassinated, Kepler embarks on a mission to seek the truth — and avenge Josephine’s death.

Why did I read this book: I’ve heard nothing but praise for Claire North – well, Ana’s slightly underwhelmed review of The First Fifteen Lives of Harry August aside – and the premise for Touch intrigued me instantly. (Not to mention the fact that I’ve had this ARC on my shelf since comic con of last year, so it was time to dust it off and give it a whirl!)

There are many ways to catch a ghost sitting in the body of a loved one. Basic questions – name, age, father’s name, mother’s name, university – can be answered by any well-informed inhabitant, but it takes a matter of minutes to probe a little deeper.

Kepler is a ghost. Kepler is a thief. And Kepler has worn many, many lives.

Once, Kepler had a name and a body – but at the point of violent death so many centuries ago on the streets of London, Kepler is one of the few souls that takes solace in the names and bodies of others. Like other so-called ghosts, one touch of the flesh, and Kepler assumes a host’s identity – their bodies, their time, their lives.

And Kepler has stolen many, many lives.

Over the years, Kepler has been a medical student and a prominent politician; a prostitute and a model. Kepler has been young, beautiful, elderly, male, female, healthy, and diseased. Kepler has taken bodies by force and with the willing consent of its host – in Kepler’s latest incarnation, the host is a willing young woman named Josephine, with a hard past. But on the crowded platform of a train station, Josephine is shot twice in the chest, once in the leg, with bullets meant to kill the ghost. An assassin is hunting Kepler and Kepler’s kind – an organization bent on eradicating ghosts, with detailed dossiers on the lives Kepler has assumed… and the supposed murders that Kepler has committed.

On the run, desperate for answers, for justice for Josephine, for the right to live, Kepler tracks down its hunters – and finds that nothing is what it seems.

“I walk through people’s lives and I steal what I find. Their bodies, their time, their money, their friends, their lovers, their wives—I’ll take it all, if I want to.

Thought-provoking. Existential. Poignant. These are all words that describe Claire North’s luminescent Touch. This is the second novel from North (a pseudonym for author Catherine Webb, who also writes urban fantasy under the name Kate Griffin), following her incredibly well-received and much-loved 2014 book The First Fifteen Lives of Harry August. Like Harry August, Touch‘s Kepler is an immortal, unique protagonist – and it is largely because of Touch‘s protagonist that the novel truly works.

I was drawn to Touch because of the novel’s premise – the idea of an untethered soul, jumping and stealing the consciousness of any body is fascinating and comes loaded with important, complex questions of free will, identity, and the fundamental essence of self. It’s not a new conceit or a particularly unique one – from vampires, to demonic possession, to body-snatching aliens, North employs familiar horror tropes here.[1. a list of other titles that employ these various tropes is available over on our column at Kirkus.] But Touch stands out because of its careful, beautiful prose, and its cautious, monstrous, yet wholly sympathetic protagonist.

Let’s talk about Kepler.[2. I’m trying to avoid using gendered pronouns, because Kepler is simply Kepler – I think of Kepler as a woman, though the ghost has lived and jumped through so many lives, assigning a gender is wrong, and not the point. But, as always, your mileage may vary.] A ghost who can hijack a host body in an instant, Kepler is unequivocally, unapologetically, a monster. In order to live, Kepler must assume a body; Kepler makes no excuses for choosing to live. The sympathy in Kepler’s character, however, is that we see this ghost has a kind of code. Through North’s skillful prose and alternating present-past life flashbacks, we learn that Kepler is not the mass murderer or serial killer that the Aquarius Group believes it to be. We read of a ghost who is cautious, measured, and calculating; one who, when the situation is right, even attempts to make the lives of its hosts better (however misguided and immoral that decision may be). For Josephine Cebula, this is enduring the withdrawals from intravenous drugs and offering her a chance at wealth and a fresh start; for Maria Anna Celeste Jones, a different woman from a different time, it is offering a chance of revenge for the rapes and abuses wrought by a corrupt and powerful politician. Make no mistake, Kepler is no saint and every transaction comes at a cost – but beyond basic, even the “good” deeds the ghost plants are rife with questionable morality. When one is a body thief, stealing the time, the identities, the very lives of its hosts, it’s hard to moralize or support the rationalizations of the thief. When one such as Kepler takes on the role of “estate agent” and does the dirty work for other ghosts, so that they can easily slide into the bodies, lives of their dream hosts, it’s even harder to sympathize with such a character.

Somehow, however, North pulls it off.

Perhaps this is because we, as readers, are exposed to other ghosts in the course of Touch. We read Kepler’s horror and pain at losing Josephine, Kepler’s outrage at the injustice of that unnecessary death. In contrast, we are introduced to other ghosts: Janus, who seemingly flits from pretty, rich, privileged body to body. Aurangzeb, the childish, whining ghost who yearns for fame and glory. Galileo, the true murderer, driven mad over the millennia. North’s ghosts are fickle, capricious, god-like creatures who play with the lives of mortals not just because they can, but because they have no other choice. It is the way the ghost interacts with its mortal audience that makes all the difference. This is Kepler’s story, and Kepler’s strength.

We fall in love too easily, ghosts such as I.

There is little not to love in Touch. The writing is beautiful, the questions it raises about mortality and morality are striking. Although the book’s ending tends towards overly-sentimental, there is no doubt in my mind that Touch is one of the best books I’ve read all year. It’s a contender for a top 10 book of 2015, and I’ll be rushing out to get my copy of The First Fifteen Lives of Harry August immediately.

Absolutely recommended, for the monster in all of us.

Notable Quotes/Parts: You can read an excerpt by using the frame below:

And check out the book trailer below:

Rating: 8 – Excellent, and on my longlist for Notable Reads of 2015

*ARC* Book Review: Before the Scandal