An unexpected, soul-searching tale of a doctor who discovers his moral compass, but inadvertently creates a monster. 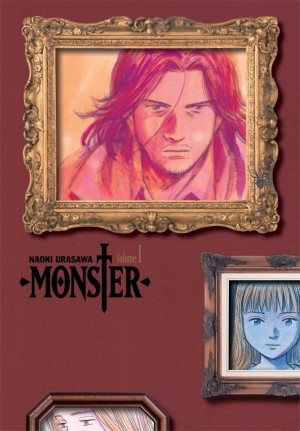 Johan is a cold and calculating killer with a mysterious past, and brilliant Dr. Kenzo Tenma is the only one who can stop him! Conspiracy and serial murder open the door to a compelling, intricately woven plot in this masterwork of suspense.

Everyone faces uncertainty at some point in their lives. Even a brilliant surgeon like Kenzo Tenma is no exception. But there’s no way he could have known that his decision to stop chasing professional success and instead concentrate on his oath to save peoples’ lives would result in the birth of an abomination. The questions of good and evil now take on a terrifyingly real dimension. Years later, in Germany during the tumultuous post-reunification period, middle-aged childless couples are being killed one after another. The serial killer’s identity is known. The reasons why he kills are not. Dr. Tenma sets out on a journey to find the killer’s twin sister, who may hold some clues to solving the enigma of the “Monster.”

A brilliant neurosurgeon from Japan, Kenzo Tenma is a young doctor with a bright future. Singled out by the ambitious and high-powered hospital director, Udo Heinemann, Tenma as rapidly ascended through the ranks at Eisler Memorial. Engaged to the director’s beautiful daughter, Eva Heinemann, and lauded for his unparalleled surgical skill, Tenma is the golden child of 1980s German medicine.

But all of that changes when Tenma finally is confronted with what it means to be the favorite of Director Heinemann and a rising star of the hospital–and the human cost involved. He starts to feel pangs of regret, guilt and anger when he’s confronted by the wife of a man who died in surgery–a man who Dr. Tenma was supposed to operate on before he was whisked away to instead operate on a much more important and influential patient. Grappling with his conscience, Tenma turns to his fiancee and the Director for vindication, only to discover that neither of them care in the slightest for healing people–only for getting ahead. 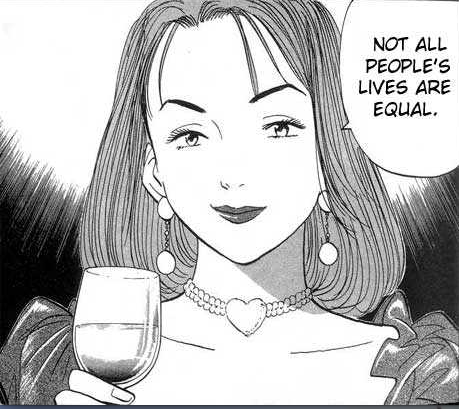 And with that revelation, with the flashbacks of everything Tenma has willingly gone along with to please the director, he decides: NO MORE. When Tenma is once again called off a tricky surgery (a young boy with a bullet in his brain, the third victim of a break-in that claimed both of his parents’ lives) and instead sent to work on a high ranking government official at the behest of the Director, he makes a choice that will change the course of his life forever. Tenma, knowing that he alone has the skill that could save the young boy from death, stays with the child and refuses to do surgery on the government man.

Though this decision costs him everything–his fiancee, his high standing at the hospital, his fast track to riches and fame–for the first time in a long time, Kenzo Tenma is happy. He upholds his oath as a doctor, is focused on saving people’s lives, and has meaning in his life. All of this, because of a young boy–and his silent, horrified twin sister–who forced him to make a choice. 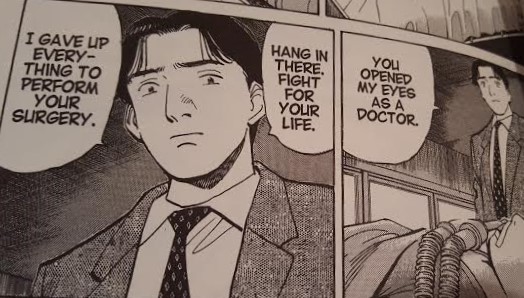 After an initial hard period, Tenma’s life only gets better–the Director and two of his lackeys are found dead, victims of poisoned candy from an unknown sender. The boy that he operated upon, Johan, regains consciousness and appears to be better–but then disappears without a trace from the hospital. And while Tenma is shocked and saddened by the loss, he is soon promoted to Director himself and able to operate on patients and save lives with impunity, building Düsseldorf’s Eisler Memorial into a renowned and respected hospital.

Fast-forward nine years. Kenzo Tenma’s newest patient is a pick-lock criminal, suspected of having ties to many unsolved murders over the years–including the murder of the Liebert couple, parents of the missing Johan and sister Anna. Tenma operates on the alleged thief and saves him from death–only to learn that the truth is far more sinister than he ever could have imagined. This man, Adolf Junkers, has been hired by what he calls “a Monster”–the real murderer–and fears that his own execution will happen at any moment. Tenma, ever-eager to save his patient, tries to console Junkers, and follows him after he makes a break from the hospital.

What Tenma discovers, however, will change everything once again. Junkers was telling the truth–he was hired by a monster. A monster, who regards Dr. Tenma as more important than a father-figure, for saving his life so many years ago. A monster who cares for nothing but his own amusement in the face of others’ horror. A monster, who used to be a twelve year old boy named Johan Liebert–though that never was his name.

Kenzo Tenma realizes that everything in his life is lie; his one defining act of heroism and change saved this monster from certain death and loosed him upon the world. And every good thing in Tenma’s life since that night–the death of the former Director and anyone in his way–was orchestrated by this Monster.

Now, Kenzo Tenma is on a mission. He will do everything in his power to find the young man he once saved, and stop him once and for all.

Monster by Naoki Urasawa is… unexpected. I knew the premise of the story at a very high level before diving into this omnibus edition (collecting the formerly released volumes 1 and 2, or chapters 1-16 of the overall manga), and was expecting high levels of blood, violence, and mayhem. Monster is not that kind of story. Rather, Monster is restrained with its violence, relying more heavily on building tension and character arcs over the period of several years. And I loved every frame of this book.

At its heart, Monster is a story about choices and consequences, viewed initially through the lens of Doctor Kenzo Tenma, but then branching out to other characters–a newspaper editor, a young girl attending college, a jilted former lover, an ex-soldier and his adopted charge, a murderer. Tenma is the unifying thread through all of these stories, the commonality at which each individual character intersects. As our protagonist, Tenma is kind of a pushover when we first meet him–he’s young, naive, and very gifted as a doctor. He lets his fiance say horrible things, and allows her father to usurp his work in order to make the Hospital seem better–it’s hard to really like this doctor early on. But then Tenma starts to understand the consequences of his passivity and he makes a conscious choice to save lives and devote himself to the patients brought into his hospital–regardless of their social standing or importance. This is all very admirable, of course; the kicker here is that every choice has consequence, and those consequences cannot always be predicted. In Tenma’s case, his soul-searching decision to Do No Harm sends him down a very dark path. I like the nihilism in Monster very much, and appreciate the lengths to which Tenma will go to ensure that his mistake does not go unfixed. (The implied philosophical question is interesting, too: if you knew that your patient would turn into a serial killer, would you allow him to die? I don’t even think Tenma understands where he falls on the spectrum of response at this point in the story.) (Also, if anyone else has read the book, doesn’t Tenma seem full-on Keanu by the end of this first volume?) 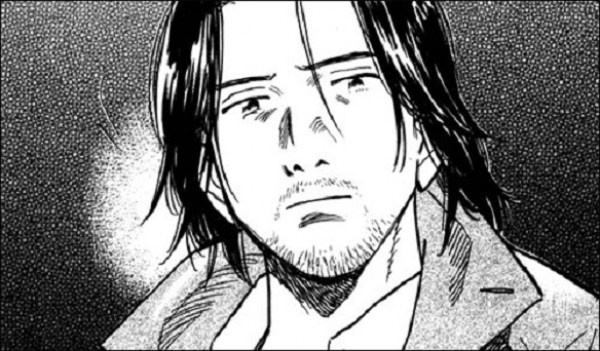 I don’t want to spoil too many of the story particulars or the other characters because those are discoveries best made alone; but I will say that the sibling story that unfolds, the telling of the relationship between young Anna and Johan, is pretty neat. I cannot wait to see what happens with these two twins over the course of the series–I expect a showdown of epic proportions (especially since Anna seems to be able to handle herself without help).

The last thing I’ll say about Monster is that it is a beautiful book, from an art and packaging perspective. I love the interconnected collage feel for the covers of each of the nine omnibus editions, almost as much as I love the art within and the seamless way Urasawa’s art feels true to era in both the 1980s timeframe and the later 1990s setting–conveying action, style, emotion, and character without ever feeling ham-handed.

To put it plainly: I loved Monster, and I cannot believe it took me this long to read. I’ll be back for more, very soon.