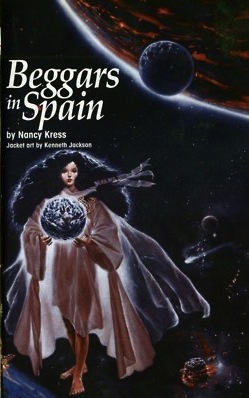 PLEASE NOTE: This is the original novella which won the Hugo and Nebula awards. Leisha Camden is a genetically engineered ‘Sleepless.’ Her ability to stay awake all the time has not only made her more productive, but the genetic modifications have also given the ‘Sleepless’ a higher IQ and may even make them immortal. Are they the future of humanity? Or will the small community of ‘sleepless’ be hunted down as freaks by a world that has grown wary of its newest creation?

Stand alone or series: The first part of the Sleepless Series (collected in the full-length novel of the same name in 1993).

Why did I read this book: I’ve read a few works by Nancy Kress in the past year, and have been wholly taken in by her writing. When this novella didn’t win an Old School Wendesday Readalong poll a few months back, I was heartbroken – but not for long, because I greedily decided to read this heralded SFF novella for myself.

Roger Camden is a self-made man and a business mogul who has amassed a formidable fortune through power of will and ceaseless work. For all of Camden’s successes, however, his greatest hope lies with his true legacy – a child. Camden and his reluctant wife approach the finest reproductive scientists that money can buy to conceive their biological daughter – a girl genetically engineered to be free of disease, predisposed to intelligence and beauty… and who will never require sleep. All the tests and insemination go smoothly, with just one hitch – by fluke accident, Elizabeth Camden is implanted not only with her genetically modified daughter’s embryo, but also naturally conceives a second child, simultaneously. The two girls grow in Mrs. Camden’s womb, fraternal twin sisters – one sleepless and genetically engineered to achieve great things, the other completely healthy and ordinary.

As one might expect, the Camden daughters grow into two very different young women. Leisha Camden becomes every bit as brilliant as her father hoped, a rising academic star with a hungry, inquisitive mind that never requires a moment of sleep. Conversely, Amy Camden is ignored by her father and deeply resentful of her perfect sister, and lashes out rebelliously against the Camden name – as a teenager, she becomes pregnant and severs all ties with her family.

As the years pass, Leisha learns of others like her – fellow Sleepless, almost uniformly brilliant, precocious children and young adults. But as their nature becomes more known to the world, the rift between the Sleepers (regular humans) and the Sleepless grows. The Sleepers are resentful of the Sleepless – a resentment that grows and is expressed in public acts of humiliation, discrimination, and violence.

The question to Leisha and her fellow Sleepless becomes more than just a philosophical exercise – should they withdraw into a separate society? Or do they work with the Sleepers, the metaphorical beggars in Spain, to make a better world?

The original Hugo and Nebula Award winning novella, Beggars in Spain has been heralded as one of the finest SFF novellas written in the 20th century – and I’m inclined to agree. This is an incredibly thought-provoking work, and one that is as relevant today as it was in 1991. At its core, this is actually a deeply theoretical story, one that weighs the concept of a society, of social contracts, and what is required of its members. In Beggars in Spain, much ado is made of a future school of economic social thought called Yagaiism (founded by scientist Kenzo Yagai, who pioneered a revolutionary form of power) – Yagaiism, being a worldview that is essentially Objectivism. In Yagaiism, an individual is entitled to individual rights, and dignity or moral value is achieved only through that individual’s personal efforts. Of course, the flipside of this philosophy is the understanding that those individuals who have no dignity or make no personal effort – who can offer no products or services – are not owed anything by their society.

Beggars in Spain hyperbolizes this philosophical argument through science fiction – do the Sleepless, who have so much to contribute to society, owe anything to the freeloading Sleepers? Explored through the eyes of protagonist Leisha, a character who has grown up adhering strictly to Yagaiism and following her father’s teachings and wishes, we see her trust in the framework of Yagaii’s idealistic social contract splinter under the weight of reality. In addition to the discriminatory hate and fear-mongering of a group of Sleepers, we also are witness to Leisha’s compassion, to the kindness of other Sleepers and Sleepless who act in concert – not in acts of purely linear trade, but in a diverse and ever changing ecology. Personally, I found the questions raised in Beggars in Spain thought-provoking and challenging, although one’s mileage may vary depending on one’s own personal worldviews and beliefs.

Beyond the theoretical, Beggars in Spain is also a true work of science fiction. The very concept of sleeplessness is fascinating – would NOT sleeping make you so much better, so much more? Wouldn’t you still be emotionally or intellectually fatigued, even if your body was engineered such that it would never require sleep? Or would you never even know the difference, if you’d grown up without sleep for your entire life? (There’s a particular scene in which Leisha – as a very young child – talks about light, which is fantastic.) The scientific explanations in this book might strain at credulity, but the brilliance of the premise is unshakable. Seriously, how many times have you every thought to yourself, if only I had more hours in the day, if only I weren’t so tired – think of the things one could accomplish.

In addition to being a theory-heavy book and a science fiction title, Beggars in Spain also happens to be a deeply character-driven novel, written almost entirely from Leisha’s unreliable perspective. Brilliant and highly motivated, Leisha is also incredibly naïve and idealistic – she’s been taught to follow a certain philosophy as a child, and gradually, oh so gradually, learns that there is more to the world and to people who do not fit in this cut and dry formula of social dignity. Suffice it to say, I loved Leisha’s narration. Another high point in the book is the troubled relationships between Leisha and her father, and especially between Leisha and her sister, her fraternal twin, Amy. There are so many characters that undergo so many changes in this novella – the scientist, Susan, who abandons and rediscovers her work; the other Sleepless children, who are hopeful and spiteful and as varied in opinion as any other people; and so much more.

In short, I loved Beggars in Spain deeply, and I wholeheartedly recommend it. I will be back to read the sequels (or, rather, the full length novel) very, very soon.

They sat stiffly on his antique Eames chairs, two people who didn’t want to be here, or one person who didnt’ want to and one who resented the other’s reluctance. Dr. Ong had seen this before. Within two minutes he was sure: the woman was the silently furious resister. She would lose. The man would pay for it later, in little ways, for a long time.

“I presume you’ve performed the necessary credit checks already,” Roger Camden said pleasantly, “so let’s get right on to details, shall we, Doctor?”

“Certainly,” Ong said. “Why don’t we start by your telling me all the genetic modifications you’re interested in for the baby.”

The woman shifted suddenly on her chair. She was in her late twenties – clearly a second wife – but already had a faded look, as if keeping up with Roger Camden was wearing her out. Ong could easily believe that. Mrs. Camden’s hair was brown, her eyes were brown, her skin had a brown tinge that might have been pretty if her cheeks had any color. She wore a brown coat, neither fashionable nor cheap, and shoes that looked vaguely orthopedic. Ong glanced at his records for her name: Elizabeth. He would bet people forgot it often.

You can read a full excerpt online HERE.

Reading Next: The Westing Game by Ellen Raskin