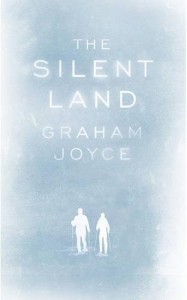 Genre: It seems to be categorised Literary Fantasy, whatever that means.

A young couple are caught in an avalanche during a ski-ing holiday in the French Alps. They struggle back to the village and find it deserted. As the days go by they wait for rescue, then try to leave. But each time they find themselves back in the village. And, increasingly, they are plagued by visions and dreams and the realization that perhaps no-one could have survived the avalanche.

THE SILENT LAND is a brooding and tender look at love and whether it can survive the greatest challenge we will ever face.

Why did I read this book: When I received a copy from the publisher and read the blurb, I thought it sounded like a good Halloween read.

How did I get this book: I received an ARC from the publisher

This review is going to be short and sweet – to speak more of the book would be to spoil it and effectively ruin it.

It’s Jake and Zoe’s tenth anniversary and they are back to the ski resort where they first met, to celebrate. On their second morning at Saint-Bernard-en-Haut, they wake up early to beat the crowds, enjoy the silence and the unperturbed snow. They are on their joyous way down the slope when the unthinkable happens and they are hit hard by an avalanche. Zoe is trapped upside down but luckily manages to wiggle her out just enough so that Jake can find her. He digs her out and mostly unscathed, they go back to the resort. On the way, they see no one; the hotel is empty and thinking that everybody evacuated because of the avalanche, they settle down for the evening, grateful to be alive, happy to be together.

They wake up the next morning and are still met with silence and emptiness. In the ensuing days, the couple tries to leave Saint-Bernard-en-Haut or communicate with the outside world but are encumbered at every try. They try to drive but can never go pass a certain part of the road, they try to walk over the mountains only to return to the departure place. They soon start to notice other unsettling things and begin to think that maybe, just maybe they were not that lucky after all. But then, what exactly happened? Where are they? And are they really alone?

I love books that take me completely by surprise: The Silent Land is definitely one of them. I was expecting a good ghost story – since that’s what the blurb sort of indicates – and even read it for Halloween. But as ghostly as it is, and with some definite unsettling scary moments, The Silent Land is much more than that. It is in fact, a character piece and a very romantic one too. It is in the amazing relationship between the characters that the allure and strength of the story lies. As I mentioned before, there are a few scary and unsettling moments and a sense of foreboding and urgency that permeates the story but their relationship, its ups and downs, how each character reacts and behaves accordingly to what is happening to them is what it’s all about. And it is amazing that it is very possibly to get to know them both so well since the story is mostly, if not entirely, from Zoe’s point of view. Her strong voice carries the book and moves the story forward. And that movement forward in their relationship – because there is movement there as they display traits (like Jake’s ability to display confidence where there is none) and then interact around them and talk about them – is in stark contrast to the frozen (in more ways than one) reality around them.

Perhaps The Silent Land is not one of the most original stories I have ever read in terms of its premise. But between the pacing of the story which was a strange yet effective mixture of growing tension and quiet routine and the great characterisation with its extremely realistic, up-to-date dialogue and interaction between two flawed yet likeable characters, it is certainly a great read, and a rewarding one at that: to the point that when the story reaches its inevitable yet still twisterific ending, I sobbed like I haven’t sobbed over a book for a long, long time.

Notable Quotes/Parts: One example of what I thought was a great interaction between Zoe and Jake which happens after she tells him something:

“Well, don’t expect me to feel better. You’ve taken the thorn out of your skin and stuck it in mine. And it hurts.”

“Don’t cry. It doesn’t matter. If there is any sense to marriage at all it’s so that I take your thorns, and you sometimes take mine.”

They lay together in the dark of the room. There was enough light reflecting off the snow from the lamps outside by which to see. Nothing more was said.”