Book Review: By These Ten Bones by Clare B. Dunkle

Title: By These Ten Bones 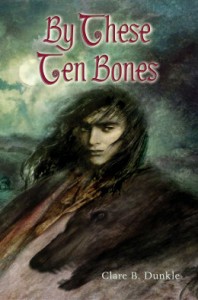 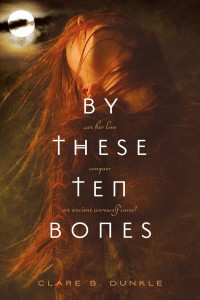 A mysterious young man has come to a small Highland town. His talent for wood carving soon wins him work at the castle and the admiration of the weaver’s daughter Maddie. Fascinated by the silent carver, she sets out to gain his trust, only to find herself drawn into a terrifying secret that threatens everything she loves.

There is an evil presence in the woodcarver’s life that cannot be controlled, and Maddie watches her town fall under a shadow. One by one, people begin to die. Caught in the middle, Maddie must decide what matters most to her—and what price she is willing to pay to keep it.

Why did I read the book: I recently read another book by this author and LOVED it: The Hollow Kingdom, reviewed HERE.

By These Ten Bones was first published in 2005 and is now being reissued with a brand new cover. [1. As much as I like the new cover, I actually prefer the older one. What do you think?] It is branded as Fantasy-Horror and as a folklore-based new take on werewolves but really and truly, this is a paranormal romance for young adults and as such, it is far superior to a lot of what I have read in the genre in the past years, both in terms of setting and writing but also when it comes to the romance itself. I decided to read it after I LOVED with an all-consuming passion another book by the author, The Hollow Kingdom and after that I went and bought her entire backlist.

By These Ten Bones is set in a small community somewhere in the Highlands of Medieval Scotland. 15 year old Maddie is the daughter of the weaver and their family have a good standing in the community. Their lives are simple: working on their craft, helping the community when needed at the time of harvest. Maddie leads a contented life, ready to settle down when the time comes when she can find a husband (hard as it will be, since their community is so small). Then one day travellers visit their village with their fare to be sold and/or traded for and amongst them a young and extremely talented carver who works with an older man. At first, the young man appears to be mute but he breaks his silence to speak to Maddie. But bothered by the laziness and drunkenness of the older man, the village’s leader imprisons him and the duo is unable to leave when they were supposed to.

When the night of the new moon comes, a terrifying shadow comes to Maddie’s door and frightens the entire village with its howl. In the morning, the young carver is found, his shredded body bleeding, hid mind blanketed by fever. He is taken in by Maddie’s mother and tended back to health by their family and in the process Maddie falls in love with him. When she discovers his secret curse and is enlisted by the old man to take care of the boy when the next new moon comes, she takes upon herself to do so and to save him – whatever it takes.

By These Ten Bones is an atmospheric tale with a darkish tone and evocative setting. The author sets out to write a new take on werewolf lore and she manages it quite well by incorporating elements of Scottish folklore, as well as tapping on aspects of the medieval mind: with catholic beliefs but still rooted in local pagan legends. The daily life in the small community comes across as well-researched and believable especially when it comes to the fraught bonds and dynamic between the villagers with the underlying tension when it came to their different status in life.

There are some great terrifying moments in the novel and interestingly enough, most of them come when the villagers are overcome with fear – their actions much worse than any werewolf attack. With regards to the werewolf lore, perhaps the outcome is a bit too vague but at that point I did not mind too much, having being charmed once again by the writer’s prose.

With regards to the romance: I loved how Maddie fell indeed in love at first sight. Now, this might sound like I am being completely illogical since I usually abhor insta-love and insta-attraction but in this case it made sense: we are talking about a young girl, with no real prospects of marriage because of a lack of young marriageable men around, who then meets a nice, young, green-eyed boy who treats her well. How would she not fall for him? And she totally owns that. And I appreciated the fact that she realises this and also has to analyse her feelings when push comes to shove: is her love truly love if it was born too soon? Does she really love Paul? If she had to choose between him and her family and community, what would she do? Yes, in the end she is willing to sacrifice everything to save him AND the community at the same time – but so is he and in that sense it felt that they were on equal footing in that aspect. It also needs to be said: the willingness to sacrifice, I felt, came from choice, from thinking about her decision and it showed a lot of backbone. And I liked that, even though I prefer my love stories to come without any extra!sacrificing! [2. SPOILER about how it ends: all ends well, in case you were wondering]

I do feel By These Ten Bones is a bit on the shorter side and the story could have explored certain facets more (like the role the village’s leader played and the outcome of a couple of storylines that were left open) but overall I truly enjoyed this tale (albeit way less than I enjoyed The Hollow Kingdom) and Clare B. Dunkle is now firmly on my auto-buy list.

“Your shadow,” Maddie stammered, pointing to the ground behind him. “It moved. Moved by itself. I saw it.”

The carver turned to look, and she looked, too. His shadow was exactly like hers, thin and gray in the overcast evening. Maddie blushed hotly, waiting for him to laugh at her.

But the young man didn’t laugh. He just watched his shadow for a minute. When he straightened up and faced her again, his green eyes were wary.

“Are you going to tell the others?” he wanted to know.

Additional Thoughts: The author’s pages about the book on her website are full of interesting goodies about her research including pictures that inspired her.

Reading next: Vintage – A Ghost Story by Steve Berman