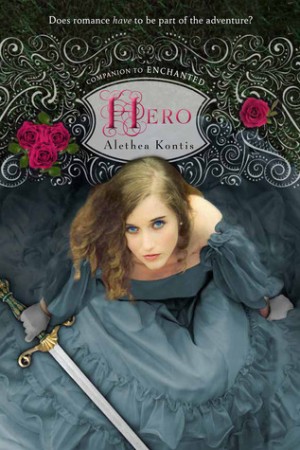 Rough and tumble Saturday Woodcutter thinks she’s the only one of her sisters without any magic—until the day she accidentally conjures an ocean in the backyard. With her sword in tow, Saturday sets sail on a pirate ship, only to find herself kidnapped and whisked off to the top of the world. Is Saturday powerful enough to kill the mountain witch who holds her captive and save the world from sure destruction? And, as she wonders grumpily, “Did romance have to be part of the adventure?” As in Enchanted, readers will revel in the fragments of fairy tales that embellish this action-packed story of adventure and, yes, romance.

How did I get this book: ARC from the Publisher (via BEA)

Why did I read this book: Last year, I read and loved – with a few reservations – Enchanted by Alethea Kontis. When I learned that a companion book was being released this year and that an ARC would be available at BEA, I immediately sought the book out.

The sixth daughter of the Woodcutter clan, Saturday comes from a family blessed with different magical enchantments. Her youngest sister, Sunday, is bonny and blithe and good and gay; her eldest sister, Monday, is so beautiful her smile rivals the sun. Even Saturday’s Mother possesses a gift of great and terrible power – her words always come true, compelling anyone who hears them to obey and make her will truth.

Unlike her sisters and brothers, however, Saturday was born with no fey gifts. Instead, she was gifted with a magical axe, which turns into a magical sword – in short, Saturday has a magical Destiny (which her sisters and brothers do not). When Saturday accidentally breaks an enchanted mirror and ends up summoning an ocean outside the family cottage – sweeping her younger brother out to sea – Saturday’s mysterious destiny finally seems to be kicking in. On the journey to find her younger brother, Saturday joins her Pirate Queen older sister, is kidnapped by an impossibly large bird, and finds herself trapped in an icy cavern at the top of the world. Here, she meets an enchanted young Lord, masquerading as a young lady, and a witch whose dragon-stolen magic keeps a mountain from collapsing. It is up to Saturday to break the witch’s enchantments, saving the people she loves along the way.

The companion novel to last year’s fairy tale mashup Enchanted, Hero is every bit as delightful as its predecessor – in fact, it may just be more delightful than its sister novel. In Enchanted, I loved the use of different fairytales, spun and tilted ever so slightly off their axis. The only drawback to that novel? The saccharine nature of heroine Sunday – who was a little too bonny and blithe and good and gay for my tastes. I remember reading that thinking to myself how much I’d rather read one of Sunday’s sisters’ stories – perhaps Monday, with her curse of beauty (and truly it is a curse that has only caused her heartache and insincere relationships based on superficial adoration instead of true love), or the seemingly clumsy and solidly un-magical Saturday. I was so thrilled when I learned of Hero, especially when I found out this was to be Saturday’s story – because, truly, I think I fell a little bit in love with this sister as soon as I met her, wielding her trusty axe and chopping firewood for the family in Enchanted.

In Hero, it is the characters that truly shine and make the book so memorable. Saturday Woodcutter is, at first blush, a typical, archetypal, tomboy/warrior heroine. She’s brash and strong, she’s bestowed with a magical destiny, and she has a magical sword to boot. But Saturday is so much more than a mere stock character. She’s actually clumsy and slow without her magical sword, but she’s stubborn and incredibly persistent when it comes to improving her skill without the aid of magic, and admirable in her dedication to family.

Saturday’s praises said, the true wonder of Hero in my opinion is the wonderful gender role-reversal fairy tale. Heroine Saturday, jokingly called the “giantess” by everyone, is tall, muscular, and charges headfirst into trouble and violence – in short, she possesses so-called traditional masculine traits one would see, perhaps, in a Hero prince. Saturday is swooped up by a witch’s familiar because the witch/familiar think she is her brother Jack Woodcutter – on account of her masculine appearance and attitude – and she is taken to the Witch’s ice castle at the top of the world. Here she meets Peregrine, a lord who has been cursed and tricked into taking the place of the witch’s daughter. In Saturday’s words, Peregrine is a very handsome girl, or a very pretty boy – he is an androgyne, who identifies as male, but has long supple hair and soft feminine features. Because of the witch he masquerades as her daughter, wearing skirts and pretending to be a woman for over a hundred years. In contrast to Saturday’s “masculinity,” Peregrine is delicate, gentle, and compassionate; that is, he possesses the traditional so-called “female” characteristics we usually see in fantasy/fairy tales.

It is Saturday that storms the castle (mistaken for a man) who saves the fair prince (mistaken for a woman) from the clutches of the Witch. This is, in my opinion, a fascinating dynamic, and I very much appreciate the inversion of character roles Alethea Kontis attempts in this book. While on its own, the gender reversal is…well…obvious, I appreciate the sentiment. Especially when you take under consideration the relationship that blossoms between the two characters. A favorite quote:

Saturday let her eyes linger on the lines of his dusky olive face, the softness of his countenance reflecting his sympathetic nature. He was soft where she was hard. Saturday was sure that no matter what face Peregrine wore, she’d always be able to see that tenderness within him, a quality she lacked.

He was dark where she was fair. She had stamina, he had grace. He was a flower and she was a tree.

While the character development is strong, and the writing in this second novel is finely-wrought, I did feel that the book suffered from a strange, stutter-start and stop effect. I found myself constantly going back a few pages, trying to clarify what I had previously read because chapters would end and jump ahead or confusingly backtrack. Similarly, there’s a strange imbalance to the pacing of the book with al lull in the first 70 or so pages, followed by a dynamic spurt of action, then another lull, and so on and so forth. The story also felt fluidly disjointed, with so many different, half-baked plot threads loosely connected by coincidence and magical circumstance. I’m not entirely convinced that everything truly adds up in a way that makes sense, but… perhaps that’s just me.

Overall, I thoroughly enjoyed the quick, lighthearted read that is Hero, and I dearly hope to read more of the Woodcutter family’s adventures in subsequent books. Recommended.

Saturday died for the fifth time that morning. Her shallow breath gently stirred the dust of the practice yard. She got to her feet, shook back the strands of hair that had come loose from her braid, and pushed a larger chunk back behind her ear, mixing the sweat and soil there into mud. the one clean thing on her person was the thin band of blue-green fabric wrapped around the wrist of her sword arm, a remnant of the only dress Saturday had ever worn. No matter how disgusting she got, it seemed this magic bracelet was as immune to filth as Saturday was immune to injury.