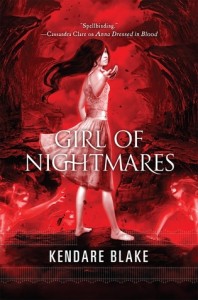 It’s been months since the ghost of Anna Korlov opened a door to Hell in her basement and disappeared into it, but ghost-hunter Cas Lowood can’t move on.

His friends remind him that Anna sacrificed herself so that Cas could live—not walk around half dead. He knows they’re right, but in Cas’s eyes, no living girl he meets can compare to the dead girl he fell in love with.

Cas doesn’t know what happened to Anna when she disappeared into Hell, but he knows she doesn’t deserve whatever is happening to her now. Anna saved Cas more than once, and it’s time for him to return the favor.

Stand alone or series: It’s a doulogy and a sequel to Anna Dressed on Blood

Why did I read this book: I read and enjoyed Anna Dressed in Blood so much, it was a fact I would have to read the conclusion to her story.

I read Anna Dressed in Blood last year for Halloween Week and thought it would be very appropriate to read its sequel, Girl of Nightmares, for this year’s festivities.

Girl of Nightmares picks up a few months since the events at the end of Anna Dressed in Blood when Anna sacrificed herself to save Cas and his friends and Cas still hasn’t moved on. And how could he? Not only there is all the guilt and the love he feels but also the pesky business of being plagued by nightmares and visions of Anna being horrendously tortured. Could this all be his imagination? Or are those real and Anna is being tormented? Cas will not rest until he has concrete answers.

I enjoyed this sequel very much but interestingly enough, I thought it was a different animal to its predecessor. Whereas Anna Dressed in Blood was firmly rooted in Horror (with a side of snarky comedy and romance) , Girl of Nightmares is more of an Adventure-Quest (still with a side of snarky comedy and romance). I mean, don’t get me wrong, there are moments of true Horror here (like the Forest of Suicides scene) but the focus is really on Cas’ quest to find Anna.

And just like in the previous book, this most immediate task of saving Anna develops in parallel to Cas’ character development. In terms of personality, Cas has come a long way since the start but he is still a kind of jackass who thinks of himself first. The opening scene of the novel when he is on a date with a nice girl and he behaves like a boor is a good indication of that. But at least now he fully recognises that. At the same time though, he has created roots and remains close friends with Thomas and Carmel. Cas’ narrative voice (first person, present tense) is a very engaging one for his wry humour and self-awareness (loved those moments when he acts as the veritable third wheel of the Thomas-Carmel dynamics).

In terms of the ghost-killing activities that Cas has inherited from his father, he realises that in order to save Anna, he must learn everything he can about his office and about his Athame, the Weapon that holds the key to go after her. In that sense, Cas finally questions everything he knows about what he does and how he does it, in a way that places his role in historical context.

In the meantime, I also loved all the questioning about saving Anna. Does Anna deserve what is happening to her? After all, as a ghost, she did kill countless people…But considering how she became a ghost in the first place, wasn’t she a victim too? So in a way, even though I missed terribly the savagery of Anna-Dressed-in-Blood, I found Anna’s storyline to be captivating. Although I do have to say I was never truly invested in the actual romance between Anna and Cas because I always regarded their relationship as something that could never, ever work. That kind of love story does not really float my boat. That said, I think this element of impossibility is on purpose and it is not supposed to be romantic: from Anna’s perspective, this is a last chance for redemption. From Cas’, an obvious consequence of the way he has cut himself from the world of the living. In a sense, theirs is more of a business relationship or a warped last-effort to save each other.

This series’ motifs, characters’ dynamics and Cas’ role of ghost-killer all remind me a lot of Buffy the Vampire Slayer, in a good way. By that I mean: I recognise the homage just enough to make me like the series as the books never cross the line into too-close-for-comfort territory.

Ultimately, this duology is really good fun and great Halloween reads. And even though Girl of Nightmares brings Anna’s story to a fitting conclusion, it does leave room for future stories featuring Cas, his friends and his Athame.

I think I killed a girl who looked like this once.

Yeah. Her name was Emily Danagger. She’d been murdered in her early teens, by a contractor working on her parents’ house. Her body was stuffed into the attic wall and plastered over.

I blink and mutter a vague answer to whatever question the girl next to me just asked. Emily’s cheekbones were higher. And the nose is different. But the shape of the face is so similar, it’s like I’m staring at the girl I tracked into the upstairs guest room. It took the better part of an hour, hacking with the athame at wall after wall as she seeped out of it, quietly trying to get behind me.

“I love monster movies,” says the girl beside me whose name I can’t remember. “Jigsaw and Jason are definitely my favorites. What about you?”

“I don’t much care for monster movies,” I reply, and don’t mention that neither Jigsaw nor Jason is technically a monster. “I like explosions, special effects.”

Cait Hecht. That’s this girl’s name. She’s another junior at Winston Churchill. She has hazel eyes, sort of too big for her face, but pretty. I don’t know what color Emily Danagger’s eyes were. By the time I met her, all the blood had leaked out of them. I remember her face, pale but not sightless, materializing through faded flower-print wallpaper. Now it seems dumb, but at the time it was the most intense game of dead-girl whack-a-mole ever. I was covered in sweat. It was a long time ago, when I was younger and more easily rattled. It would still be years before I’d go up against ghosts of any real strength—ghosts like Anna Korlov, the girl who could have torn out my spine anytime she liked, but wound up saving me instead.

Reading Next: The Haunting of Hill House by Shirley Jackson

Over at Kirkus: Wayward Deluxe Book 1 by Jim Zub