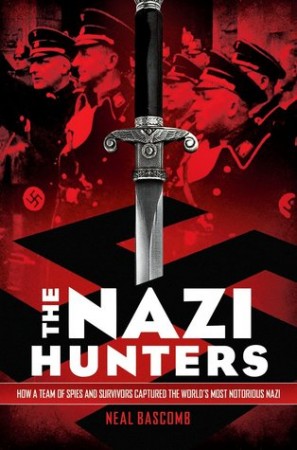 Title: The Nazi Hunters: How a Team of Spies and Survivors Captured the World’s Most Notorious Nazi

A thrilling spy mission, a moving Holocaust story, and a first-class work of narrative nonfiction.

In 1945, at the end of World War II, Adolf Eichmann, the head of operations for the Nazis’ Final Solution, walked into the mountains of Germany and vanished from view. Sixteen years later, an elite team of spies captured him at a bus stop in Argentina and smuggled him to Israel, resulting in one of the century’s most important trials — one that cemented the Holocaust in the public imagination.

THE NAZI HUNTERS is the thrilling and fascinating story of what happened between these two events. Survivor Simon Wiesenthal opened Eichmann’s case; a blind Argentinean and his teenage daughter provided crucial information. Finally, the Israeli spies — many of whom lost family in the Holocaust — embarked on their daring mission, recounted here in full. Based on the adult bestseller HUNTING EICHMANN, which is now in development as a major film, and illustrated with powerful photos throughout, THE NAZI HUNTERS is a can’t-miss work of narrative nonfiction for middle-grade and YA readers.

How did I get this book: ARC from the publisher (BEA)

Why did I read this book: Ana and I have both decided to read and review more narrative nonfiction in 2013. When I heard about this book at this year’s Book Blogger Conference, I was eager to get my hands on a copy. A narrative nonfiction work detailing the sixteen-year process of hunting down and capturing Adolf Eichmann, specifically written for a crossover middle grade-young adult audience for use in schools? YES please.

In May 1960, a covert team of Israeli spies captured Adolf Eichmann, one of the most highly-sought escaped Nazis following WWII. Called the Architect of the Holocaust and the man behind the Nazi strategy and operational invocation of the Final Solution to the Jewish Problem, Eichmann’s capture, transportation to Israel, and ensuing trial represent a transformative moment in Jewish history. In The Nazi Hunters, Neal Bascomb (author of adult narrative nonfiction novel Hunting Eichmann) tells the thrilling story of the people who found and captured Eichmann, and how they were able to bring him to Israel to face justice. Complete with photographs, maps, and images of secret documents and correspondence, Bascomb relates the harrowing discovery, capture, and retribution in a fast-paced, almost cinematic fashion.

I’m of two minds when it comes to The Nazi Hunters. First, the good: it is a fantastic, tautly written spy thriller, complete with details about secret car compartments and license plate changing mechanisms, airplane routes and travel plans, as well as a deep dive into the context of the Holocaust and Argentina’s role in offering shelter for former Nazis following World War II. It enumerates the arduous road that led to Adolf Eichmann’s discovery – a fifteen year process involving civilians (including a blind man and his young daughter) as well as a group of highly trained spies – and the steps of those involved in secretly extracting Eichmann from his vigilant sons and unbeknownst to the Argentine government. The Nazi Hunters‘ greatest success, though, is in the way it hammers home the significance of Eichmann’s capture and trial. As repeated many times throughout the book:

The Eichmann trial in 1961 was a controversial and transformative moment in the history of the Jewish people, and for the new state of Israel. The internationally broadcasted trial was a spark that accomplished what Israel’s first Prime Minister, David Ben-Gurion sought to achieve – it forced the world to acknowledge and understand the true nature of the Holocaust, and it provided the Holocaust’s survivors a chance to share their experiences, openly and for the world to hear, for the first time. In Bascomb’s words:

The Shoah, as it was also known, was not to be forgotten, and an outpouring of survivor memoirs, shcolarly works, plays novels, documentaries, paintings, museum exhibits, and films followed in the wake of the trial and still continues today. This consciousness, in Israel and throughout the world, is the enduring legacy of the operation to capture Adolf Eichmann.

Beyond the cultural and historical significance of the book’s subject, I’m also impressed by the amount of research that must have gone into writing this book (or, perhaps, that has been adapted from the author’s bestselling adult book, Hunting Eichmann). We learn of the documents that needed to be forged as well as the airline and flight plan that had to be arranged at the highest levels to avoid suspicion. There are pictures of Eichmann in captivity, wearing blacked out goggles to disorient and imprison him; there are images of artwork created by one of the men on the team who captured Eichmann in Argentina.

In all, this is an impressive work.

That said, I do have a few reservations that I will try to explain, hopefully in a way that is respectful of the source material, but makes sense in the context of this as a book for new generations. First, there’s the question of style and primary sources. The Nazi Hunters is an undeniable thriller and cinematic in scope, but there is no footnoting or source referencing in the body of the narrative, although there is an extensive notes section in the back of the book (perhaps this is only in my ARC and addressed in the final book). Additionally, there’s no examination of the legality of Eichmann’s trial, the diplomatic tensions and historical context of the trial outside of Israel – which is also hugely important. There is very little time spent on the trial itself, and more pages spent on the depiction of Eichmann’s hanging than anything he said during the trial.

Which brings me to the crux of my problem with this book. The Nazi Hunters is very clear that there is GOOD and there is EVIL. Adolf Eichmann is presented at multiple times throughout the book as pure evil. For example at one point, when a spy is trailing Eichmann on his bus route home:

Aharoni felt a rush of emotion that left him physically weak. Severely distressed, he could not wait to get off at the San Fernando station. If there was ever any doubt in his mind that they were after more than just a man, this brief encounter dispelled that doubt. He felt they were closing in on evil itself.

I understand the sentiment – this is the man who was in charge of the strategic and operational implementation of deceit and mass murder, moving the Jews from their homes to the ghettos and then eventually to the labor and death camps. But the general label of Evil and the repeated assertion that the undercover Jewish agents in this book were “guardian angels of justice, the emissaries of the Jewish people” or “chosen by destiny” makes me uncomfortable without examining this in a broader context. I am also uncomfortable with historical analysis that editorializes and uses labels like Good and Evil.

Perhaps the best way to sum this up is by saying this: The Nazi Hunters is a fine book and tells an important story, but I would encourage students to read Hannah Arendt’s Eichmann in Jerusalem (a collection of her incisive articles originally published in The New Yorker as she covered the trial) as well.

Reading Next: The Bone Season by Samantha Shannon