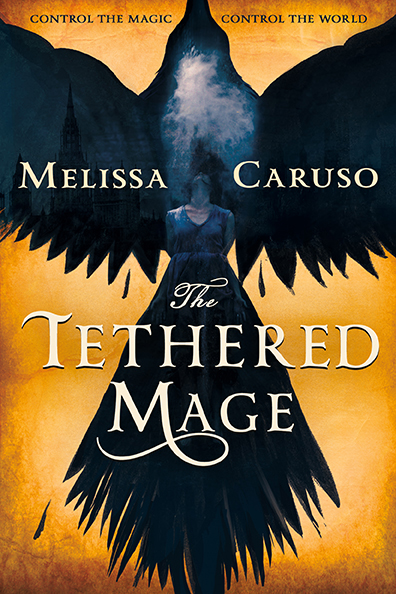 In the Raverran Empire, magic is scarce and those born with power are strictly controlled — taken as children and conscripted into the Falcon Army.

Zaira has lived her life on the streets to avoid this fate, hiding her mage-mark and thieving to survive. But hers is a rare and dangerous magic, one that threatens the entire empire.

Lady Amalia Cornaro was never meant to be a Falconer. Heiress and scholar, she was born into a treacherous world of political machinations.

But fate has bound the heir and the mage. And as war looms on the horizon, a single spark could turn their city into a pyre.

The Tethered Mage is the first novel in a spellbinding new fantasy series.

Stand alone or series: Book 1 in the Swords and Fire series

In the Serene Empire of Raverra, two women of very different walks of life find their fates inexplicably intertwined–all this, due to a chance encounter on the streets of the Tallows.

Lady Amalia is the Cornaro heir and the only daughter of the formidable La Contessa, who sits on the Empire’s ruling Council of Nine. Amalia knows all too well the responsibility and expectation laid upon her shoulders, having narrowly escaped multiple assassination attempts her entire life–for example, as a child Amalia was poisoned with Demon’s Tears, meaning she must take an antidote elixir twice a day for the rest of her days. For all her understanding, preparation, and desire to do well by her powerful mother, Amalia struggles with her inevitable future and the political games that come with being Lady Cornaro. A scholar and an inventor, all Amalia has truly ever wanted was to lose herself in her studies of artifice and runes, books and magic. All of that changes the day that Amalia sneaks out of her home to pick up a very rare book in the heart of the city’s slums–because that’s the day she meets Zaira.

Zaira is a thief, a scavenger, and a survivor. She also happens to be a mage with the rare ability to command balefire. For her entire life, Zaira has managed to hide her ability and her tell-tale mage-marked eye–but fate has a way of catching up to even the cleverest of thiefs. It is on the streets of the Tallows that Zaira’s cornered by a rival gang who forces her to finally unveil herself as a fire mage, and she unleashes the full measure of her fury in fire and ash. But, like all other warlocks with rare and incredible power, Zaira’s magic quickly escalates without control–in her rage, the balefire threatens to consume the rest of the Tallows when she starts to slip and become drunk with power. Amalia, watching from the sidelines, is horrified for the innocent lives caught in the fire, and for her city.

Luckily for Zaira and Amalia, a Falconer happens to be on the scene as well. Handing a special kind of bracelet called a jess to Amalia, Marcello instructs her to slip over the wrist of Zaira before she burns down all of the Tallows in her rage. And, in so doing, the Falconer has unwittingly changed the course of history, for now Lady Amalia–aristocrat, powerful leader, and a future member of the Council of Nine–is singularly and inextricably responsible for one of the most powerful Falcons in the Raverran Empire’s arsenal. For while Falcons are given protection and offered every luxury and comfort within palace walls, they are also prisoners, soldiers, and weapons to be unleashed upon the Empire’s enemies with a single word. Tethered by their jesses, Falcons can no longer unleash their power alone; they are bound to the will of their particular Falconer. One word uttered only by the Falconer’s lips will unlock the Falcon’s power, and only one word will seal that power once again.

Zaira hates every minute of being enslaved and will do anything she can to escape her Falconer. Amalia has unwittingly become one of the most powerful and reviled ruling family members of Raverra. And now, with the kidnapping of several aristocratic children (ostensibly by the Raverran Falconers), a war is brewing with the province of Ardence–with Zaira and Amalia caught in the middle. Together, Falcon and Falconer must figure out how to prevent their world from burning–if Amalia can figure out how to earn Zaira’s trust and friendship, first.

I was not expecting this book in any capacity. When I received a copy of The Tethered Mage in the mail, I hadn’t heard much about it but decided that this might be a good thing and decided to take the plunge. Being in a fantasy mood of late, The Tethered Mage sounded like exactly the type of book I wanted… and holy crap, was it ever. A historical traditional fantasy novel set in an alternate Renaissance Venice–this version, a “serene” empire of Raverra–The Tethered Mage is freaking AWESOME. Melissa Caruso manages to create a believable historical world, explore the nuances of agencies created to both protect and exploit mages, explain a magical system that relies on rules that make sense, AND establish fully-developed multifaceted characters. All this, in the span of a first novel in a brand new series–it’s one of the best first novels in a brand new high fantasy series that I’ve read in ages. Suffice it to say, I am a fan and I want more. Immediately.

One of the things I was most taken with in The Tethered Mage was the world itself. Caruso creates a secondary world modeled off of Venice in its prime–there is a Dodge who guides but does not necessarily control a council of powerful ruling families with deep pockets and long lineages. Many of the key players in this world are women, such as Amalia’s mother, La Contessa–and while the Dodge is the provisional head of Raverra, La Contessa is one of the finest and most adept players of the game of politics here. As with any empire, the outlying provinces and regions–especially those who may be losing trade or are impacted by war or economic hardship–start to chafe at their serene overlords. Ardence, a neighboring province with its own noble families, is incensed when some of its children are snatched by Falconers in the night, and stirrings of rebellion grow louder, inflaming already tense relationships with Raverra. An independent kingdom, Vaskandar, seizes upon this unrest and begins to make its own moves to chip away at Raverra’s other borders and outer regions, inciting discord and causing all kinds of trouble. And in this political hotbed of tension–there are the Falcons and Falconers.

As much as I love some good political machinations, I love fantasy worlds even more when there are rules to magic that make sense. In The Tethered Mage, this all happens with the system of Falcons that Raverra has imposed on its mages. Found as children–thanks to the tell-tale ring that forms around a mage’s pupil, in addition to manifested powers–Raverra has created an organization called the Falcons. When a mage is discovered as a child, the rule of law states that these children must be given over to the Falcons–for the good of the empire, and for the mage and the mage’s family. The child is conscripted into the service of the empire, and over time is matched with a trained and groomed Falconer, who will be tethered to that mage for as long as they live. The Falconer alone has the ability to allow its Falcon to unleash their magical power; the Falconer too is the only one who can extinguish their Falcon’s magic. This entire system sounds incredibly exploitative and dystopian, doesn’t it? But Caruso does a beautiful job of exploring the reasons behind Raverra’s system by presenting both sides of the argument–from Marcello’s perspective, mages historically have been tyrants or preyed upon and ruthlessly exploited by others over the course of this world’s history, and the Falcons offer security, peace, and comfort to mages and their families. As magic is unstable and threatens to completely consume the mage, the Falcons also offer a support system for the tethered mage. From Zaira’s perspective, no other person should have the right to control her power or make decisions about when she should use her power, except for herself. She resents her Falconer, hates being enlisted into these petty games of power and politics, and chafes against her captors and enemies every single day since her jess was slipped on her wrist. There are no easy answers here–and I love a book that takes the time to explore these nuances so thoroughly and in such thought-provoking fashion.

The last thing I’ll talk about is the strength of the amazing characters in this remarkable book. I loved Amalia’s characterization–she is our primary, first person narrator–and the exploration of her thoughts as she tries to navigate a very tricky board, on which she never wanted to be a player. I loved the relationships that Amalia forges in this particular book–especially the relationship with her mother, La Contessa. I kept thinking while I was reading this novel that if it were written or edited in a traditional YA fantasy space, it would have been so easy to turn La Contessa into a cruel, simplistic villain–or tell the story from Zaira’s fiery perspective, all rage and self righteousness and magic. Instead, Caruso gives us a layered, powerful relationship between mother and daughter–La Contessa follows her daughter’s every move, but she does not make Amalia’s decisions, and she trusts that her daughter will find her own way to play the game and survive. There is a relationship of respect here, but one of love, too–as much love and tenderness as two women in a very dangerous world can show. Almost as much as I loved the relationship between the Cornaros, I also loved the contentious relationship between Amalia and Zaira. We readers are in Amalia’s head the entire book so we have a very different perspective than, say, if we were in Zaira’s head. I love this choice–instead of being self-focused, Amalia’s narrative is concerned with several external factors.

Finally, of course there’s a bit of romance in this book which was predictable–but I love that it’s not inevitable. Amalia makes choices that she must, and there is very little melodrama about it all. In fact, it all feels rather d’Artagnan Romances in nature–the entire book felt reminiscent to me of Alexandre Dumas–I say this with the highest respect as these were my favorite classic adventures–and The Tethered Mage has female characters at its heart so all the better.

If you’re hungry for a new fantasy series with awesome, nuanced characters, powerful worldbuilding, and solid writing–look no further. The Tethered Mage is the book you need right now. Absolutely recommended, and on my shortlist for favorite books so far in 2017.