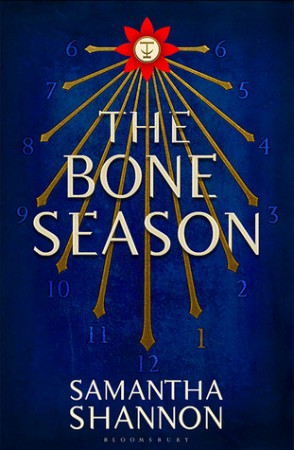 It is the year 2059. Several major world cities are under the control of a security force called Scion. Paige Mahoney works in the criminal underworld of Scion London, part of a secret cell known as the Seven Seals. The work she does is unusual: scouting for information by breaking into others’ minds. Paige is a dreamwalker, a rare kind of clairvoyant, and in this world, the voyants commit treason simply by breathing.

But when Paige is captured and arrested, she encounters a power more sinister even than Scion. The voyant prison is a separate city—Oxford, erased from the map two centuries ago and now controlled by a powerful, otherworldly race. These creatures, the Rephaim, value the voyants highly—as soldiers in their army.

Paige is assigned to a Rephaite keeper, Warden, who will be in charge of her care and training. He is her master. Her natural enemy. But if she wants to regain her freedom, Paige will have to learn something of his mind and his own mysterious motives.

The Bone Season introduces a compelling heroine—a young woman learning to harness her powers in a world where everything has been taken from her. It also introduces an extraordinary young writer, with huge ambition and a teeming imagination. Samantha Shannon has created a bold new reality in this riveting debut.

Stand alone or series: Book 1 in a 7 book series

Why did I read this book: The debut novel from a very young Oxford graduate author, the first in a Rowling-esque 7 book series, and already optioned for film by Andy Serkis (Lord of the Rings, y’all), The Bone Season has garnered an impressive amount of buzz. When we were approached to be a part of the official blog tour, I eagerly accepted with one burning question in my mind – could this book live up to the hype?

In 2059, the world is a very different, very dangerous place. Thankfully, Scion exists and controls that danger, its cities bearing the slogan “Welcome to Scion, no safer place.” Scion regulates every aspect of its citizens’ life, from travel, to education, to occupation. Most importantly, Scion protects humans from the very real terrorizing threat of voyants; clairvoyants, that is people with the ability to divine the future, or control and commune with spirits, or any order of other mysterious, magical, unnatural ability. Nineteen-year-old Paige Mahoney is one such illegal voyant, who has turned to a secret life of crime and joined one of London’s underground gangs of clairvoyants in order to stay alive. Paige isn’t just any old soothsayer or sybil, though – she’s an extremely rare, very powerful order of clairvoyant with the ability to “touch” and walk in other peoples’ dreamscapes (otherwise known as a dreamwalker). So, when Paige is discovered by Scion security forces, captured, and thrown into the Tower, she fears that she will be tortured before she is killed, another vanished voyant in Scion’s legacy.

Except… Paige isn’t killed. She and a group of other voyant prisoners (plus one regular human) are transported from London to the supposedly dead and contaminated city of Oxford, where they are enslaved by a race of creatures called Rephaim. It turns out that 200 years prior a hole was ripped in the aether (the realm of the spirit that voyants can see and access in various ways), and these superior alien creatures emerged and instituted themselves as Earth’s supposedly reluctant “guardians.” The Rephaim have set up Scion as a dummy government, and have been farming its cities every decade – in a reaping called “The Bone Season” – for promising voyants to enslave and conscript into a fight against the Emim (mindless, ravenous monsters who have also traveled through the void in space). Very quickly, Paige learns that the Rephaim are anything but benevolent protectors; they are terrifyingly cruel, bearing absolute power and no vulnerability. Yet, as enraged, frightened and defiant Paige may be, her only chance of survival is to follow the orders of her masters, including the Rephaim that has claimed her as his responsibility, the beautiful (and aptly named) Warden. And, as Paige learns more about the Rephaim and their plans for Paige’s singular ability as a dreamwalker, she also learns that not all Rephaim are the same – that Warden might not be her enemy.

I don’t think I’m exaggerating when I say that The Bone Season is one of the most hyped and highly anticipated books of 2013. With its young author being touted as the next J.K. Rowling, The Bone Season has a whole lot to live up to. And, as with any super-hyped book, I’m always curious but more than a little wary because it’s a very rare thing for a book to actually live up to all the preceding hype. The Bone Season, is… well, it’s ambitious. It’s very ambitious and impressive in its imaginative scope. I loved the intricate hierarchies of “voyants” and power structures of street gang lords versus their puppet Scion government, just as I was impressed with the portrayal of the extensive power that the Rephaim have over regular humans and voyants alike. Two of my favorite things about The Bone Season are its fantastic depiction of the different levels of clairvoyance, as well as the examination of enslavement and the trappings of power. I love the way that we learn slowly about the truth of the Rephaim and their presence on Earth, just as we learn more about the voyants (especially Paige) that embody the human spirit to challenge, to rebel, and to survive – both the persecuted by Scion, and their abusive Rephaim overlords.

Those praises about the more complex thematic and worldbuilding aspects said, The Bone Season doesn’t actually quite manage to pull it off a cohesive novel because there’s so MUCH going on. Just as I was impressed with the many levels of voyants (not to mention the extensive glossary, maps, and power flow chart), there were many puzzling things about this world that don’t quite add up, or feel half-developed and then elaborated upon wildly at random intervals (in other words, it’s hard to suspend disbelief). The Rephaim, for instance, are not just powerful otherworldly creatures who have traveled through a rift in space to Earth, proclaiming themselves as Earth’s reluctant protectors and saviors from a race of man-eating carnivorous monsters called Emim. No, the Rephaim are also beautiful creatures (conveniently human in appearance) with their own type of superspecial connection to the aether, and who can feed off of human clairvoyant auras (and, in a very Twilight-esque twist, anytime a Rephaim aura-feeds, their eyes change color from golden honey brown to blood red). Oh, and these Rephaim also can heal themselves by drinking human blood (this new skill is revealed about 200 pages into the book). Needless to say, while there are many interesting ideas in the book, it’s a little tough to swallow a dystopian science fiction future with clairvoyants AND ghosts and poltergeists AND cruel psychic-vampire creatures.

In truth The Bone Season is, at its heart, a paranormal-cum-dystopian novel in the vein of many YA novels on the market today. It plays with the mundane, standby tropes of this genre: there’s the SUPER HOT paranormal creature that takes interest in the young pretty human girl; young pretty human girl also happens to possess an exceptional, unique, unparalleled power on which the Destiny of Everything hinges; after a period of trust issues and tension, romantic shenanigans ensue (thoroughly PG-13 romantic entanglements, I might add). It actually feels very similar to Laini Taylor’s Daughter of Smoke and Bone, with its feisty, special heroine, romantic overtones, imaginative world. But… lacking the same polish and writerly skill. That is to say, the writing is clunky and feels very much like a debut novelist’s first book. Infodumps about voyants and the Rephaim abound, with backstory and detail divulged in graceless, obvious ways (early in the book, for example, readers are entreated to a description of Paige when she is conveniently bored and pulls out her digital ID; we learn all the answers of Rephaim history in extensive point-blank Q&A sessions; and so on and so forth). The book is overlong, too; the overarching plot frequently lost in asides as Paige goes through her daily routine of anger and fear, alternately resenting yet needing to save/trust/inevitably falling for her smoking hot Rephaim keeper. (I don’t consider this a spoiler – it’s telegraphed from the beginning.)

So, my answer to the question posed at the beginning of this book (does The Bone Season live up to the hype) is a regretful no, though the book has some great ideas and an impressively ambitious agenda. Ultimately, I was entertained by The Bone Season and will likely return for book 2 (although, to be honest, I have no idea where this series will possibly go in a 7 – SEVEN! – book arc). Recommended, but with some reservations.

I like to imagine there were more of us in the beginning. Not many, I suppose. But more than there are now.

Not all of us know what we are. Some of us die without ever knowing. Some of us know, and we never get caught. But we’re out there.

I had lived in that part of London that used to be called Islington since I was eight. I attended a private school for girls, leaving at sixteen to work. That was in the year 2056. AS 127, if you use the Scion calendar. It was expected of young men and women to scratch out a living wherever they could, which was usually behind a counter of one sort or another. There were plenty of jobs in the service industry. My father thought I would lead a simple life; that I was bright but unambitious, complacent with whatever work life threw at me.

My father, as usual, was wrong.

From the age of sixteen I had worked in the criminal underworld of Scion London—SciLo, as we called it on the streets. I worked among ruthless gangs of voyants, all willing to floor each other to survive. All part of a citadel-wide syndicate headed by the Underlord. Pushed to the edge of society, we were forced into crime to prosper. And so we became more hated. We made the stories true. 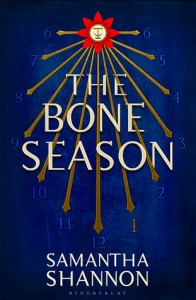 We have ONE copy of The Bone Season up for grabs! The contest is open to everyone and will run until Sunday, September 1 at 12:01am (ET). To enter, use the form below! GOOD LUCK!

Joint Review: What We Saw at Night by Jacquelyn Mitchard