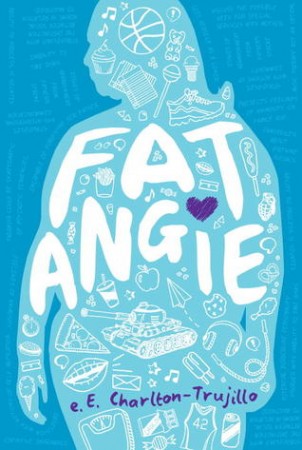 Her sister was captured in Iraq, she’s the resident laughingstock at school, and her therapist tells her to count instead of eat. Can a daring new girl in her life really change anything?

Angie is broken — by her can’t-be-bothered mother, by her high-school tormenters, and by being the only one who thinks her varsity-athlete-turned-war-hero sister is still alive. Hiding under a mountain of junk food hasn’t kept the pain (or the shouts of “crazy mad cow!”) away. Having failed to kill herself — in front of a gym full of kids — she’s back at high school just trying to make it through each day. That is, until the arrival of KC Romance, the kind of girl who doesn’t exist in Dryfalls, Ohio. A girl who is one hundred and ninety-nine percent wow! A girl who never sees her as Fat Angie, and who knows too well that the package doesn’t always match what’s inside. With an offbeat sensibility, mean girls to rival a horror classic, and characters both outrageous and touching, this darkly comic anti-romantic romance will appeal to anyone who likes entertaining and meaningful fiction.

Why did I read this book: I managed to miss it last year but then the awards started coming in (Lambda Literary Award Nominee (2014), Stonewall Book Award-Mike Morgan and Larry Romans Children’s & Young Adult Literature Award (2014), American Library Association Rainbow List (2014)) and I had to read it.

It’s been a few months since Angie’s breakdown and suicide attempt after her sister was captured in Iraq and presumed dead. Her life is miserable: she is the butt of everybody’s jokes at school where she is known as Fat Angie; her can’t-be-bothered mother is downright abusive when addressing Angie and her weight; her adopted brother Wang has turned into a monster, and her psychologist is completely useless. And nobody but Angie believes that her sister is still alive.

Enter KC Romance. A wow-girl that knocks everybody’s socks off and who seems to be interested in Angie, of all people. She is the only person to not call her Fat Angie and to see through to the real Angie. They strike up a friendship and start to fall for each other.

Stonewall Book Award winner and a Lambda Literary nominee for 2014, Fat Angie is an uncompromising yet hopeful book portraying a difficult moment in its protagonist’s life. Angie is tormented at school and at home, with very few moments to even catch a breath. Her mother cruelly tells her “No one is ever going to love you if you stay fat.” Her brother is as much as a bully as the kids at school. Her psychologist doesn’t really listen to Angie – here is a typical interaction between the two:

”I don’t think people wanna see me,” Fat Angie had said. “I don’t think they understand me.”
The therapist had made a note: Potential borderline personality disorder with inability to take risks.

Unsurprisingly, falling for KC feels like the most natural thing in the world. But what I like the best about the portrayal of their romance is that even though the two anchor each other (for KC also has difficult problems) and know real intimacy and happiness when together, neither becomes the other’s “magical” solution that will solve their problems. In fact, a lot of Angie’s struggles are unrelated to KC and most of the book concerns itself with Angie’s drive to keep her sister’s memory alive. Angie’s attempt to pay tribute to a sister that was so beloved by playing basketball and being awesome at it, is beautiful and super cool (for Angie is fat but being fat never stops her from being fit, despite what everybody might believe).

The narrative is another side of the novel that completely won me over. It’s kind of meandering and at times felt like stream of consciousness was at play with Angie’s thoughts going back and forth without clear breaks. This is very effective in capturing her mental state especially how at times, Angie was full-on into internalisation what people said about her and the narrative would address her as “Fat Angie”. But when she was feeling free and able to just be herself, it was simply “Angie” – this transition is always smooth even when it’s as close as within the same page.

It’s tempting to call Fat Angie an “issue book” and even to go as far as to say that this is a book with far too many issues tackled together. There is bullying, fat shaming, cutting, homophobia as well as difficult family life, mental health issues, and more. But I feel uneasy to say something like that: it’s not like it’s possible to compartmentalise people’s lives like this and separate issues as though those different problems couldn’t affect one person.

Instead, I will call it beautifully written, painful, romantic, uplifting and touching.

Reading Next: Deep Down by Deborah Coates

Ebook available for kindle US & iBooks