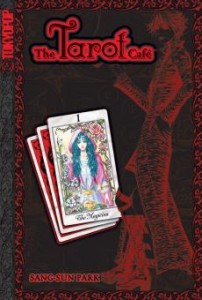 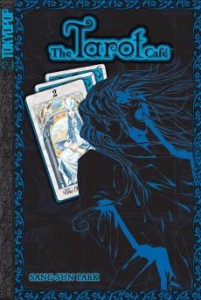 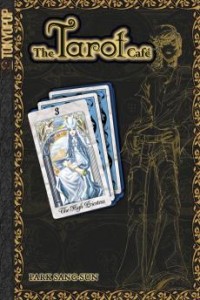 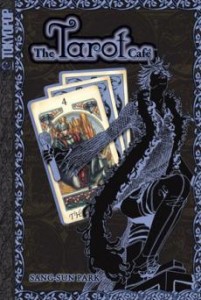 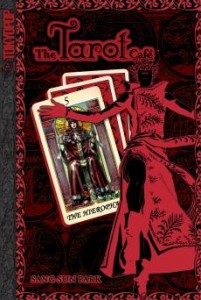 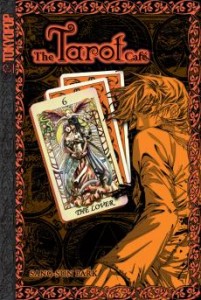 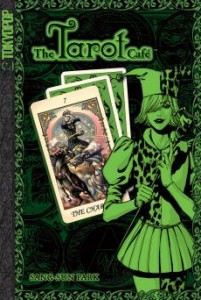 Summary: (Wikipedia) In contemporary Great Britain, Pamela is the owner of a mysterious Tarot Cafe. After midnight, she receives supernatural clients who come to her for advice through tarot readings. From cats to fairies to vampires, they tell her their stories even as she unravels their past, present and future through her cards. In exchange for her advice, they pay her with beads of Berial’s Necklace, which Pamela gathers for her own secret ends

Why Did I Read The Book – It was the reading of the newly published companion novel for this series that initiated the talk for a Manga Appreciation Week. I thought it was more than appropriate that I read the series beforehand.

I had never heard about the Tarot Cafe until Karen Mahoney told us about the companion novel which was what prompted us for this Manga Appreciation Week. Before reading the novel, I thought I should read the series and boy, was I glad because I ended up really enjoying it.

The Tarot Cafe is a very successful, seven volume Manwha series, written and illustrated by Park Sang-sun, originally published in Korean and then translated into English by Tokyopop. The seventh and final volume was released in 2008.

Instead of writing a review for each volume I decided to write a review of the entire series since there is one clear story at the centre of it all.

Basically, The Tarot Café is set in present day England and is the story of Pamela, an 800 year old immortal seer (of past and future) who runs the Tarot Cafe and reads Tarot for a living. Pamela became immortal by accident when her lover, the dragon Ash, died in her arms and a drop of blood from his heart touched Pamela’s forehead (the blood of a dragon’s heart = source of immortal life) leaving a mark.

Pamela has been trying to find a way to die ever since so that she can be reunited with Ash. Her best bet is to fulfil her pact with the mysterious Belus who in exchange for the beads of a broken necklace belonging to a Hell’s Prince, the Demon Belial, will grant her mortality again.

Pamela does regular Tarot readings during the day but after midnight she receives a whole range of paranormal beings seeking her advice – and who pay her with the precious beads she needs to complete the set and fulfil her bargain.

The format, the story, the works:

Each chapter opens with the illustration of a Tarot card from a well-known Tarot deck( ie. Mythological, Art Nouveau ,and so on and so forth)replaced with a character from the story at hand. The episodes – usually Pamela’s reading to a particular visitor is divided in past and present – each card unfolds a memory that brings it forth to the reader, to Pamela and to the client. This is part of Pamela’s power as well – the ability to connect the client to his or her past as part of the reading and a means to help them to see the path ahead. It is very clear that the author is a connoisseur of Tarot and each panel that has a card also come with the explanation of its proprieties.

If the premise of the story in itself is very original – how many times have we read Quests for immortal life; I don’t recall ever reading a story with the direct opposite: the search of a mortal life – it is the format that makes this series a very smart one – because each reading takes Pamela closer to her goal whilst at the same presenting us with a myriad of intriguing characters and fairytale-like stories.

These episodes also help us understanding who Pamela is, how she relates to some of the themes that emerge with every reading – love, hate, revenge, loss – giving us the pleasure of getting to know the character – how very giving she is, how she is generous in helping people and how she doesn’t make judgments of her client’s or her friends’ actions. One such client , a boy named Aaron becomes her close friend and ally as he starts to work for Pamela at the Café.

(Side note: His reason for asking Pamela’s help with a reading has to do with another mysterious character called Nebiros who is essential for the series’ climax. )

And as the volumes progress some of the readings prompt Pamela to remember her own past –and this is when things really get going and the volumes get less episodic and with a clear story arc.

It all begins when practically at the same time Alecto , another dragon that has his reasons to hate Pamela AND Ash – The Ash – Pamela’s one true love, come back into her life. But with a twist: Ash has no memories of his past life and has a clear sociopath personality that is the catalyst for everything that happens next – from Pamela’s journey to her past and all the turns of her story. How her mother was burnt as a witch to save her daughter’s life, how it is all connected with a monk that was obsessed with Pamela and how Ash –found her, saved her, took care of her and eventually became her lover but also how he eventually proved to be something else entirely – betrayer perhaps? Most of all, we and Pamela realise just exactly what everything has to with the Demon Belial himself – who shows up here and there throughout the series at the most unexpected moments.

And of course there is Belus.

The enigmatic character that is always around. It is not clear if he is friend of foe as he seems to know more than he lets in. He is sardonic , completely cynical about everything and with a tendency of knowing too many characters he is not supposed to; whilst at the same time, being always there for Pamela: at the Café and in those moments when Pamela needs the most –many times he shows up at the brick of time and saves her life. Both repeat ad nauseam through the series that theirs is strictly a business association, but we clever people know better than that. He is also absolutely stunning – needless to say, Belus is my favourite character.

Not everything is what it looks like in this series. That is this great gothic feel and nothing is black and white, there’s gotta be a measure of acceptance for characters (protagonist and secondary) that have a darker streak to them – we are talking about demons and witches after all. There is a balance between darker episodes and lighter ones though.

I feel I am being very cryptic but I am avoiding spoilers at all costs in order to preserve the surprises. And there are many.

The art:
Dazzlingly beautiful –simple and effective. The lines are clear and to the point. And since pictures are worth more than a thousand words: 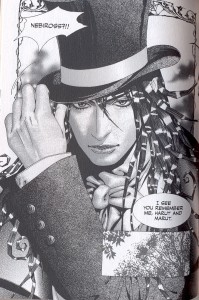 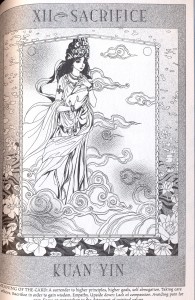 Pamela and a Tarot Card 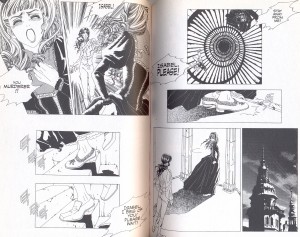 Example of a Tarot reading

There are a couple of points that kept me from giving this a higher rate.

Some of the dialogue was dreadful – really simplistic. I am not sure though if this is a limitation of the genre or a translation problem?

Although the ongoing story of Pamela’s search for mortality is the basis for the series there are many episodes with her Tarot readings that are not directly connected to the overall arc and a few of those I thought were rather mediocre – they felt like they were mere story fillers.

Even though I LOVED the art for the most part, some of it confused me – specially the men. They looked like women and, they looked all the same to me. Especially at the beginning, I had to re-read some parts to make sure I knew who the story related to. It took some time to get used to the way men were depicted but having said that CURSE ME, if I wasn’t drooling for all of them when I closed the last page.

If you are new to Manga, The Tarot Cafe is a good place to start. If you don’t want to commit to the seven volumes at once , I would recommend you to get at least volumes 1 and 2 as the first one in itself is not enough to give you the sense of what is to come, that only happens from volume 2 onwards.

Even with the minor grudges, I loved the Tarot Cafe. I became more and more engrossed with each volume – I was able to keep my cool and a certain distance up to volume 4 but from volume 5 onwards I was frantically reading and I couldn’t turn the pages fast enough. As the plot thickened and the story progressed to its fabulous climax, twists and revelations kept coming hard and fast and there was one particular “revelation” that left me completely dumbfounded because I did not see it coming .

I simply loved how everything ended: in a bittersweet fashion, with some open and unresolved issues and in that beautiful (and yet some times, disturbing) shade of grey that permeates the entire series. It was a very fitting ending and perfectly satisfying.

Reading Next: The Tarot Cafe – The Wild Hunt by Chandra Rooney