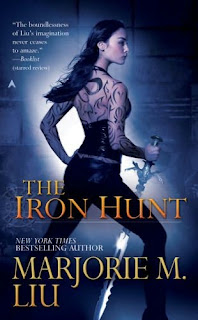 Stand alone or series: First novel in the Hunter Kiss series (although preceded by the novella “Hunter Kiss”)

Why did I read this book: Ana had just finished reading The Wild Road by this author and could not stop raving about her writing. So, when I saw that she had a new urban fantasy release out, I had to give it a try.

Summary: (from amazon.com)
Demon hunter Maxine Kiss wears her armor as tattoos, which unwind from her body to take on forms of their own at night. They stand between her and her enemies, just as Maxine stands between humanity and the demons breaking out from behind the prison veils. It is a life lacking in love, reveling in death, until one moment—and one man— changes everything.

Wow. Ana and I can have different opinions sometimes, but if The Iron Hunt is any indicator of Ms. Liu’s writing, then count me in. I loved this strange, poetic, darkly beautiful book.

“When I was eight, my mother lost me to zombies in a one-card draw.”

And so begins the story of Maxine Kiss. She is the the last of her kind, daughter to Jolene Kiss. She learns everything she has ever needed from Jolene–to fight, to protect, and most of all to trust no one except her small family of her mother and “the boys”. And one day, when Maxine is still a young woman, she inherits the role as Hunter when the Boys become hers, and her mother’s brains are blown out in front of her by a zombie. During the day, the Boys are Maxine’s tattoos, covering every inch of her body beneath her face. They are her armor–from sunrise to sunset, while the Boys slumber, she is invincible. By night, the Boys awaken, and peel themselves from the Hunter’s body. They are little demons, eaters of iron and steel, and Maxine’s only trusted family. They are silent except for Zee, who speaks in riddles.

Many years ago, demons walked the earth and roamed the universe. Other beings were able to capture these demons though, and hold them behind the veil, in a prison of air and dimension. Hunters were given the job of vanquishing any escaped demons, and to protect humans from their kind. The Kiss bloodline has held this duty for generations, passing responsibility from mother to daughter, until Maxine.

Human detectives come looking for her. A man has been murdered, and on his body he held a scrap of paper with the name “Maxine Kiss” written upon its surface–which in of itself is enough to alarm her and her lover, since she almost always uses an alias. Maxine sets off to find out who this murdered man is, and finds that he was a private investigator, sent by persons unknown to check up on her. In her search, she finds a young homeless boy who witnessed the murder, and later with the detective’s belongings a photograph of her grandmother and a smiling man.

Meanwhile, demons are making themselves known. Blood Mama and her zombies seek out Maxine. The veil is failing, and something sinister has slipped through. And, there is something dangerous about Maxine–something that even the zombies who saw her as a young child urged Jolene to kill, and try for another daughter. Bearing a new demon’s mark, Maxine struggles to unravel the secrets and bargains of her family, and control the stirring darkness within.

This was my first book by Marjorie M. Liu, and despite Ana’s high praise, I did not know what to expect. I was taken aback by this beautiful, completely unique book. I loved The Iron Hunt. From the characters, to the plot, to Ms. Liu’s beautiful, poetic prose, I am completely 100% sold.

The Iron Hunt is actually book 2 of the Hunter Kiss stories–it is preceded by the novella “Hunter Kiss” in the anthology Wild Thing. I had no idea about the preceding story and had not read “Hunter Kiss”, but I didn’t have too any trouble getting into the book. From the opening line of this story, I was fully immersed in Maxine Kiss’s world. Marjorie M. Liu does not ‘data dump’, nor does she take unnecessary asides to explain things point-blank to the reader. Instead, the voice of Maxine Kiss, with all her disjointed thoughts and emotions completely dominate the story from beginning to end. I cannot begin to describe how refreshing this is to me, as a reader of urban fantasy and speculative fiction. Instead of having a lengthy history of the Kiss family line or be subjected to a universe history lesson, this information–about the Boys, the Wardens and Hunters, the demons–is gradually revealed, bit by tantalizing bit. The end result is a slow burning read that challenges, but trusts in its readers to be intelligent enough to come to these discoveries and inferences by themselves. For example, starting the book, Maxine talks about her family: mother, her, and the boys. But she also mentions she’s an only child, the lone daughter Kiss. Then, with a jolt we learn that the boys aren’t unseen pets or little brothers–they are demons that live and peel off the Hunter Kiss’s skin…and that by Maxine living and growing older, it is a death sentence for any mother Hunter, as the boys will eventually leave the mother for her daughter.

The intricate plot also had me breathless–this is the first full novel of a planned series, and the story packs a nice punch by providing some answers and yet leaving enough loose ends to keep readers hungry for more (I want to leave the plot specifics as bare-bones as possible, so as not to spoil the experience for anyone else). As most first installments go, The Iron Hunt gives us a good long look at Maxine and an introduction to many of the key players in her story. We meet her lover, Grant, who also possesses an important power of his own. There is the Meddling Man, Sarai, Blood Mama, Tracker, and the mysterious demon Oturu. And, of course, there are the Boys themselves–Zee, Aaz, Raw, Dek, and Mal. Of all the characters, we get to know Maxine the most intimately. As new players emerge and clues are shown to Maxine about her past and her family history, her thoughts depict the sharp edge of her loneliness. Her reactions to other characters–the benevolent old man who might be her grandfather, her memories of her mother and grandmother, her compassion and inability to go it solo as other Hunters have done before her–only emphasize this loneliness, and give Maxine color and depth as a character.

Beyond just the characters and the compelling plot, the world building in The Iron Hunt is superb–Ms. Liu manages to blend different cultures and mythologies into a concoction that is wholly her own. The most closely and explicitly linked myths, however, are that of Gilgamesh and the Labyrinth. When Maxine meets the enigmatic–and dangerous–Tracker, she learns his name is Enkidu. Though he is more slave than sidekick to his master, the character is a untamed, human, though ancient too. The Labyrinth also figures prominently into the story–Maxine’s journey and endless time wandering its passages mimics the hero’s journey of death and rebirth–banished to eternal dark and chased by an unseen force, Maxine makes her way through the labyrinth and the cold sweet tasting river there to return to her own world anew. There are also avatars–Gods made flesh–other worlds, unicorns and wolves. This wonderfully strange combination of myths and legends hooked me from the start, and has me eager for more.

Notable Quotes/Parts: I cannot do this book justice without commenting on Marjorie M. Liu’s writing. Her prose has been described as lyrical, poetic, and beautiful. All of these assessments are fair, in my own opinion. I loved the initially choppy and uncertain staccato of Maxine Kiss’s narration, melding later into flowing, coursing description and dialogue, haunting and wonderful at the same time.

She finally looked at me. She had never met my eyes. Her gaze was black as a shark, black as a doll, black as oil rich from rock, slick and hot, and the ageless intelligence of her gaze coated me in a miasma filled with such forebodings I could hardly think straight.

“I am an Avatar,” she whispered. “I am what rests beneath the skin.”

Additional Thoughts: Be forewarned, this is not a paranormal romance. There is little romance at all in the story, besides the implied deep trust and partnership Maxine has with her lover, Grant. I love the ease and quietness of this relationship–there is no sexual tension or petty misunderstanding between them; they know they are there for each other and do not question that. The character of Grant, and his role in this world and influence on Maxine–especially considering his powerful gift–is yet another part of the Hunter Kiss novels I cannot wait to read more of.

Verdict: Isn’t it obvious by now? I loved this book, and eagerly await the next installment. In the meantime, I’ll try some of Marjorie M. Liu’s other works.

Reading Next: “Thicker Than Blood” (in the First Blood anthology) by Meljean Brook

Over at Kirkus: Extinction Point by Paul Antony Jones