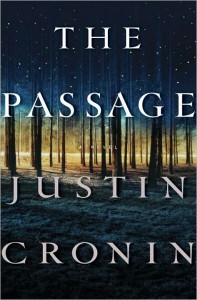 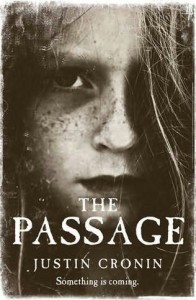 “It happened fast. Thirty-two minutes for one world to die, another to be born.”

First, the unthinkable: a security breach at a secret U.S. government facility unleashes the monstrous product of a chilling military experiment. Then, the unspeakable: a night of chaos and carnage gives way to sunrise on a nation, and ultimately a world, forever altered. All that remains for the stunned survivors is the long fight ahead and a future ruled by fear—of darkness, of death, of a fate far worse.

As civilization swiftly crumbles into a primal landscape of predators and prey, two people flee in search of sanctuary. FBI agent Brad Wolgast is a good man haunted by what he’s done in the line of duty. Six-year-old orphan Amy Harper Bellafonte is a refugee from the doomed scientific project that has triggered apocalypse. He is determined to protect her from the horror set loose by her captors. But for Amy, escaping the bloody fallout is only the beginning of a much longer odyssey—spanning miles and decades—towards the time and place where she must finish what should never have begun.

With The Passage, award-winning author Justin Cronin has written both a relentlessly suspenseful adventure and an epic chronicle of human endurance in the face of unprecedented catastrophe and unimaginable danger. Its inventive storytelling, masterful prose, and depth of human insight mark it as a crucial and transcendent work of modern fiction.

Why did I read this book: You don’t have to search hard to find some sort of promotional material for Justin Cronin’s The Passage – down the street from my apartment, there’s an honest to goodness billboard with an advertisement for the book. At BookExpo America, banners were strewn willy-nilly across the Javits Center, and even press/attendee badges bore advertisements for the book. The Passage has come so highly rated by literary types and genre fiction types alike (hi-yo, Stephen King endorsement!), and given the synopsis of the book (a world overrun by a deadly vampire-like plague, a struggling group of humans fighting for survival in a ravaged post-apocalyptic America, and a girl-that-is-not-a-girl who could save them all)…well, this is has my name all over it. Thea-crack.

When I have seen by Time’s fell hand defac’d
The rich proud cost of outworn buried age;
When sometime lofty towers I see down-raz’d,
And brass eternal slave to mortal rage;
When I have seen the kingdom of the shore,
And the firm soil win of the watery main,
Increasing store with loss, and loss with store;
When I have seen such interchange of state,
Or state itself confounded to decay;
Ruin hath taught me thus to ruminate
That Time will come and take my love away.

So begins the The Passage – with a fittingly eerie, portent ode to the end of the world. The book begins with the story of a teenage mother, Jeanette, and her beloved daughter whom she names Amy Harper – for Harper Lee, the author of Jeanette’s favorite book. Though Jeanette loves her daughter more than anything else in the world, she finds herself in an impossible situation, and is forced to give young, solemn Amy up, leaving her with a convent of nuns. Sister Lacey immediately feels a connection to Amy, understanding that there is something different, something important, about the six-year old girl, and takes her in, deflecting the questions of the other nuns in the convent. Meanwhile, Doctor Jonas Lear continues his top secret medical research, borne of a dream to find a miraculous cure for mankind’s ailments, under the jurisdiction and protection of the U.S. Army. FBI agent Brad Wolgast is sent to procure the subjects of Dr. Lear’s human trials, twelve deathrow inmates whom Wolgast persuades to sign their lives away. But Wolgast’s final mission has his conscience ill at ease as he and his partner are sent to pick up one final test subject; a six year old girl, abandoned by her prostitute mother. A girl named Amy.

Lear’s research, the twelve variations of the Project NOAH virus, are unleashed on the world in a single night as security is breached and each of the inexplicable, ravenous test subjects escape. Infecting and multiplying, the Virals sweep the North American continent from coast to coast in a wave of blood, horror and death, their only vulnerability exposure to daylight. The survivors – what few survivors remain – band together in isolated fortresses, armed with weapons and shielding their settlements with bright lights from dusk till dawn. But many decades later, when the power stutters and batteries begin to fail in First Colony, its only a matter of time before the lights go out and all is lost. But when a strange young girl with the ability to keep the Virals at bay arrives at the Colony walls, the fate of those precious few human survivors holds a glimmer of hope in a world of endless death.

Well, folks, it is with exuberant, unfaltering joy that I can say, this book is every bit as epic, as horrifying, as magnificent as promised.

From a world-building perspective, the tropes are instantly recognizable, familiar to the genre fiction fan. There’s nothing new about the premise of the book – an apocalypse, born of good intentions gone awry; a pandemic that converts the planet’s population into monsters, the remaining humans defenseless lambs to the slaughter. Justin Cronin’s take on the vampires myth is also somewhat familiar, his mutated “smokes” reminiscent of the recent film version of I Am Legend (not to be confused with Richard Matheson’s original envisioning), and Guillermo del Toror & Chuck Hogan’s more recent The Strain. To those skeptically reading this review, thinking to themselves that this is just another vampire book in a market oversaturated with supposedly “new” takes on vampire lore, what with their Bill Comptons, Edward Cullens, or even Kurt Barlows (for the horror afficionado), rest assured that The Passage is not just another vampire book. Rather (as remarked on Twitter earlier this week), The Passage is “just” another vampire book so much as The Road is “just” another post-apocalypse novel and Dawn of the Dead is “just” another zombie movie.

The Passage is the real deal. It is a book that not only lives up to the gargantuan hype, the impressive scale of its marketing machine, the carrot of its Ridley Scott movie deal – it surpasses expectation because it is just that damn good a story.

While on the one hand these genre tropes are safe and familiar, on the other it’s incredibly smart on author Justin Cronin’s part – these are classic premises for a reason, and Mr. Cronin embellishes his own mythology in just the right places. Instead of trying to reinvent the wheel, Mr. Cronin blends the familiar, imbued with his own particular take on apocalypse-by-monster. There are secrets and revelations enough to satisfy the scrutinizing apocalyptic aficionado (believe me, I’m one of the most discriminating of the bunch), but more than just worldbuilding or setting, the most impressive thing about The Passage is how effortless the storytelling is. Yes, it’s a doorstopper at 800 pages long – but it’s the best kind of doorstopper. Have you ever read a book that you didn’t want to end? A book that makes you feel the pang of regret, even as you race to the next page? Such is The Passage. The book is very much like Stephen King in its heft, but with one rather sizeable difference – in King’s books, there is a lot of, shall I say, excess. In The Passage, each page, each side-plot, each character history plays a vital, invaluable role in the book.

And I’ve yet to say anything of the characters! The cast of The Passage is large and varied, covering not only an array of human and infected, but across almost 100 years, as well. And for all that, each character is impeccably detailed; from the tragic Jeanette Bellafonte to the faithful Sister Lacey, the hardened Agent Wolgast to the heartbroken Dr. Lear, the self-doubting Peter, always in the shadow of his brother Theo, to the fiery Alicia. Each has their own distinct voice, their intricate and genuine histories, and I found myself profoundly caring for all of them – even the Virals themselves. Because, with the “monsters” and thematically, I think Mr. Cronin does with The Passage what so many dystopian and apocalyptic authors forget matters the most – he keeps hope alive in his story. Instead of villifying and labeling the vampires in his book as monotonously evil, bent only on blood and death, he shows them in a different light (which I won’t spoil for you, dear readers).

Finally, I do think that “the hype” must be formally addressed – especially for a book which has been pushed so much as The Passage. This is undeniably a genre fiction novel, brought to a mainstream audience – and I cannot express how overjoyed am I that an honest-to-goodness horror/post-apocalyptic mashup garnered such a huge marketing campaign and budget. Not to mention the movie option – seriously, throughout the book, I kept wondering, who is Russell Crowe gonna play? Heh. (I’m thinking Agent Wolgast, or a certain Army Major. Heck, why not Babcock? But therein lie spoilers, and I promise not to go there.) With the hype, however, comes the fear – I am a little nervous because this is not an easy blockbuster read such as, say, The DaVinci Code. I can see where reader opinion may vary and why the book’s intimidating length and large-scale approach to time and characters might lose readers – especially casual readers in our instant gratification era of teh internets – but I’m here to tell you that those naysayers? They miss the point. The Passage is a magnificent gift of a novel about the journey, not the answers (bear in mind, this is the first book of a trilogy). Beautifully written on an epic scale, it is a book that transcends genre.

The Passage is undoubtably the best book I have read in 2010. Absolutely recommended for anyone not scared to take on a book that shatters the mold of mass produced, predictable tripe that looks and reads like every other book on the market; for anyone that enjoys a truly Great read; for anyone that wants wants to be swept away in a torrent of flawless storytelling.

Notable Quotes/Parts: Using Random House’s “insight” widget, you can read the first 80 pages of The Passage below.

Additional Thoughts: As I mentioned above, the marketing campaign for this book is nothing short of impressive. For extras and downloads – everything from iPhone Apps to Twitter avatars and screensavers – check out the official book website HERE.

Once you’ve had your fun there, make sure to check out spinoff website Find Subject Zero (a tie-in blog) and enjoy the goodies, including videos, blog posts, tweets, and more. (I’m a huge sucker for these things, so I highly recommend you visit if you’re similarly inclined). For more content, check out Amazon’s Omnivoracious Page, where you can catch Justin Cronin’s podcasts about the book.

Rating: 9 – Damn Near Perfection; and I wait with bated breath for the next book in the trilogy.

Reading Next: The Magician’s Apprentice by Trudi Canavan

Decoding the Newbery: The Education of a King – Bridge to Terabithia by Katherine Paterson