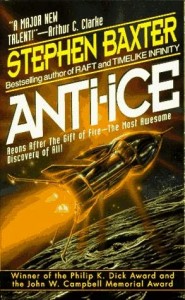 A new element has been found by millionaire industrialist Josiah Traveller – a mysterious substance that promises new wonders and threatens new horrors beyond humankind’s wildest dreams.

Discovered in a hidden vein near the South Pole, anti-ice is harmless until warmed, when it releases vast energies that can power land-striding ships larger than ocean liners…make travelt o the Moon a practical possibility…and arm demonic weapons that will make war – or life itself – obsolete!

For the maverick millionaire, this new substance means unlimited energy. For the young diplomat Ned Vicars, it means a chance for world peace. And for the beautiful double agent Fracoise, it means a besieged nation’s last hope of survival.

How did I get this book: Bought (it’s out of print, so Amazon Marketplace is the way to go!)

Why did I read this book: I discovered Stephen Baxter last year, and fell in love with his writing. This guy knows his science. His Ark was my single favorite read from 2009. And so, when I learned that he had written an honest to goodness steampunk novel (thanks to a comment from Kristen of Fantasy Cafe), I think I actually did a fist pump of triumph.

At the end of the eighteenth century, a comet has been captured by Earth’s gravity, and now remains in orbit of the planet – known as the “Little Moon.” Though it has not slammed into the Earth, it has rained meteorites, which have been lodged in the Antarctic. Enter Josiah Traveller: visionary, explorer, and genius. He has discovered a strange new element called “anti-ice,” buried beneath rock and ice in the Antarctic – the meteorites from Earth’s new Little Moon. This strange antimatter is capable of releasing extraordinary amounts of energy when heated even slightly – and the applications of this volatile, powerful new substance are seemingly limitless. Massive juggernaut vehicles can traverse the European continent – even the world – without need for refueling, and the moon itself is within man’s grasp! But, anti-ice also has more sinister, troubling applications in warfare, and some nasty political ramifications as well. Anti-Ice opens with a letter from a young man as he writes his father about his experiences in the Crimean War, culminating in the first (and last) use of an anti-ice bomb in combat. Now, some years later, Britain still holds the monopoly on anti-ice, but other nations are restless and frightened. Tensions are heating up between the Prussians and the French, with the British sitting on the most powerful weapon the world has ever seen.

Young Ned Vicars, reluctantly working as a diplomat in the British office at the behest of his father, is assigned to escort Otto Von Bismarck and his men as they attend the New Great Exhibition. It is here that Vicars meets the purported love of his life, the beautiful Frenchwoman Mademoiselle Francoise Michelet, and soon after, the reclusive genius Josiah Traveller. In his pursuit of Francoise days later, Vicars and his new-met journalist friend, one Mr. Holden, travel to the launch of the Prince Albert – an immensely large and revolutionary land-liner, able to travel the continent by virtue of anti-ice. By virtue of a series of unpredictable events, Vicars and Holden end up meeting with Traveller once again, and are invited to his private ship, the Phaeton, resting on the upper decks of the Albert – and it is here that the three men are trapped as someone sabotages the land-liner, and propels the Phaeton and her passengers into outer space, with no way to steer the ship, or method to return…

As you can see, Anti-Ice is a mishmash of genres, themes and characters. It blends the mannerisms of the Edwardian era with the stylistic appeal of authors like H.G. Wells and Jules Verne, tossed together with a fascinating alternate history and topped off with an irresistible dose of technical science fiction. It is steampunk, in that it is set in the appropriate time period and thus has the steampunk aesthetic, not to mention this newly discovered anti-ice plays a central role in technology, politics and story overall. As for the scientific aspect itself, Stephen Baxter is (per his usual) a visionary. Anti-Ice is an exploration stemming from the proposition – What would happen if an unparalleled, limited power-source was introduced to nineteenth century Europe? What if Jules Verne’s contraptions could actually be put into practice at the time of their conception? Anti-Ice answers these questions, examining the actual limitations facing 19th century technology in space travel, but more importantly, it also puts this technology into the context of this incredibly volatile time period. (And for someone that is both an astro-geek and a 20th century political history nerd, this is bonafide Thea-crack)

Comparatively speaking, Anti-Ice is “light” reading by Baxter standards. Which is actually an awesome side to his writing that I haven’t experienced before, and enjoyed immensely. There’s a ton of humor in this book – yes, laugh out loud humor! – which was a welcome surprise. I loved Ned Vicars’ first person narration and his thought processes. His infatuation with Francoise, his self-deprecating remarks (ironically underlain with his own vanity), it all was wonderful, winsome stuff. For example, his thoughts of Francoise (shortly after learning what a Dewar flask is – that is, a flask that has an insulating layer separated by a vacuum to protect against heat transfer):

And I – I only had eyes for Francoise. I watched the gentle curve of her back, the silent movements of her hands over her furled parasol, and I wondered fondly – if a little unscientifically – if, within the Dewar flask of her polite exterior, there might burn a flame of desire which I might kindle!

Or Ned’s observations of himself:

I saw myself through Francoise’s eyes: as a rather vain and shallow young man; one of thousands circlign the civilized capitals – although, I allowed, rather more charming and better looking than the average –

Or Ned’s tendency to blurt out hilarious (but effectually true) proclamations:

Fear sank deep into my thoughts. “You infer that we are in the hands of a saboteur?”

Holden said grimly, “I fear that a member of the same band of Prussians is at this moment at the controls of this craft.”

The full horror of our predicament at last broke over me. “We are trapped in this box, hurtling ever further from the Earth, and at the mercy of a crazed Prussian…Then we must gain access to the bridge at once!”

The outer suit opened at the front and I clambered awkwardly into it. The suit was fitted at the neck with a collar of copper just wide enough to admit my head. This collar was fitted to the inner rubber suit, forming an airtight seal; air was smoothed out of the interface between the outer and inner suits and the outer was sealed up by flaps and straps.

I raised my silvered, mittened hand. “I feel odd. Greased up and encased in this garment, with its mittens and booties, I am like some grotesque infant!”

It’s almost…Vorkosigan-esque. I had no idea Baxter could do stiff British comedy. Awesome.

While there are these light-hearted moments, however, there’s still an impressive amount of thought, research, and effort put into this book. The realities facing a crew of hopelessly unprepared astronauts, the Victorian modifications for space travel, it’s all fascinatingly well done.

But the most impressive thing in my opinion was the political metaphor of Anti-Ice. Despite being published in 1994, Mr. Baxter has written an eerily timely tale; the similarities between anti-ice and nuclear/WMD proliferation (and the West’s role in intervening/preempting) are unmistakable. The historical aspect is similarly impressive, detailing tensions between France, Prussia, and Britain and the strained discordance as the “Concert of Europe” (my favorite metaphor, though Baxter uses the ol’ “Balance of Power”) begins to fail. It’s all AWESOME. I loved it.

BUT IS IT STEAMPUNK?! Yes, it most certainly is. Not only is the technology the central pillar of the book, but the political ramifications (the “punk” part of “steampunk”) is here in abundance too. A different, fantastic application of the subgenre.

Notable Quotes/Parts: There are so many to choose from (as you might have seen above)! But how about this sort of easter egg aside for the reader:

There were chronometers, nanometers, Eigel Centigrade thermometers. There was a bank of compasses set in a three-dimensional array, so that their faces lay at all angles to each other. Traveller sighed over this arrangement. “I had hoped to use the direction of magnetic flux to navigate through space,” he said, “but I am disappointed to find that the effect fades away more than a few tens of miles from the surface of the Earth.”

“Instead you rely on a sextant,” I said, indicating a large, intricate brass device consisting of a tube mounted on a toothed wheel. “Surely,” I went on, “the Carthaginians themselves would have recognized such a device…but could never have imagined it in such a setting.”

“Carthaginians in space,” Traveller mused. “Now there is an idea for a romance…But, of course, one could never make such a tale plausible enough to convince the public. It would be even more controversial than Disraeli’s fashionable fable…”

Additional Thoughts: If The Time Ships is Baxter’s homage/continuation of H.G. Wells’ The Time Machine, then Anti-Ice is his homage to Jules Verne’s Around the Moon, From the Earth to the Moon, and The First Men in the Moon. 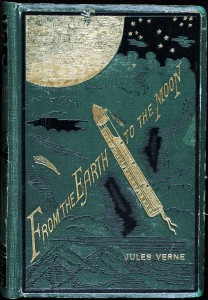 Written almost a century before the daring flights of the astronauts, Jules Verne’s prophetic novel of man’s race to the stars is a classic adventure tale enlivened by broad satire and scientific acumen.

When the members of the elite Baltimore Gun Club find themselves lacking any urgent assignments at the close of the Civil War, their president, Impey Barbicane, proposes that they build a gun big enough to launch a rocket to the moon. But when Barbicane’s adversary places a huge wager that the project will fail and a daring volunteer elevates the mission to a “manned” flight, one man’s dream turns into an international space race.

Verdict: A lighter, but still awesomely detailed and ridiculously good read. Anti-Ice has, once again, reaffirmed my love for the writing of Mr. Stephen Baxter.

Reading Next: The Alchemy of Stone by Ekaterina Sedia