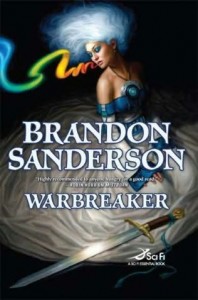 Summary: Warbreaker is the story of two sisters, who happen to be princesses, the God King one of them has to marry, the lesser god who doesn’t like his job, and the immortal who’s still trying to undo the mistakes he made hundreds of years ago.

Their world is one in which those who die in glory return as gods to live confined to a pantheon in Hallandren’s capital city and where a power known as BioChromatic magic is based on an essence known as breath that can only be collected one unit at a time from individual people.

By using breath and drawing upon the color in everyday objects, all manner of miracles and mischief can be accomplished. It will take considerable quantities of each to resolve all the challenges facing Vivenna and Siri, princesses of Idris; Susebron the God King; Lightsong, reluctant god of bravery, and mysterious Vasher, the Warbreaker.

Why did I read the book: The cover is an eye-catcher. Then I read only positive reviews online.

Warbreaker caught me by surprise and you can colour me amazed by this book.

The people from Idris and the people from Hallandren were once part of the same kingdom and shared the same beliefs in their God Austren. About 300 years ago there was a major conflict that split the kingdom in two with the Royal Family of Hallandren setting down in Idris and remaining faithful to the unseen God Austren and the people of Hallandren remaining behind and worshiping the Returned. The Returned are people who died heroically and return with immense power (more on that later) and are now the living and breathing Gods of Hallandren, ruled by a God King.

There is unrest in both kingdoms and the story starts as the King of Idris is about to send his daughter Vivenna to marry the God King and give him a heir with Royal Blood in an attempt to avoid a war. Vivenna has been groomed from childhood for her role as envoy to Hallandren. She has been taught politics and diplomacy and even though she is scared as hell at the prospect of living with these heretics and the abhorrent God King, she is prepared to do her duty.

To her surprise, her father changes his mind at the last second and fuelled by his preference for Vivenna, sends out the youngest, rebellious princess Siri to marry the God King. Catapulted into a situation she is not prepared for , Siri has to make do with the little she remembers from her lessons as she marries the God King. Terrified but resilient, Siri will do her best to fulfil her role whilst Vivenna for the first time ever, rebels and sets out on her own to save her sister.
Meanwhile within the palaces of the High Court of Hallandren, some of the Returned Gods feel the unrest and the whispers of war and some of them try to take a stance. Lightsong, the Bold , a self-proclaimed useless and indolent God of Bravery (and mockery) asks questions that no one wants to answer.

And then there is the mysterious Vasher working in the background doing his own thing.

With the narrative alternating between these 4 characters, Siri, Vivenna, Lightsong and Vasher, Brandon Sanderson weaves a plot that is complex and intriguing. Plus, a magic system that is unique, based on Colours and something called the Breath. Every person has at least one Breath and the more Breaths you have the more power you hold – over things for example. A person with a lot of Breath can call on these Breath and Awaken an object and Command it. The God King is a Returned that holds more Breath than any other living being. There is also a close relationship between Breath and Colour in which the more of the first the more you can affect the second and vice-versa.

For the Idrians, the use of Breath to Awaken things and even dead people (the Lifeless) is an abomination and for that, they avoid any colours and walk around in browns . The Hallandrens are a specially colourful people and Hallandren is immersed in bright, vibrant colours. (It is really interesting to see the two sisters’ opposite reactions to Hallandren and its colours for example: with Siri embracing it and Vivenna wholly detesting it. )

The magic system is tightly woven into the characterisation and plotting and all points are extremely well-balanced. From the intricate politics to the character, everything works in Warbreaker.
I particularly enjoyed reading about Siri and Vivenna –at opposite ends of the spectrum both in personality and in pathways. Siri begins the book redundant ,useless, unimportant and Vienna being the most important sister. As the roles invert Vivenna is the one who BECOMES redundant, useless, unimportant and Siri with a role that may well hold the future of both kingdoms in her hands. Their journey and questioning strongly affect the fate of their people – be them the Idrians or the Hallandrens.

In fact , this “identity” issue is, what I see to be the most important “theme” of the book. Not only do Siri and Vivenna have to question themselves, their place in their world and ultimately, their beliefs ; but also, Lightsong the God, doesn’t believe in his own deification and has revealing conversations with his High Priest on the subject of faith and worshiping – the fact that he doesn’t see himself as a God and spends his life trying to prove people wrong to ultimately finding out the truth (and the truth is awesome by the way) about the Gods in Hallandren; Vasher has a mysterious identity himself AND the God King may not be what everybody thinks he is.

At the centre of it all though rests Hallendren and as each of the characters reaches a resolution the Kingdom itself and its beliefs are put to test. I watched an interview with Brandon Sanderson in which he talks about a common trope in the Fantasy genre: the “Rebellion against the Empire” when all characters are fighting and going to war to defeat a common threat and how he tried to make just the opposite here: to make the established government work, to make it better. And I think he succeeds beautifully in what he set out to do.
Warbreaker, for this reason is not full of action but it has heart and it has an abundance of humour as well. Lightsong’s tirades are a pleasure to read for example.

The book does lag a little bit in the middle, though. I think it is a tad too long and some things are repeated ad nauseam : Vivenna’s observations of Hallandren’s life and her dislike for it (and for fish. I GET IT ALREADY: She hates fish) . I read the first chapters quite quickly, but it took me quite a few days to get through about 100 pages in the middle but then things pick up again and it was a great journey to the end and the awesome climax.

I would be remiss if I didn’t mention the cover – the reason why I wanted the book in the first place. It is not only beautiful but also confirming to what’s inside: it depicts Breath and the woman in the cover IS Siri. It is another one by Dan dos Santos and in my opinion, a work of art in itself.

Despite my minor grippes, with its unique magic system, compelling characters, a sweet romance and intricate plot, Warbreaker is indeed a most excellent book.

Notable Quotes/ Parts: the interactions between Siri and the God King. And of course, the climax of the book!

Additional Thoughts: This interview with the author is really interesting:

Reading Next: Written on Your Skin by Meredith Duran

Book Review: Shadows on the Moon by Zoë Marriott