Title: The Knights of the Cornerstone 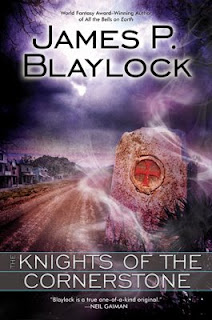 Why did I read this book: We received a copy of this one from the publisher, and I when I read the premise coupled with the Neil Gaiman author blurb on the cover, my interest was piqued.

Summary: (from amazon.com)
Calvin Bryson has hidden himself away from the world, losing himself in his work and his collection of rare and quirky books. He never meant to let so much time go by without visiting his aunt and uncle in the tiny town of New Cyprus, California. When he gets there, he’ll discover the town’s strange secrets and a mysterious group dedicated to preserving and protecting holy relics—a modernday incarnation of the legendary Knights Templar…

Cal Bryson is a thirty-some year old man who lives a sheltered, safe life in the Valley after a crappy breakup with his long-time fiancee. Surrounding himself with books and his cartoon sketches, Cal shuts himself off from the rest of the world, content to spend his days in solitude. That is, until one afternoon when he receives a phone call out of the blue from his cousin Hosmer and Uncle Lymon. A package is delivered to Cal from Hosmer, supposedly containing the haunted veil of a long deceased relative, and Cal is asked to drive the package out to New Cyprus and hand it over to Uncle Lymon. A sucker for the bizarre (and a good story), Cal agrees to drive out to New Cyprus with the veil, though he wonders that cousin Hosmer didn’t just send the thing to Lymon in the first place. When he’s just a few miles out from the secluded desert town at the juncture of California, Nevada and Arizona, Cal is confronted by a strange man who has a vested interest in New Cyprus, and the Knights of the Cornerstone–the organization that runs the unincorporated town. During Cal’s stay in New Cyprus many strange things happen, and he learns that the Knights are more than they first appear, and that magic and adventure really do exist.

James P. Blaylock is perhaps best known for his Philip K. Dick Award winning steampunk novel, Homunculus, but this new release marked my first encounter with the author. The Knights of the Cornerstone is a strange, quirky fantasy novel, and one I enjoyed. In many ways, I can see why Neil Gaiman would be a fan of Mr. Blaylock’s work–there’s a certain kinship to their writing styles. Both authors employ magical realism in their novels; that is, a writing style in which fantastic events occur in a real world or mundane setting. Cal, the protagonist of The Knights of the Cornerstone, strangely enough reminds me of a more lighthearted Shadow from Gaiman’s American Gods. In Gaiman’s novel, little is really known about Shadow–not even much of what he looks like–and for the most part, Shadow is content to drift along with the much larger events that surround him. Cal Bryson is much the same–very passive and content to be led by the opinions and actions of other characters, reacting to events as they occur instead of actively seeking out the Knights, or magic, or danger of any sort. In a passage with his Uncle Al Lymon, this sums up Cal perfectly:

“Seems to me some people live alone because it’s easier to be apart than to be a part of something,” he said. “You take my meaning?”

“I thought you did. You like doing for yourself. That’s a very independent state of mind, and that’s okay so far as it goes. It just doesn’t go very far. You’ve got your books and whatnot, your folks’ house out there in Eagle Rock. You can while away the days till kingdom come, and you’ll never have to get up in the middle of the night to get the person you love a glass of water. And there won’t be anyone to fetch a glass of water for you, either.” He sat in silence for a moment, and then said, “I apologize for horning in, but I owe it to your dad to ask you what you think you’re doing, burying your talents under a bushel like this. So Elaine wasn’t the one. All that means is that the one is still out there…I told you I was going to Dutch uncle you, and now I’m doing it. What I mean to say is that living apart can be like slow poison. Drunks and dope addicts and zealots live apart, even when they’re married. Everything else is secondary to the drink and the dope or whatever else they can’t live without. And the longer they live apart, the more they want to stay that way. When you live outside the fold, you can let your own shortcomings roll right along, like a snowball. It’s restful for a time, but then one day that snowball will bury you, and you won’t see it ccming, because you’ve lost sight of who you used to be.”

“Sermon’s over,” his uncle said. “Sorry it sounded like one. Some kind of fit came on me. You’re free to tell me to mind my own business.”

“I appreciate your concern,” Calvin said, the ready-made phrase sounding as hollow as a Ping-Pong ball.

The book focuses on a small community, run by the titled Knights of the Cornerstone, under the leadership of Cal’s Uncle. From Cal’s early perceptions and reactions to the Knights, I was put in the mind of the Grand PooBah of the Loyal Order of Water Buffaloes from The Flintstones. But, with strange inexplicable event after strange inexplicable event, Cal discovers that the Knights in fact are descendants of the Knights Templar, and serve to protect very important, magical artifacts.

When I say “magical”–for the story does deal with magic–it’s almost misleading. Just as Cal is unassuming and understated as a character, so too is the magic in this book. There is nothing sensational, no grand flourishes or dragons or sizzling magical thunderbolts on the mountaintop to The Knights of the Cornerstone. Much like the easy-going townfolk of New Cyprus on the rolling bank of the Colorado River, The Knights of the Cornerstone is a subdued, laid-back literary work. There is a fair share of action and intrigue as a warring order under the leadership of Bob Postam make a move to steal the Veil and seize control of New Cyprus, but the tempo of the book is incredibly leisurely. Almost too leisurely for my tastes. The plot and action does not pick up until the last third of the novel, instead expending most of its energies on Cal’s thoughts and encounters with the characters of New Cyprus. Which is to say that the book’s strengths lie completely in its realistic characters and setting, and in Mr. Blaylock’s beautiful prose, but not so much in terms of plot development.

The other characters in this novel–including the strange town of New Cyprus itself–are wonderfully detailed and tangible. And bizarre, let’s not forget bizarre. As with many small towns in literature and film, the inhabitants of New Cyprus seem to know everyone’s business (when Cal starts showing interest in Donna–or vice versa–everyone in the town starts calling her ‘Cal’s girl’, etc.), and are all a tad eccentric. But they take care of their own, and Cal is immediately embraced as family (as Al Lymon’s nephew). His interactions with all the townfolk and the Knights were my favorite parts of this book, especially those with Uncle Al and his cancer-ridden wife Aunt Nettie. For all that The Knights of the Cornerstone is about this alternate history of the Knights Templar, in truth it’s not about the magical or fantastical elements at all. It is about family and relationships, and most importantly about Cal reacting to the scenario he finds himself embroiled in, finally choosing to act and take a direction with his life.

Overall I enjoyed this novel, especially for its clean, crisp writing, its multifaceted characters, and their witty banter. I’m torn, however, in assigning a rating. While I loved these aspects of the book, the slow pacing and almost afterthought-like plotting never managed to hook me. Over halfway through the story, I still felt like I was waiting for the book to really begin. Still, I enjoyed The Knights of the Cornerstone and would be willing to give Mr. Blaylock’s other books a try.

Notable Quotes/Parts: Something we can all relate to:

He parted the blinds and looked out again. It was a UPS driver at the door. Books! Calvin thought, his spirits lifting, but when he opened the door and took the box from the driver it was far too light to be books.

“I sense a Nickelodeon fan here. In fact, is that a tiki around your neck?”

“Yeah,” Calvin said. “I used to collect them. This one’s carved out of an old beef bone and dyed with coffee.” He took the tiki out from under his shirt and showed it to her–a tiny, stretched-out head with a long nose and goggle eyes. “There’s serious mojo in these, but only if you’re a believer.”

“I still have my troll dolls,” she said.

“Then you know what I’m talking about. Give me that old-time religion.”

And a real passage this time, showing the burgeoning romance between Cal and Donna:

He stuck the base of his champagne glass under the river sand and picked up his book bag. “I brought some cartoons,” he said. “I thought maybe I’d show you a couple. I mean, they’re maybe not all that funny, but…”

“That’s what I’m doing. What I’m telling you is that we’re done with Elaine. She just got written out of the script. Is that all right with you?”

“Then show me one of your cartoons, and I’ll tell you whether it’s funny or not, and if I say it’s funny, then it’s funny. And quit looking like you’re going to faint.”

“I’m not going to faint,” he said, staring at her. She actually looked angry. If he had a chance to draw the cartoon, it would be a picture of both of them wearing leopard-skin garments. She’d be wearing the Pippi braids and carrying a club, dragging him off toward a cave, and he’d have a lump on his head. Over the cave door it would read “Vena Vena Cava.” It would be a heart-shaped door. He started laughing.

“Nothing. I can’t tell you.” He laughed again.

Verdict: A very strange but solid book, full of quirky, intriguing characters. I liked it even if it did move too slowly for my tastes, and would be willing to try out other titles from this author.

Over at Kirkus: A Stranger in Olondria by Sofia Samatar

Over at Kirkus: Redshirts by John Scalzi