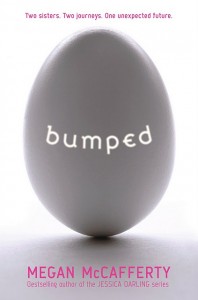 When a virus makes everyone over the age of eighteen infertile, would-be parents pay teen girls to conceive and give birth to their children, making teens the most prized members of society. Girls sport fake baby bumps and the school cafeteria stocks folic-acid-infused food.

Sixteen-year-old identical twins Melody and Harmony were separated at birth and have never met until the day Harmony shows up on Melody’s doorstep. Up to now, the twins have followed completely opposite paths. Melody has scored an enviable conception contract with a couple called the Jaydens. While they are searching for the perfect partner for Melody to bump with, she is fighting her attraction to her best friend, Zen, who is way too short for the job.

Harmony has spent her whole life in Goodside, a religious community, preparing to be a wife and mother. She believes her calling is to convince Melody that pregging for profit is a sin. But Harmony has secrets of her own that she is running from.

When Melody is finally matched with the world-famous, genetically flawless Jondoe, both girls’ lives are changed forever. A case of mistaken identity takes them on a journey neither could have ever imagined, one that makes Melody and Harmony realize they have so much more than just DNA in common.

Why did I read this book: Yes, it’s another dystopian title (and you know how much I love dystopias). Despite the fact that many of the new wave of YA dystopias tend to, well…suck, I was eager to give Bumped a chance because the premise is so intriguing. Plus, the fact that Bumped is also a satirical title with aspirations of turning our fascination with teen pregnancy on its head made the book even more appealing to me.

Picture a world where the window of human fertility is confined to a handful of years; where teens, tweens, and pre-teens are encouraged by all aspects of society to “bump” as soon as they can. In this future world, the most healthy, intelligent and attractive girls (and boys) are recruited at increasingly younger ages by pharma and reproductive companies. Bound by contracts, paid in luxurious perks and given six figure advances for their offspring, these children are raised with one core, unshakable value – that bumping is the most important, rewarding, and cool thing they can do.

Adopted by a pair of enterprising professors, Melody has been raised as the perfect biological specimen for breeding – top-ranked in intelligence, athleticism, attractiveness quotient, Melody becomes one of the first girls to make “going pro” (getting recruited by top agencies and signing a huge contract with an eager couple for a hefty advance) cool. All that Melody needs to fulfill her contract is a suitable mate to match her level of genetic desirability. But, after years of waiting while her agent tries to negotiate a quality stud approved by the purchasing couple, Melody finds herself at sixteen one of the very few girls that has yet to have her first bump.

Enter Harmony, Melody’s identical twin sister. While Melody was adopted by an affluent, ambitious family, Harmony was taken in by a small, isolated religious commune called Goodside. When Harmony discovers that she has a missing twin, she immediately leaves Goodside to find her wayward sister – because while Melody’s ambition may be to become the best pro pregger around, Harmony sees it as her mission to spread the word of God (i.e. getting married and having babies monogamously, as soon as possible). Though they share the same DNA (and the same musically cheesy names), Melody and Harmony could not be more different. Try as Harmony might, she cannot find a way to bond with her sister; try as Melody might, she can’t find a way to get rid of the religious nutjob with her face that may just screw up her only chance at a secure, successful future. When Melody’s ideal match comes through, however, the twins will be tested in different ways – and might just discover some common ground, after all.

Bumped is unlike any book I’ve read this year. It is absurdist, satiricial and, unlike Libba Bray’s novel (which we discussed last week), Bumped actually works. Ms. McCafferty’s newest YA novel provokes and invites readers to think not only about hot-button issues such as abstinence, abortion, and teen pregnancy, but the role of government, education, and religion in modern society. Taking a page from the bleak gender roles and reproductive fates illustrated in Margaret Atwood’s The Handmaid’s Tale, the hyper-consumerist society of M.T. Anderson’s Feed and the futuristic colloquialisms of teens in Scott Westerfeld’s Uglies series, Bumped walks the fine line between the serious and the absurd. The book manages to point out different facets of society by manner of hyperbole, the most immediate of which compares religious fervor to capitalistic crassness through dual protagonists. Initially unyielding in their beliefs, as the story continues the sisters grow closer and are forced to examine their place in the world and their own desires. As each character grows, their surety in their beliefs begins to change. Harmony’s faith may remain unshaken, but her trust in the elders of her church and those who have forced her into different roles, far before she was willing or ready, is questioned. Melody, who has spent her entire life being honed as a perfect vessel by her parents, her agent, and her friends, also undergoes her own gradual awareness process. The juxtaposition of these two different character arcs is expertly handled – the beauty of Bumped is that I never ever felt preached at, or as though the author was trying to make an argument for one interpretation/sister over another. Rather, Ms. McCafferty is like some wise, mad scientist, introducing different complications and concepts and trusting in her audience to draw their own conclusions.

So far as basic mechanics go, the story itself is a quick, engrossing and manically funny (if horrific at times) read. In addition to packing a thematic punch, Ms. McCafferty is also an expert storyteller, framing the heavy issues with humor. The world in Bumped is *almost* completely believable (the only questionable aspect being that scientists had not discovered a way to create test tube babies, clones, or other artificially insemination techniques). One common complaint I’ve seen for Bumped lies with the slang used (with no explanation), especially in the early chapters of the book. Personally, I loved the colloquialisms unique to this world, just as I loved the fact that the author did not feel the need to info-dump, hand-hold, or otherwise point-blank explain the terminology (which wouldn’t make any sense as all the characters in this book grew up with these phrases). That said, I can understand the frustration, especially as the book is written in short, point of view alternating chapters.

Overall, I found Bumped to be a satire with both wit, heart, and insightful commentary regarding America’s fascination with teenage sex and pregnancy. Absolutely recommended.

Notable Quotes/Parts: Thanks to Harper Collins’s Browse Inside feature, you can read the first 100 pages of Bumped! Check out the widget below (or if you can’t access the widget, go forth to the official page here).

Reading Next: The Map of Time by Félix J. Palma