IT’S BACK! The Dare is back!

Years ago, we had a regular feature called The Dare (and its sibling, the Guest Dare) in which we dared each other to read books outside of our comfort zone. For no real reason, we stopped doing those until we decided to bring it back this year. So without further ado: The Dare 2.0.

Today, the dare is a little bit different. This time, in a true testament of strength, we’ve both agreed to review a category completely outside of our comfort zones: nonfiction. Thea takes on Brain on Fire by Susannah Cahalan (a memoir/medical thriller about a young journalist recounting the months of illness and diagnosis of a rare autoimmune disorder). Tomorrow, Ana will post her Dare, Gossip of the Forest by Sara Maitland (about the intertwined relationship between fairy tales and actual forests). Wish us luck! 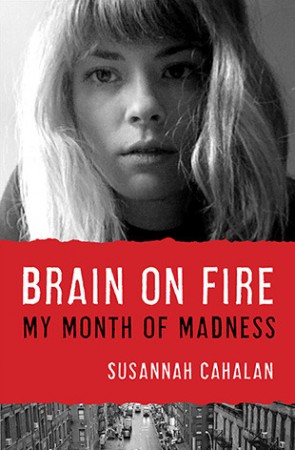 A gripping memoir and medical suspense story about a young New York Post reporter’s struggle with a rare and terrifying disease, opening a new window into the fascinating world of brain science.

One day, Susannah Cahalan woke up in a strange hospital room, strapped to her bed, under guard, and unable to move or speak. Her medical records—from a month-long hospital stay of which she had no memory—showed psychosis, violence, and dangerous instability. Yet, only weeks earlier she had been a healthy, ambitious twenty-four year old, six months into her first serious relationship and a sparkling career as a cub reporter.

Susannah’s astonishing memoir chronicles the swift path of her illness and the lucky, last-minute intervention led by one of the few doctors capable of saving her life. As weeks ticked by and Susannah moved inexplicably from violence to catatonia, $1 million worth of blood tests and brain scans revealed nothing. The exhausted doctors were ready to commit her to the psychiatric ward, in effect condemning her to a lifetime of institutions, or death, until Dr. Souhel Najjar—nicknamed Dr. House—joined her team. He asked Susannah to draw one simple sketch, which became key to diagnosing her with a newly discovered autoimmune disease in which her body was attacking her brain, an illness now thought to be the cause of “demonic possessions” throughout history.

With sharp reporting drawn from hospital records, scientific research, and interviews with doctors and family, Brain on Fire is a crackling mystery and an unflinching, gripping personal story that marks the debut of an extraordinary writer.

Why the Dare: I have a secret fascination with certain types of nonfiction books – particularly intriguing biographies and memoirs. In the case of Brain on Fire, I had heard rave reviews from all the professional review sources, I’d heard about the book on television news outlets and on NPR. My interest in the book was piqued by the premise (mystery diagnosis, real life Doctor House minus the drug problem, etc) – and when I learned that Cahalan’s mystery diagnosis could have been the same disease responsible for people thought history supposedly suffering from demonic possession, I knew I had to read this memoir.

At twenty-four years old, Susannah Cahalan’s life is trending upward. She has paid her dues as an intern and beat writer for the New York Post, and her career as an incisive young reporter is just starting to take off. She has a loving family, and she’s six months into her first serious relationship (I love yous are exchanged).

That promising career and budding romance, however, all comes crashing down over the course of a few short weeks, when Susannah’s health and mental state rapidly deteriorate. A former straight-A student, and a highly intelligent and emotionally stable young woman, Susannah suffers from increasingly acute paranoia and psychosis, followed by seizures, uncontrollable physical tics, and eventual catatonia. The doctors are baffled as her tests come back normal and negative for all known illnesses with her symptoms and Susannah’s diagnosis remains a mystery as doctors rule out a wide arc of potential ailments. Her diagnosis shifts from alcoholic withdrawals, to psychological illness (bipolar disorder, schizophrenia), to epilepsy, meningitis, herpes, hepatitis, and cancer – all to no avail. Finally, after a long month of hospitalization, Doctor Souhel Najjar – a renowned specialist in mystery diagnoses, earning him the title of the Real-life House MD – solves the case, and Susannah’s elusive illness (an extremely rare autoimmune disease) is finally diagnosed and treated.

Brain on Fire is the news story of Susannah Cahalan’s career – in this investigative journalistic memoir, she reconstructs the days leading up to her illness (paranoia over imagined bedbug bites, intense mood swings, increasing mania and delusions) to the missing month of her hospitalization and diagnosis, and the recovery period thereafter. Susannah’s recounting is all the more remarkable, as she has pieced together this account from the memories, notes, and recordings of others – Susannah herself has no recollection of the weeks she spent in NYU’s epilepsy wing, although she has copious notes, witnesses, and video of that period of time.

It’s a hard thing to review nonfiction, especially an autobiographical memoir. How do you criticize the work without being judgmental and criticizing someone’s life? I will do my best to walk this very fine line, and apologize in advance for my ineptitude in this particular genre. What I will say is this: I found the overall story behind Susannah’s illness and diagnosis fascinating, and I love Cahalan’s journalistic skill as she pieces together the fragments of her past to form a cohesive story. That said, while the book starts out fairly strong, it quickly loses steam after Susannah is diagnosed (about halfway through the narrative). Instead of focusing on those clues and the investigative story of Susannah’s missing month of memory, Brain on Fire focuses, oddly, on the minutia of Susannah’s family and friends – there are lots of car rides and teary embraces, recountings of walks, spin class, and so on. The momentum of the book is off-kilter, especially the later parts of Cahalan’s story following diagnosis, as the book peters out in a needlessly protracted denouement.

Pacing issues aside, I have one other major problem with Cahalan’s memoir: the treatment of mental illness.

Susannah is repeatedly described as a capable, smart, vivacious young woman. One who has always played by the rules, who is considered, kind, and intelligent, who would never crack under stress. When doctors initially ascribe her illness to a psychological cause, her parents are vehemently opposed to the possibility that Susannah could suffer from mental illness. Susannah herself is vehemently opposed to this, by the very nature of writing this in her memoir.

“Well, Susannah’s insisting that she’s manic-depressive. Do you think that’s a possibility?”

James thought on this for a moment. “No. Not in the least. That’s just not Susannah. Sure, she can be excitable and temperamental, but she’s not depressive. She’s tough, Mom. We all know that. She deals with a lot of stress, but she handles it better than anyone I know. Bipolar doesn’t make any sense to me.”

My mother smiled for the first time in weeks. It was a strange relief for her to finally have confirmation that something physical, as opposed to emotional, was happening to me.

Later in the book, after Susannah is diagnosed and treated, Cahalan writes that her father leaves a note to the epilepsy ward staff at NYU, saying:

Susannah is a wonderful young woman who deserved your hard work.

All of this in combination is deeply, intensely problematic. The implication of these different statements and tone throughout the book is that mental illness is something that only weak people suffer from; that Susannah – beautiful, smart, middle class Susannah – couldn’t possibly have a psychological illness. Worse, that last note from Susannah’s father implies that there are those out there (e.g. mentally ill patients without “real” physiological diseases) who do not deserve the hard work of doctors. Mental illness is real and it affects millions of individuals in the United States alone – it is not a function of weakness, and those afflicted with mental illness are not in any way lesser than those afflicted with physiological illness.

Furthermore, Brain on Fire is the story of a very privileged young woman in the United States (blonde, blue-eyed, white, from the well-off suburbs with two parents that love and stand by her side through her entire ordeal). One can’t help but think, what about the other people who suffer from Susannah’s extremely rare disorder? What about those without health insurance, or the support system of Cahalan’s family, or who don’t have access to this type of medical attention? I wish Cahalan had – even tangentially – examined these issues.

Ultimately, Brain on Fire has promise, but leaves much to be desired. This book is a miss, for me.

Notable Quotes/Parts: From the excerpt:

I don’t remember how I got home after the interview or how I filled the hours in the wake of yet another professional debacle, but after still another sleepless night—it had now been over a week since I’d slept fully—I headed to the office. It was a gorgeous early March morning, the sun was out, and the temperature was a crisp thirty degrees. I had walked through Times Square twice a day for six months, but today, once I hit the rows of billboards at its center I was accosted by its garish colors. I tried to look away, to shield myself from shock waves of pigment, but I couldn’t. The bright blue wedge of an Eclipse gum sign emitted electric swirls of aqua and made the hair on the back of my neck stand up. I could feel the colors vibrating in my toes. There seemed to be something exquisite about that rush; it was simultaneously enervating and thrilling. But the thrill lasted only a moment when, to my left, the moving scroll of “Welcomes you to Times Square” caught my attention and made me want to retch in the middle of the street. M&M’s on an animated billboard to my left pirouetted before me, forging a massive migraine in my temples. Helpless in the face of this onslaught, I covered my eyes with mittenless hands, stumbling up Forty-Eighth Street as if I had just gotten off a death-defying roller coaster, until I hit the newsroom, where the lights still felt bright but less aggressive.

“Angela, I have to tell you something strange,” I whispered, concerned that people might be listening in, thinking I was crazy. “I see bright colors. The colors hurt my eyes.”

“What do you mean?” she asked, worry evident in her smile. Every day my behavior had been growing increasingly erratic. But it wasn’t until this morning that my ramblings had begun to frighten her.

“Times Square. The colors, the billboards: they’re so bright. Brighter than I’ve ever seen them before.”

“You must be really hung over.” She laughed nervously.

Rating: 5 – Meh, strong early high notes are diluted with a weak finish; this, plus, the overall uncomfortable messaging (regarding mental illness) equals ambivalence