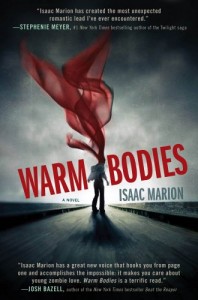 R is a young man with an existential crisis–he is a zombie. He shuffles through an America destroyed by war, social collapse, and the mindless hunger of his undead comrades, but he craves something more than blood and brains. He can speak just a few grunted syllables, but his inner life is deep, full of wonder and longing. He has no memories, noidentity, and no pulse, but he has dreams.

After experiencing a teenage boy’s memories while consuming his brain, R makes an unexpected choice that begins a tense, awkward, and strangely sweet relationship with the victim’s human girlfriend. Julie is a blast of color in the otherwise dreary and gray landscape that surrounds R. His decision to protect her will transform not only R, but his fellow Dead, and perhaps their whole lifeless world.

Scary, funny, and surprisingly poignant, Warm Bodies is about being alive, being dead, and the blurry line in between.

Why did I read this book: I first heard about Warm Bodies after reading Angie’s review (as always, the review was fantastic and made me want to buy the book). Immediately, I was hooked – not only by the gorgeous cover, but by the idea of a plausible romance…from the zombie perspective.

The world has ended. Nations have fallen. The living are forced to huddle together in isolated pockets while the undead roam the gutted ruins of civilization. In the midst of this hopelessness and endless future of bleak lassitude, one zombie stands apart from his fellow undead. Unable to remember his name, other than the fact that it starts with Rrrr, this young zombie knows nothing about the man he once was. He’s wearing slacks, a button-up, and a silk red tie, so he might have been some kind of professional or aspiring temp worker. He can remember snippets of life, but nothing can fully penetrate the fog of his undead memory. But one thing “R.” knows is that he’s a little different from the others around him. Though speech is hard, R. has no limit to the eloquence of his mind – he laments the loss of humanity and feels intense guilt for the fact that he has to consume the living. But consume he must, because it is only in that consummation does R. catch flashes of emotion, glimpses of feeling; fleeting moments of color and life.

On his latest hunting trip, R. and his fellow zombies find an enclave of humans and proceed with business as usual – but as R. bites into one unfortunate man’s brain tissue, he experiences life more vividly than anything he’s ever seen it before. Reliving some of the young man’s – Perry’s – scattered memories, R. sees a beautiful blonde girl named Julie, and feels Perry’s blush of first love. That same girl, now a young woman, is in the present with R., about to meet the same grisly fate as the rest of the small human group. For the first time, R. feels a need stronger than that for meat and cannot overlook the pangs of his conscience. He makes a choice; to protect Julie. As R. takes Julie back to his ‘home,’ the two talk and learn from each other, and life will never be the same for human and zombie alike.

Together, R. and Julie will change the world.

When I started Warm Bodies, I had high hopes (tempered with caution, because there’s that cynic in me that always wants to butt her ugly head in and derail the fun). But HOLY. FREAKING. CRAP. I loved this book.

Allow me to repeat: I loved this book. I instantly fell in love with R., for his quiet observance, his eloquence, and his will to live (as strange as that may sound). I loved the unconventional love story, the emotional resonance of R. trapped within his rotting body, and the interplay between Perry’s memories and R.’s reality. When I first read the release for this book, I was a little wary because the pitch basically was “Romeo and Juliet! This is EDWARD CULLEN for ZOMBIES!” Eww. No. No no no. It’s not. This is a serious book; it is a poignant story that deserves to be taken seriously. It’s a love story that isn’t gross or hokey (though it easily could have been), that follows a boy that loves a girl and decides to follow her against all odds. I mean, how could you not fall in love with this:

I don’t know what I’m doing, how I’m doing it, or what will happen when it’s done, but at the verry bottom of this rising siege ladder, I at least know I’m going to see Julie again. I know I’m not going to say good-bye. And if these staggering refugees want to help, if they think they see something bigger here than a boy chasing a girl, then they can help, and we’ll see what happens when we say yes while this rigor mortis world screams no.

It is R.’s internal narrative, in his keen yet strange observations, that set the tone of this book and pulls at readers’ heartstrings. And, it is Julie’s brightness and her vividness as a flame of life and hope against an impossibly dreary world that attracts and keep these two unlikely characters together.

From a storytelling perspective, debut novelist Isaac Marion does a fine job of pacing this book, balancing bleak and gritty with hope and love. I loved this imagining of zombies as cognizant beings, with their own society and process of consciousness, as I loved the differentiation between “boneys” and the fleshier, newer zombies like R. or his friend M. Although I do think that the book stumbles in its last act, breaking that careful balancing act between hokey and earnest and tips towards the former with a rather heavy-handed Big Message (i.e. humanity did this to THEMSELVES!), the rest of the novel is so strong that this is forgivable. After all, as Stephen King says, it’s about the journey, not the destination. Right?

I loved this book, truly, madly, deeply. Warm Bodies is one of the most surprising zombie novels I’ve ever read, and easily on the shortlist for one of my favorite books of 2011.

AM DEAD, but it’s not so bad. I’ve learned to live with it. I’m sorry I can’t properly introduce myself, but I don’t have a name anymore. Hardly any of us do. We lose them like car keys, forget them like anniversaries. Mine might have started with an “R,” but that’s all I have now. It’s funny because back when I was alive, I was always forgetting other people’s names. My friend “M” says the irony of being a zombie is that everything is funny, but you can’t smile, because your lips have rotted off.

None of us are particularly attractive, but death has been kinder to me than some. I’m still in the early stages of decay. Just the gray skin, the unpleasant smell, the dark circles under my eyes. I could almost pass for a Living man in need of a vacation. Before I became a zombie I must have been a businessman, a banker or broker or some young temp learning the ropes, because I’m wearing fairly nice clothes. Black slacks, gray shirt, red tie. M makes fun of me sometimes. He points at my tie and tries to laugh, a choked, gurgling rumble deep in his gut. His clothes are holey jeans and a plain white T-shirt. The shirt is looking pretty macabre by now. He should have picked a darker color.

We like to joke and speculate about our clothes, since these final fashion choices are the only indication of who we were before we became no one. Some are less obvious than mine: shorts and a sweater, skirt and a blouse. So we make random guesses.

You were a waitress. You were a student. Ring any bells?

No one I know has any specific memories. Just a vague, vestigial knowledge of a world long gone. Faint impressions of past lives that linger like phantom limbs. We recognize civilization—buildings, cars, a general overview—but we have no personal role in it. No history. We are just here. We do what we do, time passes, and no one asks questions. But like I’ve said, it’s not so bad. We may appear mindless, but we aren’t. The rusty cogs of cogency still spin, just geared down and down till the outer motion is barely visible. We grunt and groan, we shrug and nod, and sometimes a few words slip out. It’s not that different from before.

But it does make me sad that we’ve forgotten our names. Out of everything, this seems to me the most tragic. I miss my own and I mourn for everyone else’s, because I’d like to love them, but I don’t know who they are.

Additional Thoughts: Apparently, a movie is in the works for Warm Bodies, although it is being pitched as a zombie romantic comedy – which makes me a leeeetle bit crazy. (How is this book a romantic comedy!? Huh?) But, at the same time, I am always happy to see film adaptations of books, if only because this will get people to hopefully pick up the original book. And if any book is worthy of more attention, Warm Bodies is it.

Rating: 9 – Awesomesauce, although I wavered between an 8 and a 9, I had to go with my heart here. Even with its flaws, Warm Bodies is a fantastic book that achieves the holy grail of zombie fiction – it incites, it provokes, and it lingers.

Reading Next: The Girl Who Circumnavigated Fairyland In A Ship Of Her Own Making by Catherynne M. Valente