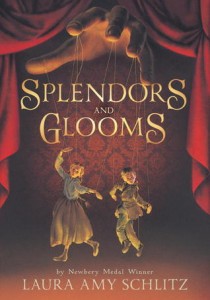 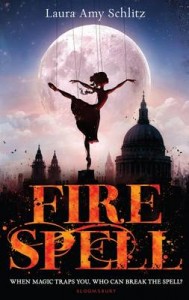 The master puppeteer, Gaspare Grisini, is so expert at manipulating his stringed puppets that they appear alive. Clara Wintermute, the only child of a wealthy doctor, is spellbound by Grisini’s act and invites him to entertain at her birthday party. Seeing his chance to make a fortune, Grisini accepts and makes a splendidly gaudy entrance with caravan, puppets, and his two orphaned assistants.

Lizzie Rose and Parsefall are dazzled by the Wintermute home. Clara seems to have everything they lack — adoring parents, warmth, and plenty to eat. In fact, Clara’s life is shadowed by grief, guilt, and secrets. When Clara vanishes that night, suspicion of kidnapping falls upon the puppeteer and, by association, Lizzie Rose and Parsefall.

As they seek to puzzle out Clara’s whereabouts, Lizzie and Parse uncover Grisini’s criminal past and wake up to his evil intentions. Fleeing London, they find themselves caught in a trap set by Grisini’s ancient rival, a witch with a deadly inheritance to shed before it’s too late.

Newbery Medal winner Laura Amy Schlitz’s Victorian gothic is a rich banquet of dark comedy, scorching magic, and the brilliant and bewitching storytelling that is her trademark..

Why did I read this book: I absolutely adored Laura Amy Schlitz’s A Drowned Maiden’s Hair: A Melodrama and have been on tenterhooks to read Splendors and Glooms since I first heard about its promising blend of fantasy and gothic fiction.

But sometimes I get more specific and say: because of books like this one.

It’s Clara’s Wintermute 12th birthday and as usual there will be a trip to Kensal Green and the opening of presents in the afternoon. This sounds great at first until we realise that Kensal Green is the cemetery where Clara’s four siblings (including her twin brother) have been interred after they all died of Cholera a few years back – Clara remaining the only survivor child of the grieving Wintermutes – and the place she is taken by her parents more often than she cares for. The presents are from her parents but also from the Others, the dead children whose death masks and photographs take over the drawing room, whose presents to Clara are bought by their parents as though they are still alive and whose ghostly presence is almost palpable in a house that is an altar to their memory.

(Creepy doesn’t begin to cover it. But that’s only the start)

Unlike other years, Clara managed to convince her parents to throw a party and to hire Professor Grisini’s awesome puppet theatre to make an appearance. Clara can hardly contain her – unladylike – excitement and during the performance lets out a loud laugh that disappoints her mother to the point where she tells Clara she will NEVER forgive her. So Clara goes to bed on her birthday completely devastated and in disgruntled tears. Her father tries to calm her down but Clara can’t contain herself and says she is sick and tired of the Others taking over her life and she confesses she feels she should have been the twin who died. Her father only half-heartedly disagrees and we, the readers, hear his thoughts: he too wishes that the twin brother had survived instead. And Clara too, feels the heaviness of this unspoken truth at the core of her soul.

(Has your heart broken yet? No? Just keep reading)

That night Clara disappears. At first her parents think she has run away but soon they learn she has been kidnapped and they are guilt-ridden and desperate to have her back. But although there is a demand for money, the criminal responsible for the kidnapping disappears without a sign, without taking the money and most importantly, without returning Clara.

Who comes to and realises she has been turned into a puppet.

Grisini is of course, the culprit and it turns out that he is also a magician. He turned Clara into a puppet so he could hide her until he could get the kidnapping money but on the very night he was to return Clara, there is an accident….and Clara is stuck as a puppet unable to move or to speak. Grisini is gone and for all intents and purposes…dead.

(We shall leave Clara and Grisini for a while now)

Lizzie Rose and Parsefall are two orphans who work assisting Grisini – not exactly against their will but certainly purely out of need to survive. Lizzie Rose is the daughter of a famous stage actor and the embodiment of ladylike behaviour even as her tattered clothes and constant hunger give away the fact that she is no lady at all. Parsefall is the youngest kid in this story and the very definition of a street urchin out of a Charles Dickens story – barely able to speak properly, illiterate, dirty, abused, a thief and a liar. The two clearly care deeply for each other as brother and sister but they can barely get along well before getting at each other’s throats.

Until they find themselves alone, Grisini gone, without money and with a puppet they are SURE to be Clara – the girl they met that day in that fancy house. They just don’t know what to do about her or how to survive in London.

Enter Cassandra Sagredo – Grisini’s former lover and his rival. A dying witch with a powerful jewel that needs to be destroyed but Cassandra can’t do it herself. She needs a child to steal it from her and who better than the Grisini’s orphans to do the deed? So she concocts a plan to bring the children to her manor in the country.

That’s how Lizzie Rose, Parsefall and Clara find themselves on their way up North, toward their possible doom. That’s how the trio will face two wicked villains and fight for their lives and their futures.

That’s how Splendors and Glooms STARTS.

(That’s right – all of this? All but the set-up of this story)

Splendors and Glooms is a Victorian gothic tale that is ALL THE THINGS. creepy and magical, horrifying and amusing, poignant and heart-warming, in a way that really suited me.

The melodrama, the twists and oh my sweet lord, the sheer villainy of the villains are top-notch and straight out of The Gothic Book of Gothicness.

The heroics, the adventure, the sympathetic trio of children protagonists come directly from the Great Book of Awesome Characters.

Theatrics aside though, the story is brilliantly executed. All the characters mentioned above share the spotlight to one extent or the other and all of them share the narrative.
The slow, meandering (but not convoluted) pace allow for these characters – all of them- to be constructed beautifully and developed with gusto and complexity. All of them have horrid aspects to their personality, and are not at all perfect, not even the heroes and I LOVE that. Although all of them (apart from one of the villains) prove to be ultimately extremely sympathetic.

I loved for example how Lizzie Rose often knew when someone was being theatrical and playing a scene out of an internal play and I loved how she used that to her advantage. I loved how Parsefall was a gifted puppeteer and an accomplished thief but also a very, very young boy who needed someone to care for him. There was in fact, several moments in this story where I wished I could CRUSH the adults in this story for what they do to these children, and then proceed to adopt the kids.

I loved how a subplot of this story followed Clara’s parents as they realised how their action impacted their only surviving child and how that guilt is almost enough to destroy their marriage and I adored how – very slowly, their lives and their relationship are mended.

In fact, one of the main themes of Splendors and Glooms is the mending of relationships, the bridging of gaps – the growing up and moving on. And another theme is how most of the characters are somehow trapped, caged in a self-created hell. Cassandra is trapped by her own deeds and her memories. Clara’s parents, by the death of their children. Clara has survivor’s guilt, Parsefall doesn’t want to remember certain things and Lizzie Rose is unable to let go of her past.

These themes are woven into the story with an assuredness I hardly see. Furthermore, this features compelling characters that want to change their lives, where having ambitions and wishing for more is not a bad thing, where orphans are not martyrs or goodie two shoes. The female characters are awesome and well-developed and as heroic as their male counterparts (or more) and and and

MY STRINGS! THEY ARE BEING PULLED!!

Kudos to the author for accomplishing that with flair and competence. Splendors and Glooms is beautifully done, a very emotional, heart-warming story with a perfect ending…and I will now just sit here and wait for the awards shower it will be inevitably getting.

Clara came awake in an instant. She sat up in bed, tingling with the knowledge that it was her birthday. On this very day, the puppet master Grisini would perform at her birthday party. If all went well, she would have tea with Grisini’s children.

The room was dim. The curtains were drawn tight against the November chill. Clara gazed at them intently. If it was very foggy, Professor Grisini might not come. Everything would be ruined; her twelfth birthday would be like all the others, with a trip to Kensal Green in the morning and presents in the afternoon.

Clara liked presents, but she dreaded the ceremony of opening them. It was ill-bred to show too much excitement, but if she wasn’t grateful enough, she ran the risk of hurting her mother’s feelings. Clara thrust the thought aside. This year she would do everything exactly right.

She flung back the coverlet and tiptoed across the nursery floor, noiseless as a thief. If anyone came in, she would be scolded for walking barefoot. She reached the window and slipped her hand between the curtains. There were two sets between herself and the outside world: claret-colored velvet on top, frilled muslin next to the glass. The muslin was sooty from the London fogs; though the windows fit tightly, the fog always found its way in. Clara leaned
forward and peered through the peephole she had made. Her face lit up.

The view that greeted her was dismal enough. The trees in the square had shed their leaves, and the city was dark with grime. But the sky was white, not gray; there was even a wisp of blue sky between two clouds. It was a rare clear day. Professor Grisini would surely come.

Reading Next: The Broken Lands by Kate Milford