Title: What Happens in London 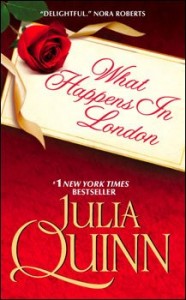 Stand Alone or Series: It is a stand alone but main female character is the best friend of the heroine from The Secret Diaries of Miss Miranda Cheever.

Summary: Rumors and Gossip . . . The lifeblood of London

When Olivia Bevelstoke is told that her new neighbor may have killed his fiancÉe, she doesn’t believe it for a second, but, still, how can she help spying on him, just to be sure? So she stakes out a spot near her bedroom window, cleverly concealed by curtains, watches, and waits . . . and discovers a most intriguing man, who is definitely up to something.

Sir Harry Valentine works for the boring branch of the War Office, translating documents vital to national security. He’s not a spy, but he’s had all the training, and when a gorgeous blonde begins to watch him from her window, he is instantly suspicious. But just when he decides that she’s nothing more than an annoyingly nosy debutante, he discovers that she might be engaged to a foreign prince, who might be plotting against England. And when Harry is roped into spying on Olivia, he discovers that he might be falling for her himself . .

Why did I read the book: Because it is a Julia Quinn book. Simple as that.

This is what happens in London: gossip mongers say that Sir Harry Valentine killed his fiancée. His next door neighbour, the curious and beautiful Olivia Bevelstoke decides to investigate and proceeds to observe Harry as he works in his office, from her bedroom window. She thinks she is being subtle but Harry knows his nosy neighbour is there watching him.

This is what happens when they first meet, officially: they do not like each other. Olivia thinks Harry is arrogant and annoying and a number of other things but

especially when he dared to refer to seeing her watching him! Harry on the other hand is equally unimpressed with Olivia – he thinks she is just another mindless, pretty young girl, unintelligent and cold.

But then, Harry – who works for the War Office as a translator – is told to keep an eye on Olivia because one of her suitors is a Prince Alexei from Russian who is suspected of being a spy. Next step is to pay Olivia a visit and it’s then that these first impressions are revised – Harry realises that the person she is in public is only what she is supposed to be. What people expect from her – to be pretty and nothing else because that was enough. But behind the lady- like façade, she is smart, witty, unusual. Unlike many of her contemporaries she likes to read the newspapers, for example.

When Olivia is direct and sincere about what she thinks and Harry is equally direct and sincere, one my favorite things in romance happens: they become friends. They have that sense of communion, of things in common, they share laughter. How I love to see a couple laughing of things only they understand. There is laughter in their talks, in their teasing, when they kiss. There is one word that I don’t use a lot in my reviews but I have to use it here because it is the most appropriate one: what happens between Olivia and Harry is cute. Like when they talk to each other from their windows – or how they discuss the gothic novel Miss Butterworth and the Mad Baron. Or Olivia’s mental lists – or epigraphic oddities – like the one “ How I Would Like To Kill My Brother version 16”.

I just adore when the “falling in love” process is shown in such a positive way, with so much joy – there is no other word to describe what Harry and Olivia feel when they realise they are in love with each other: a sense of pure, unmitigated joy – like in this moment:

“(…) he could not resist one last look at her face.
And in that moment he finally understood what people meant when they said someone’s eyes lit up.
Because when he told her to be at her window at six, she smiled. And when he looked into her eyes, it was as if the whole world was bathed in a soft, happy glow, and all of it, every little bit of good and fun and happiness – it all came from her. From this one woman, standing next to him at her front door in Mayfar.
And that was when he knew. It has happened. It has happened right here, in London.
Harry Valentine had fallen in love.”

Altogether now please: hand to your hearts and awwww.

They go from animosity to friends and from there to falling in love. Their story is easy, smooth (well, except for the few pages toward the end when there is a secondary plot with the Russians and then all of a sudden , we are reading a suspense novel and that really could have been entirely left out), light and extremely funny and romantic. This is not to say that they lack depth: Harry for example has had a seriously sad childhood (he can tell you how many times, exactly, he has cleaned his drunk father’s vomit – what kind of childhood is this when a child keeps tabs of things such as cleaning a parent’s vomit?) but he does not brood for it has shaped the man that he is , in the way that he does not drink alcohol for example. He behaves like an adult who knows his family’s shortcomings but it not overly traumatised by it. His relationship with his brother is one that is not explored in depth but the small amount of time dedicated to them is significant (Harry left as soon as he was able to, to join the army and left his brother alone with his parents) and I would not mind reading about Edward at a later book.

In fact, I wouldn’t mind reading about several of the characters that appear in the book, specially Harry’s cousin Sebastian who is a Reprobate Rake – normally I would scream “sequel bait” about most of them (well expect for Sebastian, but really who would NOT want to read about Sebastian? You tell me, when you read the book) but they are so interesting you do wish they had their own book. Even the infamous Smythe-Smith Musicale (old timers would remember them from the Bridgerton novels) makes an appearance and do you know that one cousin that KNOWS that they are appallingly bad? If there is one heroine that deserves a book is her and I don’t even know her name – maybe she will be paired off with Sebastian or maybe with Winston, Olivia’s identical twin.

I just know I will be there. Because this is what happens every time I read a Julia Quinn novel: I laugh, I sigh. I feel content and end up hugging the book . Every.single.time. If you don’t do the same when you finish reading this one? After the amazing proposal scene? I will eat a Russian hat.

Notable Quotes/Parts: Throughout the book the characters read and discuss one of those infamous Gothic Novels. Harry presents Olivia with a copy of “Miss Butterworth and the Mad Baron” and they have hilarious discussions as Olivia reads the book and is part repulsed by the clear commercialism of it all and part attracted to the wonderful exaggeration. Rings a bell?

Anyways: there is this one scene where Prince Alexei from Russia asks Harry to read a part of the book, then Harry’s reprobate cousin Sebastian arrives and starts reading (quite dramatically) from the book and next thing you know, the entire household is there and I was laughing so much, like a lunatic. Behold part of it:

“It was a dark and windy night,” Sebastian began, and Harry had to admit he did bring a great deal of drama to it. Even Vladimir was leaning forward to listen, and he didn’t speak English.
“- Miss Priscilla Butterworth was certain that at any moment the rain would begin, pouring down from the heavens in sheets and streams, dousing all that lay within her purview”
Dear God, it almost sounded like a sermon. Sebastian had clearly missed his calling.
“’Purview’ is not used correctly” Prince Alexei said.
Sebastian looked up, his eyes flashing with irritation, “Of course it is”
Alexei jabbed a finger in Harry’s direction. “He said it is not”
“It’s not”, Harry said with a shrug.
“What’s wrong with it?” Sebastian demanded.
“It implies that what she sees is under her power or control”
“How do you know it’s not?”
“I don’t”, Harry admitted, “but she doesn’t seem in control of anything else”. He looked over at the prince. “Her mother was pecked to death by pigeons”
“That happens,” Alexei said with a nod.
Both Harry and Sebastian looked at him in shock.
“It is not accidental”, Alexei demurred.
“I may need to revisit my desire to see Russia, “ Sebastian said.
“Swift justice” Alexei stated. “It is the only way”.
Harry couldn’t believe he was asking, but it had to be said
“Pigeons are swift?”

Reading Next: Branded by Fire by Nalini Singh