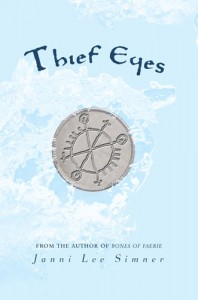 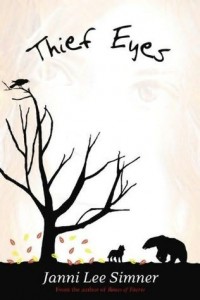 After her mother mysteriously disappears, sixteen-year-old Haley convinces her father to take her to Iceland, where her mother was last seen. There, amidst the ancient fissures and crevices of that volcanic island, Haley picks up a silver coin that entangles her in a spell cast by her ancestor Hallgerd, a sorceress intent on stealing another’s life to escape her own.

To break the spell, Haley sets off on an epic adventure with gorgeous Ari, a boy with a dangerous side who appoints himself her protector. They soon learn that Hallgerd’s spell and her mother’s disappearance are connected to a chain of events that could unleash terrifying powers and consume the world. Haley must find a way to contain the growing fires of the spell—and her growing attraction to Ari.

How did I get this book: I bought it when visiting The Strand back in May

Why did I read this book: It is a retelling of an Icelandic Saga and I got really curious about it.

Thief Eyes opens as a young woman called Hallgerd casts a spell, raging against her father and a broken promise. The spell – cast with fire and coin – takes Hallgerd through time as she searches down the line of her female descendants, trying to find someone who would trade places with her. But each and every one of her daughter’s daughters, knowing the effects of such a magic spell too well, turn their backs to Hallgerd. Until a thousand years down the line, a descendant without any knowledge of magic runs from the fire and is consumed by it. And then, it is her daughter’s turn to face Hallgerd’s offer.

It’s been one year since Haley’s mother disappeared when visiting Iceland with her husband. Haley and her father have now returned to the place where she disappeared from, in search of answers but there is no sign whatsoever of her mother, no clues, no nothing. But she knows that her father knows more than he is willing to say which is something that becomes clear when they meet up with a local friend, someone who seems to believe that magic is a part of this mystery. It is then that Haley comes across a silver coin – the very same coin that Hallgerd threw down the ages and by picking it up, Haley becomes part of this ongoing saga. Together with a boy named Ari, she embarks on a journey to try to break the spell and to save the very future of Iceland.

Thief Eyes draws inspiration from the medieval Icelandic story Njal’s Saga which tells the story of Hallgerd, the one with the “eyes of a thief”, and of her three husbands and then combines it with Norse Mythology. The result is tremendously well done: the fantasy aspect of this story is intriguing and it circles beautifully around time as the repercussion of the spell cast a thousand years earlier are still felt down the line. The Norse mythology elements are also incorporated beautifully in the story not only by introducing characters but also their relationships with the gods and for example the impact of Memory, its loss and how it affects people.

In fact, memory is one the central aspects of this story. For example, there is Haley’s memory of her mother and how it keeps her going or Haley’s memory of her boyfriend, back in America which keeps her from pursuing her feelings for Ari. Above all, there is perhaps, the memory of Hallgerd herself which lives on in the historical saga, a saga that maligns her as a husband-killer. The question of how much of it has been misinterpreted or changed as the years went by is an interesting one. There is also this great exploration of time and history and I thought this was by far the best thing about Thief Eyes and I enjoyed how Haley was a part of it and how things came to an end at the book’s close.

However, on top of these Fantasy elements, the book also has a contemporary facet, which deals with Haley’s feelings and relationships: from her grief at her mother’s disappearance and her anger at her father, to her feelings for her boyfriend back home and the boy who is with her right now. The aforementioned saga is used to make comparisons with Haley’s situation especially with regards to her and her father’s romantic connections. One thing that Haley asks herself when the book opens concerns love and if it is possible to love more than one person at the same time. She is struggling with what happened to her mother and how that was a direct result of her father’s love life outside of marriage and that mirrors her own situation as she develops feelings for Ari, the boy who is definitely not her boyfriend. Although I have to give kudos to the author for presenting an unusual resolution to the love triangle (one that I have never seen before in a YA novel), I think that the love triangle, the comparisons between the two situations felt slightly forced to me. In fact, quite a lot of the contemporary happenings felt… off. On one hand there were these great fantasy elements happening but on the other hand, the side effects of those very fantastic elements on the minds and lives of these two modern kids required a lot of suspension of disbelief when it came to their reactions.

Haley, prior to this trip, had no inkling that magic existed and yet her acceptance of these magical occurrences is extremely easy. There is hardly any questioning, or any real powerful emotional reaction to what I can only call very extreme experiences from her or from Ari. The two deal with memory loss, memory gain, talking animals, shape shifting,time travel and not to mention the terrible truth behind Haley’s mother’s disappearance with such a carefree, accepting attitude that I found hard to understand or accept. It is as though they were detached from their story and that sense of detachment was so strong that it leapt from the pages and unfortunately the consequence is that it affected me: as much as I enjoyed a lot of the book, I didn’t really love it. I would definitely love to read more stories inspired by Icelandic sagas though and am happy that I read this one.

Notable Quotes/Parts: I just love the opening words of the prologue:

I will not allow it.

I will not be given to the first man who asks for my hand, bartered like a horse or a sheep. I will determine my fate, as my father promised me long ago.

My father’s brother Hrut says none may determine their fate, not even Odin One-Eye and his kin. Hrut is a fool. He says I have the eyes of a thief, and that men will suffer for me. He says it is the future he sees.

Let Hrut see what he will. I’ll show him what a thief’s eyes and thief’s heart can truly do. I draw my scarlet cloak close. None can see me, in this cave beyond the Law Rock. None can hear me over the water that roars beyond it.

I take a skin filled with a fox’s blood and pour it into a wooden bowl—driftwood, come over waters I’ve never sailed. I longed once to seek riches across the sea, and my father promised me that as well. Then he told me his promises were a child’s game, nothing more. He told me I was no longer a child, and that my marriage to Thorvald Osvif’s son was arranged.

No matter. I have another uncle, Svan, a sorcerer who lives by Bear’s Fjord to the north. Svan is my mother’s brother, not my father’s. When I asked him to teach me sorcery, he did not deem his promise a game.

Additional Thoughts: You can read more about the author’s research and trips to Iceland on her website.