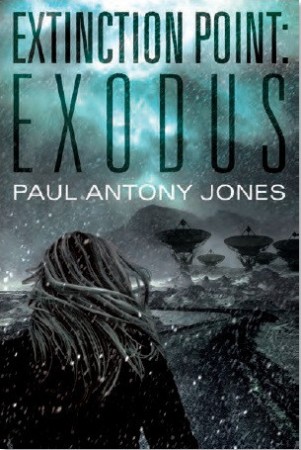 Reporter Emily Baxter survived the alien red rain that blanketed and annihilated the human race. But after the downpour, and the lethal contagion it spread, came an even greater horror: the rampant transformation of the dead into something utterly unearthly.

With a terrifying new form of life emerging from the mutated landscape, Emily’s only hope is to flee toward distant Alaska where she can unite with the survivors who have reached out to her from a remote science facility. The journey from New York will be long and painstaking, and Emily has only her faithful dog and whatever she can carry. But, after discovering a small family of refugees along the way, Emily’s determination to escape the unfolding catastrophe and carve out a new future is renewed. Standing in their way are Earth’s new masters, equally determined to survive and thrive, and possessed of monstrous capabilities Emily and her allies can’t begin to imagine…until they’re face to face with the hideous reality.

In the battle about to begin, there will be no room for mistakes or mercy—only the most ruthless instincts to survive.

Stand alone or series: Book 2 in the Extinction Point Series

Why did I read this book: I thoroughly enjoyed the first book in this series, Extinction Point. Even though the writing is a bit stilted and the book overall could use some polish, Paul Antony Jones is a heck of a storyteller, and I was eager to continue Emily’s adventure as the sole survivor in an alien-infested world. As soon as Exodus was available for sale, I purchased it immediately.

It has been a few short weeks since the red rain first appeared, pouring down on the planet and killing every living creature in its path. For some inexplicable reason, Emily Baxter alone has survived the onslaught of red death and all of Manhattan is a ghost town. That is, it’s a ghost town until the red dust comes, and spiderish alien creatures emerge from dead human husks. Thanks to a solar-powered satellite radio phone, however, Emily discovers that she is not the last human on the planet – a scientific research team in the remote distant reaches of the Arctic has survived, beyond the reach of the red rain, protected by the freezing temperatures.

As the alien spider creatures organize and start building strange new structures (the purposes for which are unknown to Earth’s remaining indigenous population), Emily packs a bag, commandeers a bike, and makes her way north. (A true New Yorker, Emily has never learned how to drive, making the trek to Alaska painfully slow.) Along the way, Emily meets another survivor – a malamute she names Thor, shortly followed by a single father and his two children. Together, the group are in a race against time – the red rain and spider creatures were only the beginning of the invasion. The true storm is coming, and the only place remotely safe is to the far, frigid north.

The second book in a planned trilogy (or possible tetralogy), Exodus continues the fast-paced thrill-ride that started with Extinction Point. Like its predecessor, Exodus is heavy on the action yet slow on the plot development or actual answering of any questions – it’s episodic, in other words, and very much like a television show (the more I think about it, the more it feels kinda like Lost). And, like my favorite fast-paced tv shows, Exodus keeps you hooked and hungry for more.

Easily, this is the book (and the series’) greatest strength: its relentless forward momentum and apocalyptic scope. I love that the stakes keep increasing in this book, and that we see the dramatic implications of the alien invasion of the planet increase exponentially. In the first book, we see the mass death of the human race (and almost every other form of animal life). In the second, we see the next wave of the invasion with the arrival of unprecedented superstorms that irrevocably change the planet’s climate, terraforming Earth for some new form of life. This progression, though painfully protracted (I just want the aliens to get there already, dammit), it’s also a natural prelude to a big, unstoppable storm. I like that.

I also like that heroine Emily teams up with other survivors in this second book, especially after spending the majority of the first book on her own – after all, it makes sense that there would be other scattered survivors (those who were shielded from the rain or those who also have Emily’s immunity). With other humans come other complications, though, and as Emily meets up with her new companions and they make their way northward towards Alaska, the communications with her contact on the other end of the satellite phone become increasingly intermittent and strained. I also appreciate that the hurdles placed in Emily’s path feel both justified and natural to the situation. For example, Emily can’t drive and feels like it is much safer on her bike than trying to learn how to maneuver a vehicle. When she is forced to driving (under great duress, I might add), it goes just about as well as you’d expect (i.e. badly). Jones is an author focused on detail and minutia, the packing of bags, the siphoning of gas, the disastrous first attempts at putting a car in gear and outrunning an alien creature – and I appreciate that every obstacle is outlined distinctly in Exodus.

Of course, what’s an alien apocalypse story without, ya know, aliens? In the first book, we only see the early stages of invasion in the form of spider-like alien worker drones; in the second, we learn what malevolent things are growing in the new alien trees sprouting up all over the place. When we finally see the face of Earth’s conquerors, it’s pretty terrifying and wonderful stuff. I don’t want to spoil it, but there’s a pretty awesome tentacle-y scene, reminiscent of The Thing. (That said, I do wish we were given more answers and interactions with Earth’s invaders.)

While Exodus does plenty of things well, it also falls short from being truly awesome in a few key areas. From a character perspective, Emily is brash and tough but never quite feels like a real person. This is actually part of a larger problem at the root of the series – namely, the stilted and awkward writing style. Paul Antony Jones is an undeniably strong storyteller, the direction of this book is fantastic and the action is unrelenting. That said, the prose is forced and synthetic, and the book could use some serious polish. For example, in the prologue, an exchange between international space station astronauts:

The implacable Russian slowly rotated to face her. “I said, perhaps it is alien in origin. The theory of panspermia is an accepted possibility of how life began on earth. Maybe what we are observing is an example of that theory in action. Who knows for certain? I have no other suggestions.

Fiona vaguely remembered watching a documentary on the Discovery Channel at some point that briefly covered the theory behind the unproven hypothesis. “Isn’t that the idea that life on earth originally came from outer space?”

You get the infodumpy, graceless picture. I had a similar beef with Extinction Point – originally a self-published book – regarding the writing; Exodus continues much in the same vein.

Still, keeping the lower stylistic points and lack of polish in mind, Exodus does a solid job and delivers the action and tension you’d expect in a popcorn type of summer blockbuster. I thoroughly enjoyed it, and eagerly await the next book in the series (especially given that cliffhanger ending!). Recommended.

Commander Fiona Mulligan had made a habit out of watching the sunrise.

Of course, when you were on board a two-hundred-and-forty-foot-long hunk of metal, hurtling along at just over seventeen thousand miles per hour in a low orbit above the earth and completing almost sixteen revolutions of the earth a day, you got to see a lot of sunrises.

The longest most crew members of the International Space Station got to sleep at any one time was about six hours; couple that with the disorienting effect of waking surrounded by darkness after one period, then sunlight the next, and it could play havoc with your biological clock. Fiona had a simple solution, though; whenever the opportunity presented itself, she would try to time the end of each sleep period to coincide with one of those sunrises.

Rating: 7 – Very Good; I was wavering between a 6 and 7, but I was thoroughly entertained and went with the 7.