Title: The Age of Miracles 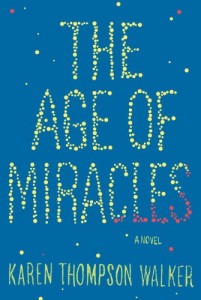 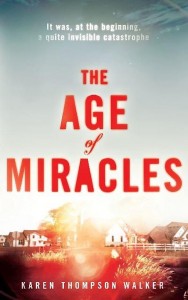 With a voice as distinctive and original as that of The Lovely Bones, and for the fans of the speculative fiction of Margaret Atwood, Karen Thompson Walker’s The Age of Miracles is a luminous, haunting, and unforgettable debut novel about coming of age set against the backdrop of an utterly altered world.

“It still amazes me how little we really knew. . . . Maybe everything that happened to me and my family had nothing at all to do with the slowing. It’s possible, I guess. But I doubt it. I doubt it very much.”

On a seemingly ordinary Saturday in a California suburb, Julia and her family awake to discover, along with the rest of the world, that the rotation of the earth has suddenly begun to slow. The days and nights grow longer and longer, gravity is affected, the environment is thrown into disarray. Yet as she struggles to navigate an ever-shifting landscape, Julia is also coping with the normal disasters of everyday life—the fissures in her parents’ marriage, the loss of old friends, the hopeful anguish of first love, the bizarre behavior of her grandfather who, convinced of a government conspiracy, spends his days obsessively cataloging his possessions. As Julia adjusts to the new normal, the slowing inexorably continues.

Why did I read this book: I am a sucker for apocalypse novels of most any variety, especially of global/science fiction-tinged catastrophe. When I read the synopsis of The Age of Miracles, I immediately wanted it. Then, when Lu, a friend and fellow blogger, told me about her mixed reaction to the book (and lent me her copy following my NetGalley fiasco), it was time to give it a read.

On a day like any other, life on Earth irrevocably, inconceivably changes forever. The news breaks on television, as Julia and her disbelieving family watch on: the Earth’s rotation has slowed. Overnight, the planet’s 24 hour day has lengthened by 56 minutes. Scientists don’t know how or why “the slowing” started, nor can they predict if or how much it will continue in the coming months.

As the days sluggishly pass, they continue to lengthen – from 25 hours long, to 40 hours long, and beyond. And as the Earth’s rotation slows, the planet’s inhabitants are affected in strange and unpredictable ways. Earth’s gravitational pull shifts and strengthens, certain species of animals and plants begin to die en masse (just as strange new symptoms of an unidentified sickness develops in humans), and society itself balances on a tenuous edge. Governments make the decision to stick with a 24 hour clock, throwing day and night out of sync and causing a rift in society between those that want to continue living by the Earth’s movements (“real-timers”) and those that abide by the old 24 hour clock and government sanctions (“clock-timers”). Resources are strained to their limits, as food becomes impossible to grow without artificial power, and the days grow impossibly hot while the nights become impossibly cold.

And for all of these dramatic external changes, symptoms, of the Earth’s ever-slowing rotation, The Age of Miracles is truly the story of 11-year-old Julie as she struggles with her family, her friends, and life in a world that continues to change.

I’m not sure quite how I feel about The Age of Miracles. On the one hand, there are many things that Karen Thompson Walker does brilliantly in her debut novel. The premise of the book alone is brilliant, and I love the gradual, creeping dread that seeps into your bones as you read this melancholy portrait of a future Earth, inching slowly, oh so slowly, towards death. The consequences of such a slowing effect are brilliantly conceived and executed through Julie’s narrative – we see the death of grass, the extinction of different species’ of birds, the failure of the world’s food crops, and the harrowing physical prognosis of those suffering from so-called “gravity sickness”. And, while the science fiction geek in me is skeptical and wants ANSWERS and actual physics, I love that for all of this detail, Walker does not attempt at pseudoscientific explanations. The Earth’s rotation has slowed and continues to slow, and that is the premise we – like all the inhabitants of this fictional, doomed planet – must simply, unquestioningly accept.

But beyond the procedural science and cause-effect relationship of the slowing, The Age of Miracles is truly a book about human emotion, connection, and growing up. And this, unfortunately, is where my thoughts for the book become a bit more muddled.

Decidedly, The Age of Miracles is not a young adult novel. It is a book written for an adult audience, but told through the eyes of an 11-year-old girl named Julie. Except, it’s not really told through an 11-year-old’s eyes. The Age of Miracles is narrated, retrospectively, from a much older Julie as she recalls the day that would change the trajectory of her life forever. This reminiscent narrator tactic can be effective and powerful depending on the novel – in the case of The Age of Miracles, I’m not quite sure I buy it, though. There was something inauthentic and heavy-handed about Julie’s future voice, as she frustratingly foreshadows events and spins the narrative to reflect her future beliefs and expectations. The voice would oscillate wildly between world-weary narrator and innocent child, and the transition felt forced. Perhaps the most frustrating thing about The Age of Miracles, however, is how obvious so many of the allusions and messages are – there are plenty of irritating, ham-handed attempts at Being Deep and Drawing Parallels between the Earth’s slowing rotation and Julie’s Growing Up, for example.[1. The dreaded Sledgehammer Technique rears its ugly head once again.]

Yet, despite these criticisms, I will say that I fell in love that Julie’s coming of age story. The Age of Miracles details the different hardships Julie faces with her worrying mother and her quiet father, the frustrations and anticipation of first love, and the cold reality of growing apart from old best friends. Sure, the slowing has a cold touch on all of these facets of Julie’s life, but they are real struggles and realities that anyone faces when leaving childhood behind, apocalypse or no. And I appreciate that.

Suffice it to say, The Age of Miracles is a mixed bag for me – I appreciate the underlying premise of the novel, just as I appreciated Julie’s story, though I did not particularly care for the way in which it was told. I loved the slowness and the quietness of the plot overall, and the haunting, elegiac melancholy of the story at large. In many ways, Ms. Walker’s book reminds me of one of my favorite novels – Susan Beth Pfeffer’s unparalleled Life as We Knew It. Like Pfeffer’s book, The Age of Miracles uses the lens of the apocalypse to tell the story of a young girl growing up in impossible circumstance. Like Life as We Knew it, The Age of Miracles has a terrifyingly bleak edge and a chilling cause for the end of the world.

But unlike Life as We Knew It – an epistolary novel, narrated entirely by its teenage protagonist through a series of journal entries – The Age of Miracles lacks the raw, powerful, emotional human connection required to elevate the book from merely good to utterly great.

Ultimately, I enjoyed The Age of Miracles, but it falls short of the biggest and most important test that faces any apocalyptic novel: it lacks emotional resonance and characters with heart. Thus, The Age of Miracles is a good novel, but not a particularly miraculous one.

We didn’t notice right away. We couldn’t feel it.

We did not sense at first the extra time, bulging from the smooth edge of each day like a tumor blooming beneath skin. We were distracted back then by weather and war. We had no interest in the turning of the earth. Bombs continued to explode on the streets of distant countries. Hurricanes came and went. Summer ended. A new school year began. The clocks ticked as usual. Seconds beaded into minutes. Minutes grew into hours. And there was nothing to suggest that those hours, too, weren’t still pooling into days, each the same fixed length known to every human being.

But there were those who would later claim to have recognized the disaster before the rest of us did. These were the night workers, the graveyard shifters, the stockers of shelves, and the loaders of ships, the drivers of big- rig trucks, or else they were the bearers of different burdens: the sleepless and the troubled and the sick.

These people were accustomed to waiting out the night. Through bloodshot eyes, a few did detect a certain persistence of darkness on the mornings leading up to the news, but each mistook it for the private misperception of a lonely, rattled mind.

On the sixth of October, the experts went public. This, of course, is the day we all remember. There’d been a change, they said, a slowing, and that’s what we called it from then on: the slowing.

Reading Next: A Gathering of Gargoyles by Meredith Ann Pierce

Over at Kirkus: A Stranger in Olondria by Sofia Samatar