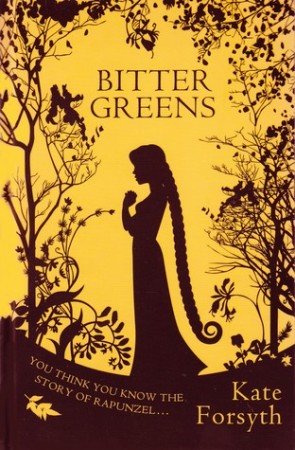 An utterly captivating reinvention of the Rapunzel fairytale weaved together with the scandalous life of one of the tale’s first tellers, Charlotte-Rose de la Force.

Charlotte-Rose de la Force has been banished from the court of Versailles by the Sun King, Louis XIV, after a series of scandalous love affairs. She is comforted by an old nun, Sœur Seraphina, who tells her the tale of a young girl who, a hundred years earlier, is sold by her parents for a handful of bitter greens…

Selena is the famous red-haired muse of the artist Tiziano, first painted by him in 1512 and still inspiring him at the time of his death, sixty-four years later. Called La Strega Bella, Selena is at the centre of Renaissance life in Venice, a world of beauty and danger, seduction and betrayal, love and superstition, retaining her youth and beauty by the blood of young red-haired girls.

After Margherita’s father steals a handful of parsley, wintercress and rapunzel from the walled garden of the courtesan Selena Leonelli, he is threatened with having both hands cut off unless he and his wife give away their little red-haired girl. And so, when she turns seven, Margherita is locked away in a tower, her hair woven together with the locks of all the girls before her, growing to womanhood under the shadow of La Strega Bella, and dreaming of being rescued…

Why did I read this book: This book was completely under my radar – it was first published in Australia last year – until more and more readers started recommending it to us. Then I realised it was a Rapunzel retelling mingled with the story of its first teller, a female writer in 17th century France and I had to have it.

Charlotte-Rose de la Force – Mademoiselle de La Force – was a 17th century French writer and poet, King Louis XIV’s second cousin and a member of his scandalous Court. Raised a Huguenot but forced to convert to Catholicism by the King, she was then given a state pension and later banished to a convent where she wrote her memoirs.

Her most famous work is the fairytale Persinette, later adapted by the Brothers Grimm as Rapunzel. She is considered to be one of the tale’s first tellers.

The biggest focus of the novel is Charlotte-Rose– she is the main narrator (first person) – depicting her life from the moment she joins the convent and going back in time to tell her tale in a story that spans years and years and is intimately connected to the biggest events and personalities of 17th century’s French history.

In the convent, Charlotte-Rose hears the story of a young girl named Margherita, who is sold by her parents for a handful of bitter greens to La Strega Bella, a witch who locks her away in a tower when she turns 12, for Nefarious Reasons. La Strega Bella is Selena Leonelli, a famous courtesan in Venice, Titian’s red-haired muse and whose dark, tragic past leads her down a path of vengeance and obsession.

The three threads intertwine and the story moves back and forth between them.

Bitter Greens is an extremely ambitious novel. It is so in terms of its grand scope because it covers two different historical eras and settings (France 17th century and Venice 16th century) but also in its attempt to combine historical facts, Fantasy elements and a fairytale retelling. The result is a mixed bag that doesn’t always work seamlessly.

Charlotte-Rose’s narrative makes up for the biggest chunk of the novel. Her life is truly fascinating. She was a famous female writer in the 1600s; she had deep knowledge of the ups and downs of the French court of Louis XIV and its main events including the religious persecution of the Protestants, the witch hunting known as the Affair of the Poisons (a huge scandal that led to the execution of 36 high-ranking people under charges of witchcraft). She also – and I can’t stress this enough – dressed up as a dancing bear in order to rescue her fiancée when he was being kept away by his own father who refused to let him marry the penniless Charlotte-Rose. True fact.

Unfortunately, this part of the novel spends a lot of time describing in DETAIL the life within the French court and it ends up being not so much about Charlotte-Rose’s life but more about the King and his affairs (of the State and of the Heart). It is a choice that doesn’t exactly pan out because whereas the history-geek in me revelled in learning about the French court and Venetian life, the reader in me noticed that instead of providing what could have been a truly fascinating account, the writing is far too awkward and effectively bogged down by obvious historical research:

I snapped my powder box shut and thrust it at her, snatching the small jewelled container in which I kept my patches, the little beauty spots made of gummed taffeta that were very useful for hiding pimples or smallpox scars.

Françoise was the granddaughter of the Huguenot writer Agrippa d’Aubigné. Born in Pons, only a hundred miles from the Château de Cazeneuve, he had written one of my favourite childhood books, Les Aventures du Baron de Faeneste, about the comic escapades of a Gascon in Paris. Born in a debtor’s prison, Françoise had married the crippled poet Paul Scarron at the age of sixteen. She looked after him till his death eight years later but was then left impoverished. She had seemed the perfect choice to look after Athénaïs’s children, leaving Athénaïs free to look after the King.

Within Charlotte-Rose’s historical, realistic story there is an added element of the fantastical. I mentioned the Affair of the Poisons, in which dozens were killed, condemned of witchcraft. One of the many real life figures that were killed was a midwife and poisoner known as La Voisin. In the book, she is an actual witch whose love potions and talismans actually worked. I love Historical Fantasy and I love stories featuring witches but in the context of this novel – so preoccupied with historical details and facts – it makes me highly uncomfortable to read about a historical character that was actually burnt for witchcraft being portrayed as a real witch. Regardless of the fact that she was in fact a criminal, to write La Voisin as a real witch, in my own reading, gives a certain degree of legitimacy to what was a highly problematic historical period.

Despite the awkwardness of the writing – which is too didactic and academic in parts – there were two things truly fascinating and engaging about Bitter Greens: its depiction of female characters and its retelling of Rapunzel.

The latter is where the author’s writing actually works and shines: Margherita’s story is told in third person in a beautifully rendered narrative that reinvents the story of Rapunzel by introducing new elements (to our and her own horror, her hair is braided with the hair of 8 previous “rapunzels”) whilst sticking closely to the original story. I loved that Margherita’s story is infused with a true sense of horror (the first few days inside that tower, where she tries absolutely everything she can to escape and almost descends into despair) but also agency. Her mantra throughout her incarceration was:

My name is Margherita. My parents loved me. One day, I will escape.

Speaking of character agency, more interesting to me was the story’s depiction of its many female characters and of the lives that women could have in the time periods it covers. Even though the story seems to focus largely on the simplistic dichotomy of saint vs whores with a plethora of female characters that fall basically in the realm of courtesans, mistresses, virgins and nuns, I enjoyed reading the portrayal of those very characters as complex people with agency, intelligence and power within those roles. Even if those are definitely limited by patriarchy: it is disheartening to read about the long list of Louis XIV’s mistresses all of whom enjoyed a great deal of political power until the King puts them aside; or how Charlotte-Rose’s life prospects were limited by the fact that she was poor and with a scandalous background (her “scandalous background” nowhere near as scandalous as the men in the Court, of course). I appreciated that this unfairness is challenged even if sometimes with a perhaps too modern bite to it:

The lives of those female characters are also great in terms of the themes the book explores: imprisonment (literal and figurative), love, sexual power, poverty and choice.

Trigger warning for the next paragraph: Rape

The one misstep here is I think, Selena Leonelli’s background story and how her obsession with youth and beauty were born after she witnessed the violent gang rape of her own mother (seeing only but the men’s shoes and feet). This is a very gruesome scene in which a former patron violently rapes her mother and then offers her to his servants, then to her servants and then to every single man he can find in the streets including several sick, filthy homeless men. Her mother is physically and psychology broken and dies soon after that. Although I always try to understand the drive behind scenes like these as an attempt to write “what life was like for women of that era” I still think this was needlessly graphic and outlandish, working purely as “rape as motivation”[1. Thanks to Mieneke for helping me clarify my feelings about this.]. Of course, it is also interesting how this need to be “realistic” is counteracted by the fact that Selena is able to then affect revenge on these men in the ensuing months cursing them as a witch and because she can recognise them by the shoes they wore.

It probably sounds as though I didn’t like the book but I actually did enjoy it. The retelling of Rapunzel, the many female characters and above all, learning about Charlotte-Rose made up for the problems I had. In the end, I’d still recommend it, but with sizeable reservations.

Maman continued eagerly, ‘And although I miss my husband greatly, I hold my estates and titles in my own right, and it was always my responsibility to run them wisely. My husband had his own affairs to manage. The Château de Cazeneuve is mine, and it shall be my daughter’s after me.’ Anne-Marie-Louise was gazing at her with bright curious eyes.

‘So, madame, you think it possible for a woman to have her own little corner of the world and be mistress of it?’

‘Of course,’ my mother answered her. ‘Women have been saints and soldiers and mothers. They are more than capable of managing their own affairs.’

They shared a warm complicit smile.

‘Do you not know that women are defective and misbegotten, a male gone awry?’ Cardinal Mazarin said with scathing contempt. ‘St Clement spoke truly when he said that all women should be overwhelmed with shame at the very thought that she is a woman.’