Today, we are delighted to be a part of the blog tour celebrating the release of Stolen Magic, the third book in Stephanie Burgis’ amazing, incredible, superlative Kat Stephenson series. 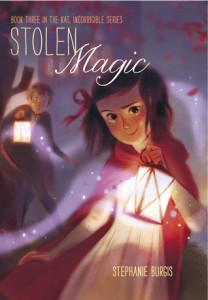 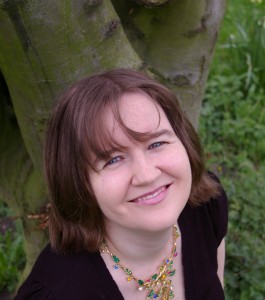 Here to talk about her Inspirations & Influences for the incorrigible Kat and her adventures, please give a warm round of applause to Stephanie Burgis!

It is a truth universally acknowledged…that I love, love, love Jane Austen! I can’t count how many times I’ve re-read her novels, ever since my dad first read me Pride and Prejudice when I was eight. I became obsessed! I tore through all of them as a kid, and then I re-read them again and again. I still re-read them regularly for their humor, for their quiet but deeply-felt romance plots, and, most of all, for Austen’s sharp, ruthless insight into the way people really work, for better or for worse.

But my Regency-set Kat novels don’t spring purely from Jane Austen…because when I was twelve, I discovered Georgette Heyer. I picked up Heyer’s Regency rom-coms only because they were set in the same period as Jane Austen – but then I fell in love with them because they were fabulous. The zany humor! The wild adventures with highwaymen, notorious rakes, smugglers, and cross-dressing! And oh, the fabulously over-the-top, passionate romance! I swooned and swooned again as I read them. I was in love.

And then, just two years after I first fell in love with Georgette Heyer’s madcap Regency world, I discovered the urban fantasy novels of Emma Bull and Charles DeLint. I’d been a fan of high fantasy ever since my dad first read me The Lord of the Rings, and I already adored high fantasy novels by Robin McKinley and Patricia McKillip – but I was utterly overwhelmed by the impact of magic actually incorporated into ordinary, everyday life. Magic in the real world! How amazing was that?

From the moment I finished reading War for the Oaks, I knew: I wanted to be a fantasy writer. And I’ve never changed my mind since then.

I wrote a zany adventure set in Regency England, with highwaymen, balls, and marriage plots – but I told it from the perspective of a snarky younger sister deeply involved in magical adventures of her own. Magic may be the greatest scandal in Kat Stephenson’s Regency England – but that won’t stop her from using it and anything else she needs to do what’s best for her exasperating older siblings (whether they like it or not).

As I sat down to write Kat, Incorrigible, I spent the first ten minutes of every writing session reading through Jane Austen’s letters to get the right period voice into my head. I wanted to write an homage to Jane Austen herself, so I wrote Kat as the daughter of a vicar without much money, because that was what Jane Austen was, too. Austen’s father used to be a Fellow at Oxford (known as “the handsome Fellow”), so Kat’s dad is a former Fellow, too – one who, like Austen’s father, often tutors students in his home.

But when it came to the Regency ingredients for my series, I reached straight for the madcap tropes that Georgette Heyer made famous, the ones that Regency romance authors have been playing with ever since. I wanted to play with the sheer fun of them, too, but only and always from Kat’s smart, skeptical twelve-year-old perspective.

Highwaymen ride around Kat, Incorrigible – but don’t turn out quite the way that Kat expected! A notorious rake who knows that he’s irresistible to women swaggers right into Book 2, Renegade Magic – and Kat puts him firmly in his place. In Stolen Magic, smugglers lurk in the caves below Hepworth Park – but they aren’t romantic. No, the real romance is saved for Kat’s hapless older brother Charles…who has no idea what to do about it!

So it’s a good thing that he has a younger sister who’s only too ready to roll her eyes at him and take charge of everything – even as she fights to save her family and her country from a dastardly magical plot.

Kat’s voice and adventures are all her own…but I could never have written them without the books that I fell in love with forever, the ones that are still on my keeper shelf and always will be.

About the Author: Stephanie Burgis grew up in East Lansing, Michigan, but fell in love with Regency England when she discovered the novels of Jane Austen and Georgette Heyer. The author of Kat, Incorrigible; Renegade Magic; and Stolen Magic; she decided to be a writer when she was seven and sold her first short story when she was fifteen. Stephanie lives with her husband, fellow writer Patrick Samphire, their son, and their dog in Wales.

We have THREE copies of Stolen Magic up for grabs. The contest is open to addresses in the US and Canada, and will run until Sunday, April 6 at 12:01 am EST. In order to enter, use the form below!