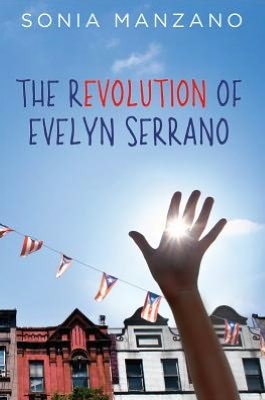 Title: The Revolution of Evelyn Serrano

There are two secrets Evelyn Serrano is keeping from her Mami and Papo? her true feelings about growing up in her Spanish Harlem neighborhood, and her attitude about Abuela, her sassy grandmother who’s come from Puerto Rico to live with them. Then, like an urgent ticking clock, events erupt that change everything. The Young Lords, a Puerto Rican activist group, dump garbage in the street and set it on fire, igniting a powerful protest. When Abuela steps in to take charge, Evelyn is thrust into the action. Tempers flare, loyalties are tested. Through it all, Evelyn learns important truths about her Latino heritage and the history makers who shaped a nation. Infused with actual news accounts from the time period, Sonia Manzano has crafted a gripping work of fiction based on her own life growing up during a fiery, unforgettable time in America, when young Latinos took control of their destinies.

Why did I read this book: This book was completely under my radar last year and I only heard about it when Kirkus published their top 2012 books.

This is a review brought to you by two hands.

On the one hand, The Revolution of Evelyn Serrano is an incredibly engaging, thoughtful novel featuring a young girl learning about her own history.

Rosa María Evelyn del Carmen Serrano is the daughter of Puerto Ricans living in El Barrio, the Spanish Harlem neighbourhood in the 60s, at that point in time when change is coming – when the Young Lords, a Puerto Rican activist group start protesting about the living conditions in El Barrio.

The novel follows the historical events from Evelyn’s point of view and depicts her own growth in parallel. Her point of view is coloured by her own experience as a young Latina living in a poor, forgotten neighbourhood in America, by her own relationship with a traditional, high-handed and reactionary mother and her increasing awareness of political and social issues surrounding their lives. The latter is motivated by the driving force that is her revolutionary activist grandmother who recently came to live with them. It is through her grandmother that Evelyn (not another Rosa, not another Maria, not another Carmen) learns about Puerto Rico’s rich and sad history of oppression and thwarted revolution and the roles that her own family has played in its goriest moment.

This is an extremely powerful story, that captures important historical moments and how they affect people both as individuals and as members of a community. It beautifully portrays the three main female characters of Evelyn (not another Rosa, not another Maria, not another Carmen) , her mother and grandmother and shows the segregation of ideals within one family and how it affects their bonds.

I specially loved Evelyn’s (not another Rosa, not another Maria, not another Carmen) progressive awareness that involved not only her active role within her own family (she starts off complaining that her mother always takes on the role of the slave by doing everything around the house but Evelyn herself never helps around either) but also her place as a young Latina girl (because there is also gender roles discussion here) who is proud of her heritage and history and wishes to contribute to that revolutionary moment in time. It’s a potent story, this one: Evelyn (yes another Rosa, yes another Maria, yes another Carmen) and her family’s story as a quiet microcosm that reflects the bigger chaotic picture.

On the other hand, The Revolution of Evelyn Serrano is extremely condensed and its impact somewhat lessened by the fact there is very little in terms of actual development. It actually reads very much like a summary, jumping from point to point without the important connective tissue to turn this into a more cohesive whole. This is all the more glaringly obvious when secondary characters and plotlines are dropped like hot potatoes (Evelyn’s work at the department store comes to mind or one of her friends’ criminal activities) and Evelyn’s r-evolution happens at the speed of light.

I wonder if this and the fairly didactic tone the narrative often takes stems from the fact that the book’s intended audience are middle graders? I always feel frustrated when potentially awesome stories like these are dumbed-down especially when I think about other similar stories where the same cannot be said. In many ways, in terms of intended audience, historical and thematic core, The Revolution of Evelyn Serrano reminded me of One Crazy Summer by Rita Williams-Garcia, Moon Over Manifest by Clare Vanderpool and Flygirl by Sherri L Smith but those books succeeded in the way they did not pander to their readers and therefore for me, becoming the better stories.

Ultimately though, I appreciated and enjoyed reading this book very much but I cannot really say that those two hands are clapping enthusiastically…

As I waited for her to get ready I thought about that golden wild boy who was brave enough to stand in the church and say “There is something wrong here! This is not a community.” His eyes were bright, his skin coppery, he had full lips and what my mother called “pelo malo,” bad hair, because it was kinky. How could hair be good or bad? Like it could behave well or badly on its own. Like it could say something nice and polite or say something mean and nasty. And how could you call hair bad that looked like a crown, and make you look taller, and like nobody could knock you down?

Additional Thoughts: The book has its own website featuring the usual news about the author, reviews etc. There is one really cool section though with original newspapers clippings about the events the story depicts.

Reading Next: The Wee Free Men by Terry Pratchett