Book Review & Giveaway: The Bell at Sealey Head by Patricia A. McKillip

Title: The Bell at Sealey Head 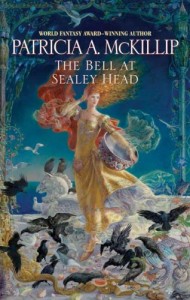 How did I get this book: Review copy (from publisher)

Why did I read this book: I’ve read Ms. McKillip’s Riddle-Master books and highly enjoyed them, and so when I received a review copy of The Bell at Sealey Head in the mail, I was excited to give her newest book a read. Just look at the gorgeous cover! And the intriguing blurb…

Summary: (from amazon.com)
Sealey Head is a small town on the edge of the ocean, a sleepy place where everyone hears the ringing of a bell no one can see. On the outskirts of town is an impressive estate, Aislinn House, where the aged Lady Eglantyne lies dying, and where the doors sometimes open not to its own dusty rooms, but to the wild majesty of a castle full of knights and princesses…

Sealey Head is a mysterious oceanside town, where the strange and magical blend into the daily lives of its residents. For as long as the town has existed, every twilight at the exact point when day slips into night, a single, forlorn bell tolls. No one knows where or what the bell is or what it means, and though some speculate about its mysterious ring, many of the residents of Sealey Head simply accept the bell as part of their daily lives, barely even acknowledging it anymore.

One blustery evening after the toll of the bell, young inkeeper Judd Cauley finishes his daily chores and is ready to escape reality with his latest book when a visitor arrives at his inn’s doorstep. Mr. Ridley Dow, scholar of Landringham, introduces himself to Judd, and explains that he wants a room at the inn while he works on his latest and greatest scholarly project – the mystery of the bell at Sealey Head, and the magical forces surrounding it. Judd, a dreamer, romantic and lover of books, is instantly taken in with Ridley Dow’s confident manner and his belief in magic (not to mention the promises that Judd can read as many of Mr. Dow’s myriad books brought with him to Sealy Head).

On the other side of the small town, young merchant daughter Gwyneth Blair works diligently on her latest story about her favorite topic: the twilight bell’s origins. Pretty, intelligent and bookish, Gwyneth tries to shake the amorous attentions of titled farmer Raven Sproule, to little avail, thanks to the misplaced good intentions of her Aunt Phoebe, as well as the efforts of Gwyneth’s best friend, none other than Raven’s sister, Miss Daria Sproule. The very same afternoon that Mr. Ridley Dow arrives on Judd Cauley’s doorstep, Gwyneth learns from the Sproules that Lady Eglantyne, the last of the Aislinn noble line in Sealey Head is on her deathbed, and the future of the majestic Aislinn House is in limbo. Lady Eglantyne’s heir, the fashionable noble woman Miss Miranda Beryl from Landringham, is summoned to Sealey Head, and as the beautiful woman arrives with her entourage of noble friends, there’s also a sense of urgency about Miss Beryl – as though she knows there is something very important about her soon to be inherited home. Young scullery girl, Emma Wood, has worked in Aislinn House all her life, and knows that there is much magic in the old mansion. Ever since her childhood, Emma has been able to open doors in the house that lead to a parallel world – a strange version of Aislinn House where the beautiful Princess Ysabo must perform meaningless task after meaningless task each day without question, or else the Pattern slips, and Ysabo’s world will crumble.

There is something magical and important about Aislinn House, with its many corridors and secret portals to another world, and somehow Ridley Dow, Miss Beryl, and the mysterious bell are all connected…

Written in Ms. McKillip’s lyrical, flawless prose, The Bell at Sealey Head is a lush fantasy novel, rife with sparkling characters, dangerous magic, mystery, and even romance. From the very first page, from the first description of the briny small town, from the first solemn toll of the mysterious bell, I was enchanted with Sealey Head and her inhabitants:

Judd Cauley stood in his father’s rooms in the Inn at Sealey Head, looking out the back window at the magnificent struggle between dark and light as the sun fought its way into the sea. Dugold Cauley seemed to be watching, too, his gray head cocked toward the battle in the sky as though he could see the great, billowing purple clouds swelled to overwhelm the sun striving against them, sending sudden shafts of light out of every ragged tear in the cloud to spill across the tide and turn the spindrift gold.

The colors! The textures! The effortless grace of the descriptions! The Bell at Sealey Head is a luscious, heady fable that intoxicates the senses with each sentence. Ms. McKillip’s writing is magic in itself, weaving a spell upon its reader – a compulsion spell, to continue reading at all costs. That’s not to say that the novel is some fast-paced knuckle-biter, because it is not. Rather, The Bell at Sealey Head is a quiet, controlled novel, revealing mystery and magic in even measure, growing its cast of characters with each chapter, and then alternating storylines between the young Judd Cauley, the lovely Gwenyth, the dashing Ridley Dow, the inquisitive Emma, and the enchanted Ysabo.

The characters themselves are gorgeously detailed and varied, completely and wholly winsome in their own different ways. The romance between the uncertain dreamer Judd Cauley and the confident Gwyneth is, as many reviewers have remarked, almost Austen-esque in its witty, lighthearted – at times comedic – manner. The Sproule siblings, with Raven’s awkward attentions and Daria’s chatterbox personality are vibrant characters in their own right. Of course, the true stage-stealers are the mysterious Mr. Ridley Dow with his fascination with magic and his flashy wardrobe, and the rebellious Princess Ysabo who questions the Pattern, even when it means danger to herself and her family.

The Bell at Sealey Head has everything I could want in a novel – a dash of romance, an ancient and enduring enchantment, compelling characters, and an irresistible element of the magical and fantastic. It is a whimsical fable with twists and turns, yes, but at its heart, it is simply a beautiful story. I loved the world of Sealey Head from start to finish, and highly recommend it.

Ysabo was on top of the tower, feeding crows again. It was only bread from last night’s supper, and a few scraps of meat; the knights had eaten everything else. As always, gulls circled and wove among the crows, crying in their piercing, tormented voices as though they had eaten every fish in the sea, every plump morsel in its shell on the shore, and were on their last breaths with hunger. But they were wary of the crows and rarely snatched a mouthful. Ysabo had seen why the first time she had fed them, when she was a little girl. The gull that had caught a crust out of her bowl had been transformed instantly into a raging tumble of black feathers and beaks. The midair brawl had quickly flown itself over the sea, where, as the black knot had untangled itself into birds again, something ragged, limp, and bloody had dropped into the waves. The crows flew back to the tower, landed peacefully at Ysabo’s small, slippered feet. She had stared at them; they had looked back at her, beaks clacking, something knowing, mocking in their black eyes. SHe had dumped the rest of the scraps over their heads and fled.

But Maeve had made her go back. “It’s your duty,” her grandmother said, “from this day. We all have our duties. They must never, ever, ever be neglected. Not one. Don’t be afraid of the crows. They are wise and powerful, like the knights. Like the knights, they kill their enemies. But they would die to protect us. All they need is that we never fail in our solemn responsibilities.”

“Why?” the very small Ysabo asked. “What would happen?”

“We are sworn,” Aveline had said in her rich, husky voice, shaking her bright head, her great gray eyes seeming to see, in that moment, all the sorrows of the world in that sunny morning, “That is enough for you to know. Never ask again.”

We are giving away TWO copies of The Bell at Sealey Head, courtesy of the publisher. The contest is open to residents of the US & Canada only, and will run until Saturday October 17 at 11:59 PM (Pacific). To enter, simply leave a comment here. We will announce the lucky winners this Sunday in our Smugglers’ Stash. Good luck!

Verdict: I adored The Bell at Sealey Head, and cannot recommend it enough. In fact – does anyone have any other Patricia McKillip recommendations for me? I have The Changeling Sea on its way.