Book Review: The Cadet of Tildor by Alex Lidell 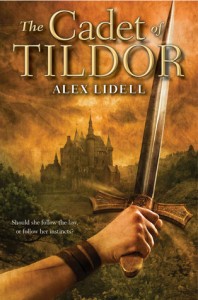 Title: The Cadet of Tildor

There is a new king on the throne of Tildor. Currents of political unrest sweep the country as two warring crime families seek power, angling to exploit the young Crown’s inexperience. At the Academy of Tildor, the training ground for elite soldiers, Cadet Renee de Winter struggles to keep up with her male peers. But when her mentor, a notorious commander recalled from active duty to teach at the Academy, is kidnapped to fight in illegal gladiator games, Renee and her best friend Alec find themselves thrust into a world rife with crime, sorting through a maze of political intrigue, and struggling to resolve what they want, what is legal, and what is right.

Stand alone or series: Stand alone (but with so much potential for a series)

How did I get this book: I got a review copy via Netgalley

Why did I read this book: Because it’s a Fantasy book with a female protagonist struggling to become a freaking soldier. I HAD to check this out.

It is almost impossible to approach The Cadet of Tildor without sky-high expectations as it has been touted as a meeting of heavy-weight Fantasists Tamora Pierce and George R. R. Martin. To be honest, those expectations are not exactly fair considering this is a debut novel and as such appropriate adjustments are necessary – once this is done The Cadet of Tildor becomes a solid, enjoyable-if-flawed YA Fantasy.

Renee de Winter is a cadet at the Academy of Tildor, the training academy for elite soldiers that serve and protect the kingdom. As the story opens, Renee is given an ultimatum by her father: either she quits the Academy to live a life more appropriate for a girl or be banished from their household. Renee decides to follow her dream to serve her kingdom and to carry on at the Academy, despite all the hardships she faces there: as a woman, Renees finds herself constantly struggling to keep up with her male peers on the more physical aspects of her training. But giving up is not an option and when Commander Korish Savoy – a famous officer and her idol – joins the Academy as a teacher, she hopes he will help her achieve the excellence she needs to remain a cadet.

Savoy is not happy with his new instructions – which come from the top – as he is pulled from active duty to pamper kids in training, especially with Tildor in the midst of political turmoil with a new king on the throne, two criminal families vying for power and a threat from mages looming in the horizon. When Savoy’s little brother is kidnapped, Renee and her best friend Alec quit everything to go after the boy and join Savoy on his search.

And this doesn’t even begin to cover The Cadet of Tildor, a book so eventful that at one point Savoy is kidnapped and enslaved to become a gladiator. Yes, for reals. The truth is that the plot is extremely convoluted with many storylines happening and a variety of threads and secondary characters that unfortunately are as not as fleshed up as they should/could have been. There is enough juice here for an entire trilogy (which could have been awesome) and there is a lot that is packed in on just 400 pages resulting on underdeveloped storylines. Add to that an often stilted fake-medieval dialogue and the fact that Super!Soldier! Savoy (who shares the narrative PoV with Renee) does not sound like a 23 year-old at all [1. It also doesn’t sound like it would be possible for such a young man to be at such high level within the army already even considering how awesome the Academy is supposed to be and I often wondered if Savoy was written as a much older character to begin with and his age was brought down to make it more compatible with YA and with a possible romantic storyline with Renee) and we have serious problems overall.

My misgivings out of the way, there is actually a lot that is pretty awesome about the book.

Renee for example, is an incredibly interesting and complex protagonist and her arc is pretty engaging from start to finish. Her struggles in the Academy as a woman is one that I found very well done, depicting her very real problems with her physical weakness which she worked at continuously and managed to overcome by both increasing her training hours and by addressing it in more creative ways. I loved that she never becomes Super!Strong! but that she learned to train more, to dedicate the hours it takes to become a skilled fighter, to fight with her own physical abilities and to use weapons that suited her. I wish I had seen more female characters going through the same thing at the Academy so that I wouldn’t think that Renee was such an exception but there were extremely capable women in leading roles in the army (meaning that they have been through training and made it). Above all I loved her emotional arc: Renee starts out the book as a rigid, inflexible character that made very serious mistakes in terms of her actions and her behaviour. As a character she is allowed to be fallible and I loved that complexity. As such she suffers the consequences of her actions and eventually learns from them to become a more flexible person that thinks before acting.

This dichotomy of flexible vs inflexible is actually a big theme in the book overall as the chaotic political background turns out to be not as rigidly black and white (or good and evil) as Renee thought. As it turns out, in life and in politics, it is all about adapting.

I also loved Renee’s relationship with Savoy – it was hero-worship and attraction to begin with then developing into friendship and camaraderie. The fact that theirs is a mentor-student relationship and that Renee is 16 to Savoy’s 23, removes any potential romantic storyline from the picture (at least for now) and I am happy that the storyline never took them there (although there is definitely potential for this to change at some point in the future once they become equals).

In spite of my misgivings, there is a lot to recommend here especially if you like Fantasy with well-written, complex female protagonists. I’d definitely go back for seconds – heck, I want a sequel.

No quotes, but you can read an excerpt HERE.