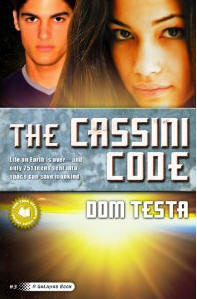 When the tail of the comet Bhaktul flicks through the Earth’s atmosphere, deadly particles are left in its wake, and mankind is confronted with a virus that devastates the adult population. A renowned scientist proposes a bold plan: to build a ship that will carry a crew of 251 teenagers to a home in a distant solar system. Two years later, Galahad and its crew is launched. If their mission fails, it will be the end of the human race…

The teenage crew of Galahad has survived their first encounter with an alien race. Though shaken by the power of The Cassini, Triana and her Council are determined to continue their mission. But some of the crew don’t agree. Led by the charismatic Merit Simms, a small group of crew members begins lobbying for a return to Earth—just as the ship enters the Kuiper Belt, the deadly minefield of asteroids that surrounds the solar system.

As Galahad dodges a storm of asteroids, Triana finds herself dealing with an increasingly hostile crew. Even some members of the Council are beginning to listen to Merit’s arguments. Can Triana find a way to prevent a mutiny aboard Galahad, and lead her crew to safety?

Stand alone or series: Book 3 in the Galahad Series

Why did I read this book: I truly enjoyed books 1 and 2 in this series and am gradually making my way through the Galahad books. Plus, I had just finished reading the depressing, underwhelming The Explorer and desperately wanted to get a better fix of deep space exploration scifi.

The noble ship Galahad has survived a madman stowaway, the onslaught of an alien signal broadcasting from Saturn’s moon Titan, but now faces its most daunting task yet – navigating the minefield of dangerous objects strewn throughout the Kuiper Belt before leaving the Solar System.

While it’s hard enough to manage the many technical and engineering aspects of the ship and successfully evade the larger Kuiper Belt Objects, Triana also finds her leadership challenged by an unlikely crew member. Merit Simms, a dangerously charismatic and manipulating mastermind, starts stirring up trouble and builds a contingent of followers to unseat Triana and turn Galahad around and head back to Earth. While Triana and her fellow Council members know that heading back to Earth is a sure death sentence, Merit’s numbers grow each passing day as the ride through the Kuiper Belt becomes increasingly dangerous. Merit’s gospel of fear of the unknown and baseless hope that the Cassini have cured Bhaktul starts to gain serious ground – and Triana and the council face the very real possibility of mutiny.

The only way to put a stop to Merit’s rabble rousing is to make contact once again with the Cassini, and hope they can convince the 251 souls aboard the Galahad that the only possible future lies on the distant planet of Eos.

The third book in the Galahad Series, The Cassini Code is an enjoyable if predictable (and at times a little bit silly) romp. The further I get into this series, the more it feels like a television series. It’s kinda like…Jericho or even The Walking Dead. I thoroughly enjoy both shows, but the twists are fairly textbook and proceed by a familiar code: You have a small group of survivors under enormous strain, which will play out in both external and internal threats. We’ve already seen external threats, as the impetus for the series (the Comet Bhaktul and the disease that is its legacy, and in the second book, the Cassini signal that incapacitated many crew members). This particular episode is the one that features tensions from within, as a power-hungry manipulator stirs up trouble against our intrepid heroes. This isn’t a bad thing, by any stretch of the imagination! Dom Testa expertly creates a character that we love to hate in the figure of Merit Simms.

My biggest disappointment with The Cassini Code, however, was that Merit became a true bad guy kind of character. Although, in the end, it turns out Merit is acting out of his own deep fear and desire to go home to be with his family, the manner in which Triana and Gap are able to dissolve his amassed power feels kind of an easy way out.[1. If you want The Walking Dead analogy, it’s kind of like the way The Governor is disappointing in his badness.] How much more interesting would it have been to have Merit not resort to criminal actions to prove his case? How much more interesting to have Triana, Bon and Gap figure out a way to discredit his arguments without having an easy way out?

That major piece of criticism stated, I did still very much enjoy the book overall. As always, I love Triana as the leader of this brave young crew and her levelheadedness, just as I love the entanglements that unfold as other Council members grapple with homesickness, power struggles, and hormones.[2. Ok, I was not very happy with the way Gap is treating his unresolved emotions and his attitude towards Hannah. Blergh.] From an overall plot and series arc perspective, however, is where things get really interesting – I love the developments with the Cassini and the new implications for two characters in future books (Bon especially). I really just want to know what happens next, once our crew emerges beyond the Kuiper Belt, because we now know one thing is for certain:

Our intrepid crew is not alone. And I cannot wait to see what they will face as they make their way into the dark reaches of unexplored space.

The warning siren blared through the halls, running through its customary sequence of three shorts bursts, a five-second delay, then one longer burst, followed by ten heavenly seconds of silence before starting all over again. There could be no doubt that each crew member aboard Galahad was aware—painfully aware—that there was a problem.

He stood, hands on hips and a scowl etched across his face, staring at the digital readout before him. One of his assistants, Ramasha, waited at his side, glancing back and forth between the control panel and Gap.

“Please shut that alarm off again, will you?” he said to her. “Thanks.”

Moments later a soft tone sounded from the intercom on the panel, followed by the voice of Lita Marques, calling from Galahad’s clinic.

“Oh, Gap darling.” He sensed the laughter bubbling behind her words, and chose to ignore her for as long as possible.

“Gap dear,” she said. “We’ve looked everywhere for gloves and parkas, but just can’t seem to turn any up. Know where we could find some?” This time he distinctly heard the pitter of laughter in the background.

“Are you ignoring me, Gap?” Lita said through the intercom. “Listen, it’s about sixty-two degrees here in Sick House. If you’re trying to give me the cold shoulder, it’s too late.” There was no hiding the laughs after this, and Gap was sure that it was Lita’s assistant, Alexa, carrying most of the load.

“Yes, you’re very funny,” Gap said, nodding his head. “Listen, if you’re finished with the jokes for now, I’ll get back to work.”

Reading Next: Cinders and Sapphires by Leila Rasheed