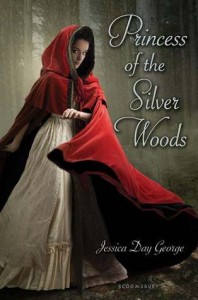 Title: Princess of the Silver Woods

When Petunia, the youngest of King Gregor’s twelve dancing daughters, is invited to visit an elderly friend in the neighboring country of Westfalin, she welcomes the change of scenery. But in order to reach Westfalin, Petunia must pass through a forest where strange two-legged wolves are rumored to exist. Wolves intent on redistributing the wealth of the noble citizens who have entered their territory. But the bandit-wolves prove more rakishly handsome than truly dangerous, and it’s not until Petunia reaches her destination that she realizes the kindly grandmother she has been summoned to visit is really an enemy bent on restoring an age-old curse.

The stories of Red Riding Hood and Robin Hood get a twist as Petunia and her many sisters take on bandits, grannies, and the new King Under Stone to end their family curse once and for all.

Stand alone or series: Book 3 in the Princess Trilogy

How did I get this book: e-ARC from the publisher

The twelve princesses of Westfalin are back in Princess of the Silver Woods – and out to face the bitter enemies of their childhood once again, once and for all. Petunia is the youngest of all twelve princesses, and has always been treated as the little girl, the baby, the child that needs protecting and coddling. But Pet is anything but a hapless little girl – now sixteen years old, though small in stature, the youngest princess of Westfalin has enough gumption and courage to measure up to her brassiest older sisters. When she travels to visit the Russaka Grand Duchess Volenskaya at her country estate, Petunia’s coach is held up by the much afeared Wolves of the Westfalian Woods. Abducted and taken in by the Wolves’ leader, Petunia learns much about the bandits feared throughout the kingdom – they are actually a ragtag group of men, following the displaced teenage Earl Oliver Saxeborg-Rohlstein, whose lands were lost following the Analousian war. In order to feed his people and keep them safe, Oliver has taken to stealing from well-to-do coaches traveling the woods – in other words, stealing from the rich to feed the poor. His mother, a former lady-in-waiting (and fellow Britton) to the late Queen, insists that Oliver safely escort Petunia on her way to the Duchess Volenskaya’s home, which he grudgingly does. Not all is well at the Duchess’s home, however, as Oliver sees mysterious shadowy figures roaming the estate grounds at night, attacking Petunia’s room.

Determined to help the princess, and finally deciding to take his Earldom back no matter what the consequences, Oliver travels to the palace and informs the king that he is the leader of the Wolves, guilty of robbery and abducting her royal highness – but also warns that some evil is befalling the King’s youngest daughter.

And, as it turns out, that evil affects every last one of the Princesses of Westfalin. Nightmares haunt the sisters, in which they are forced to dance all night, every night with their shadowy suitors, the sons of the King Under Stone. Even though Rose and Galen defeated the first King Under Stone and sealed his realm, the new King and his brothers are finding ways to escape their prison. It is up to the unlikely Petunia, her new friend Oliver, and all the friends that the princesses have made over the years to escape the Under Stone realm once and for all.

The third and final book in the trilogy, Princess of the Silver Woods takes the Westfalian sisters back to where it all began and makes the girls confront the realm of Under Stone for one last showdown. Using the familiar elements of Red Riding Hood (sort of) and Robin Hood (sort of), this ultimate installment follows an unlikely pair in the young Petunia and her love interest Oliver. While I like the air of finality to this book, Princess of the Silver Woods is decidedly my least favorite of the trilogy – in part because of its insta-love-y lead pair, in part because it negates the purpose of the entire second book, in part because the story, while engaging, still feels somewhat sanitized and safe.

On a character front, Petunia is my least favorite of the series heroines, though not really through any fault of her own. She’s brave and kind-hearted, she stands up for herself and feels like a believable youngest sister that is sick and tired of being coddled. That said, Petunia is also irritatingly cliched, from her slightly petulant attitude to her dainty little body and extreme beauty. Seriously, Oliver sniffs her a couple of times (in complete stalker fashion, I might add) and comments on Petunia smelling of cinnamon and roses – because that is just how she smells. Oookay. Of course, the fact that Petunia is so adorable and irresistible is hardly her fault – but her personality also comes across as somewhat thin and predictable. She doesn’t question the strange things that happen around her, nor does she put together the pieces of the mystery of who is working with King Under Stone until the villains unveil themselves to her. Oliver is a more palatable character – although the love that blossoms between him and Petunia is ridiculously trite, I like that Oliver at least admits to himself (and to the King) that his motivation for finally attempting to regain his Earldom and turning himself in is not wholly because of Petunia; instead, his motivation is the fact that he’s finally old enough and ready to take responsibility for his life. Which is refreshing. That said, Oliver displays some of my least favorite traits in a hero on occasion, too – sneaking into Petunia’s room, hiding under her bed, gingerly planting a kiss on her cinnamon and rose scented hair while she’s asleep (and they are still strangers at this point, having only seen each other twice).

From a story perspective, things are a little better. I love that things come full circle quite nicely in this final book, with the girls having to face their greatest fears once again (having not fully defeated Under Stone the first time around). The only regret I have is that the fact that this book goes back to the realm of Under Stone basically negates the entire relevance of the second book in this trilogy! Poppy is a strong presence here, but her husband-to-be Christian is absent for the entire novel. There’s no further mention of the Corley, of any of the actions or characters from the second book. It’s puzzling, and perhaps all the more glaring as I just finished reading Princess of Glass a few days before Princess of the Silver Woods. Also mystifying was the lack of fairy tale integration in this third book – whereas Princess of the Midnight Ball was a retelling of the twelve dancing princesses, whereas Princess of Glass is a fantastic twist on Cinderella, Princess of the Silver Woods is…not. It continues in the same world as the Twelve Dancing Princesses, it has a dash of Robin Hood (in that Oliver steals from the rich to feed his people), I guess one could say it has a touch of Red Riding Hood (in that Pet wears a red cloak…and Oliver wears a wolf mask…), but the tie is tenuous indeed. The more interesting fairy tale here, to me, was the story of the Nine Daughters of Russaka – nine sisters locked in a tower by their father the King, who each give birth to sons on the same night after being seduced by the same sorcerer. (Guess who? Yeah, it’s obvious, right? Not to Petunia though.) Needless to say, I wasn’t quite convinced by the fairy tale-ish aspect to this book, though I must give Jessica Day George credit because her writing is as beautifully even handed and wonderful as ever. Even with the more frustrating aspects of the characters and plot – namely the lack of any true danger or intensity facing these beautiful, resourceful princesses and suitors – Princess of the Silver Woods is a well-spun, engaging tale.

Ultimately, I enjoyed this book and the trilogy overall – but I wanted to love it. I have yet to discover that truly amazing, knock-your-socks-off, love-it Jessica Day George book, but I’m determined to give her another shot.

Reading Next: In a Glass Grimmly by Adam Gidwitz