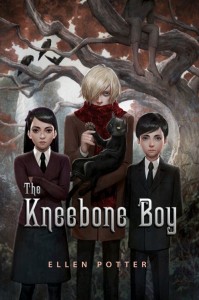 Life in a small town can be pretty boring when everyone avoids you like the plague. But after their father unwittingly sends them to stay with an aunt who’s away on holiday, the Hardscrabble children take off on an adventure that begins in the seedy streets of London and ends in a peculiar sea village where legend has it a monstrous creature lives who is half boy and half animal. . . .

In this wickedly dark, unusual, and compelling novel, Ellen Potter masterfully tells the tale of one deliciously strange family and a secret that changes everything.

Why did I read this book: I had my eyes on this book since it came out because seriously…the cover is awesome. I then read the author’s The Humming Room and even though there were many things I enjoyed about it, I ended up slightly disappointed which is why I put off reading The Kneebone Boy . Big mistake. As it just so happens, The Kneebone Boy
is everything I wanted The Humming Room to have been. And more.

In this charming Adventure/Quest story, a narrator with an engaging voice tells the tale of three children as they go on an adventure, have many mishaps and learn a secret about their family.

There are three Hardscrabble children. Otto, the oldest, doesn’t speak and communicates via invented hand signs; he also wears a scarf around his neck at all times. Lucia is the one in the middle, with a love for adventures and the only one that can understand Otto completely. Max is the youngest, the forever optimist and quite frankly, the cleverest of the trio.

The children live with their father in the small town of Little Tunks in England where the family have an unfortunate, infamous reputation ever since their mother mysteriously disappeared. Lucia says she is dead. Max says she is missing. Otto doesn’t say anything as per usual although that might be because he is keeping a secret (although Lucia would tell you that it is inconceivable that Otto would keep a secret from her).

This story is brought to you by one of them although you don’t ever know which one is narrating it because the story belongs to all three of them. You can certainly try to guess though (I did and I am pretty sure I know who is narrating it. But I could be wrong. Maybe).

It starts when their father must go on one of his long trips (he is a painter of disgraced royalty portraits) and sends them to stay with a relative in London who turns out to be away on holidays. The children decide this is their best chance to go on an Actual Adventure (ok, maybe not all of them. Maybe it is only Lucia who thinks so). And so the children brave the scary streets of London and eventually end up in a little town by the sea where there is a Castle Folly full of secrets and where, according to legend, the half-beast Kneebone Boy roams the woods.

Look at this cover. It is now one of my favourite covers of all time because it is not only very pretty but also extremely accurate in how it conveys the children’s personalities brilliantly. These are Otto, Lucia and Max (and Chester the cat). Of course, a good cover means zilch if the content sucks but in this particular case, the book is so good, this cover complements it beautifully, essentially creating a Package of Awesome.

And how I could I not enjoy a story that not only features beautiful prose, a clever storyline (with clues throughout and things that are left unsaid but which are so obvious) and insights like:

“All great adventures have moments that are really crap.”

But also one that features an incredibly beautiful and poignant portrayal of sibling relationship. It’s in how they obviously deeply care for each other at the same time that they bicker and fight like siblings tend to do. It’s in the close relationship between Lucia and Otto and how the two understand each other at the same time that it shows that often, even when you deeply love and understand someone, you might still not know everything about them.

And how utterly interesting that the most vulnerable child is the oldest one and how his two younger siblings are constantly looking out for him. How completely devastating to notice that even though they absolutely love Otto, Max and Lucia also somewhat mistrust him – and those tiny moments of uncertainty are heart-breaking for all of the involved.

And in the end, beyond the truths they have unveiled or the many adventures that the Hardscrabble children had, this is truly a story about strengthening the bonds between them.

It’s also in the best possible way: a story that is over-the-top and odd, reminding me of old-fashioned children’s books.

A little Package of Awesome indeed.

The excerpt below is a good indication of the narrative tone of the book:

There were three of them. Otto was the oldest, and the oddest. Then there was Lucia, who wished something interesting would happen. Last of all was Max, who always thought he knew better. They lived in a small town in England called Little Tunks. There is no Big Tunks. One Tunks was more than enough for everyone. It was the most uninteresting town imaginable, except for the fact that the Such Fun Chewing Gum factory was on its west end, so that the air almost always smelled of peppermint. When the wind blew just right you could think you had been sucked down a tube of toothpaste.

I was the one voted to tell this story because I read the most novels, so I know how a story should be told. Plus I’m very observant and have a nice way of putting things; that’s what my teacher Mr. Dupuis told me. I can’t tell you which Hardscrabble I am—Otto, Lucia, or Max—because I’ve sworn on pain of torture not to. They said it’s because the story belongs to all three of us, and I suppose they’re right, but it seems unfair since I’m doing all the work. No one can stop you from guessing though.

The story will begin on a sparkling, sun-drenched afternoon in July. I think that’s a good time to start because everything is so nice and pleasant at that time, with flowers blooming and birds singing and all that rubbish. You have to start nice and pleasant before you get to the more heart-thumping bits, in which the weather turns nasty and so do the people. And also, the story actually did start on a sparkling, sun-drenched afternoon in July, so I wouldn’t be lying.

On a sparkling, sun-drenched afternoon in July, when the flowers were blooming and the birds were singing, Otto and Lucia were walking home from school arguing about what they were going to do when they grew up.

“Well, that’s fine for you. You’ll be the one drawing skeletons and tigers on people’s bums,” said Lucia, who incidentally looked exactly like her name. If you don’t know what I mean, just picture long, thick, black hair that needs loads of shampoo to make a lather; a delicate, proud nose; and beneath two unapologetically thick eyebrows, dark eyes that were endlessly searching for something interesting to happen. If you think she sounds suspiciously heroine-like, be advised that she has flaws. She had a terrible sense of direction, fought quite a lot with Max, and was on the short side.

Reading Next: The Peculiar by Stefan Bachmann