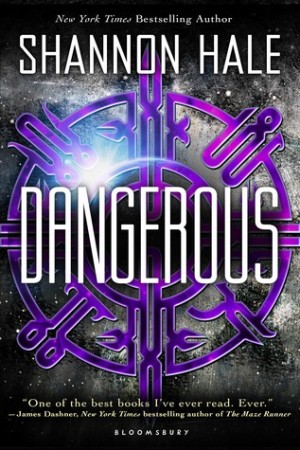 Maisie Danger Brown just wanted to get away from home for a bit, see something new. She never intended to fall in love. And she never imagined stumbling into a frightening plot that kills her friends and just might kill her, too. A plot that is already changing life on Earth as we know it. There’s no going back. She is the only thing standing between danger and annihilation.

Why did I read this book: I am a big fan of Shannon Hale’s – I’ve read and reviewed all of her books of Bayern (and her lovely Princess Academy duology) here on The Book Smugglers. Naturally, I was over the moon when I learned she was writing a science fiction novel!

I don’t quite know where to begin when reviewing Dangerous. This novel is actually three novels crammed into a single volume – it’s a story about a smart young woman who wins a trip to an exclusive astronaut camp and earns a chance to head up Earth’s space elevator. It’s also the story of that same young woman and her friends as they become gifted/cursed with incredible superpowers and who are pitted against each other by adults with their own agendas, hungry to control said powers. Finally, Dangerous is the story of an alien invasion, and the one person who can stop everything from tumbling down.

That is a lot of material to pack into a single novel. To Shannon Hale’s credit, I loved Dangerous – as discombobulated as the novel is, it works. Mostly. But I’m getting ahead of myself… Let’s start with the story:

Maisie Danger Brown – yes, Danger is her middle name – is a smart, confident young woman who decides to enter a longshot sweepstakes to go to a prestigious astronaut boot camp. Since she’s not particularly rich or well connected, not to mention that she was born with just one arm, Maisie knows her chances of ever becoming an astronaut (or even getting accepted to camp) are infinitesimal. Imagine her surprise, then, when Maisie receives the news that she has won one of the coveted space camp spots! Soon, Maisie is trying to fit in with her fellow space campers (some people are bigoted jerks about her arm, but she also finds and makes friends) and even catches a romantic interest while she’s at it.

Things go awry, however, when Maisie and her team of 5 are given the chance to ascend the space elevator into low earth orbit – and suddenly, thanks to alien technology, she and her fellow fireteam members will never be the same again. Gifted with unique powers – strength, super shielding, an overarching sense of interconnectedness, the ability to shoot projectiles and never miss, and the ability to understand and rebuild technology – Maisie and her fellow teens try to work together, but find themselves pitted against one another by larger forces. Facing threats from adults who want to control her powers and from her former friends and teammates, Maisie and her family are on the run. But even with her enhanced physical abilities, Maisie can’t outrun the alien threat that promises to destroy her planet and all she holds dear…

As you can see, Dangerous has a whole lotta stuff going on. And because there’s so much going on, plus the fact that the official description for this book is so vague, I think this immediately puts Dangerous at a disadvantage. Certainly, going into the novel, I did NOT get the space camp-turned Fantastic Four-turned Invasion of the Body Snatchers kind of vibe. But that’s what Dangerous is. Mispackaging and marketing of the book aside (because from the cover to the description of the book, this novel clearly needed a different direction), Dangerous succeeds because it’s written zippily, it stars a fantastic main character, and it is exuberantly unapologetic in its over-the-top plotting. Suffice it to say, I liked it. I liked it a lot.

So let’s start with the best part, shall we? Maisie Danger Brown – a superhero name if ever there was one – is freaking fantastic. A biracial, bilingual latina, born with one arm, Maisie is intelligent, confident, and brave. More than that, she reads and feels like a real, genuine character; one who makes mistakes and goes against her own better judgment at times, but who strongly believes in right and wrong and using her abilities for good.

On that note, through Maisie’s eyes, I loved the examination of power in this book: in particular, how the powers Maisie and her fellow fireteamers develop can consume them, in a very comic book tropish kind of way. Immediately, I’m reminded of two Marvel heroes: Peter Parker (the “with great power comes great responsibility” homily) and Steve Rogers (of the recent films, whose inner strength is magnified by Abraham Erskine’s super serum – in contrast to Red Skull’s inner badness). In Dangerous, people aren’t simply “good” or “evil” – they are flawed characters who are given enormous responsibility, and who are reduced to pawns in a much larger game. These are young tweens and teens who have only started to grow up, and some have horrible, horrible home lives that have shaped their desire for and use of power – and the lack of responsibility or moral code accompanying that power. While Maisie is more successful than her fireteam friends, she’s also luckier than most: she has a loving family that doesn’t question her story, and who will do anything to keep her safe. This, the question of nature and nurture, is another interesting theme in Dangerous and it’s important to note that both physiological nature (bilingual adolescent candidates whose developing minds are more malleable to alien technology) and nurture (home backgrounds, supportive or abusive families and friends) play important roles.

On the negative side, however, Dangerous is a sprawling novel that is essentially three story arcs condensed into a single book. While the writing is sure-handed and very zippy, it’s also incredibly fast-moving – to the detriment of certain character and plot developments. And, while I appreciate a standalone SFF novel, this book probably should have been made into a duology (or trilogy!) in order to flesh out some of the huge developments along the way. In particular, I would have liked to see more of Maisie and her interactions with her mother (who disappears halfway through the book), or more of Maisie and her best friend Luther, or any additional backstory for her ill-fated teammates Ruth, Jacques, and Mi-sun. We know anecdotal things about these characters and certain deep, traumatic reveals are made for each – but we sadly don’t get to spend much in-depth time with them, which is a shame.

And then there’s the romance angle with Wilder. There’s some negativity out there in review land, but my opinion of Wilder and Maisie’s relationship is, overall, a positive one. Not because the romance is great, or constructive, or even healthy, but because it felt true (in this reviewer’s opinion). It’s been a while since I’ve read a romantic interest in an SFF novel (YA or otherwise) that has felt real. Typically, things tend to be very dramatic, in an I will love you forever overwhelmingly over-the-top kind of way. In Dangerous, this epic yearning is scaled back to smaller, human-sized proportions, and it resonates as more genuine because of that restraint. It’s also worth noting that Dangerous‘s romance is not necessarily a good romance – sometimes you fall for the wrong person, and the guy that Maisie falls for is wrong for so many reasons (and she knows it, too, which is another nice surprise). I like that kind of fatalism, and I appreciate the complicated, real-life dynamic of first crushes and first loves. (On a slightly spoilery note, I can’t say I’m happy with the way the book ends, but… I can live with it.)

Dangerous is a brutal, fast-paced, hodgepodge of a science fiction novel… but despite its messiness, I kinda loved it. Recommended, especially if you’re looking for something fast-paced and surprising this summer.

Every superhero has an origin story. Mine began with a box of cereal.

“Mom?” I said, pulling a box of Blueberry Bonanza out of a grocery sack. “Really?”

I’d like to say I was helping her unload the groceries because I’m that wonderful. In fact it was an excuse to escape. When she’d returned from the store, I’d been working on Accursed Geometry.

“They were on sale,” Mom said. “I thought you’d like to try something different.”

I opened the box and poured some “Fruitish Nuggets and Marshmallow Fun” into my hand to show her.

“Guácala,” I said. The Spanish word for gross sounded so perfectly gross.

I was going to put the cereal in solitary confinement on a high shelf when I noticed the words “Astronaut Boot Camp” on the back of the box:

“Thanks for the spontaneous help,” Mom was saying as she put away the fridge items. “Am I correct in assuming I’m saving you from geometry?”

“Now, Mom, you know I find nothing so thrilling as calculating the area of a triangle.”

I shelved the box, too ashamed to show Mom the sweepstakes. Since I was five I wanted to be an astronaut. But little kids always dream of being astronauts, princesses, or spies and then grow up to realize that’s impossible. I should have outgrown my space fantasy by now.

Reading Next: The Bees by Laline Paull

Book Review: In the After by Demitria Lunetta

Book Review: The Hero’s Guide to Saving Your Kingdom by Christopher Healy