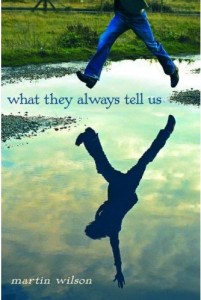 Title: What They Always Tell Us

James: Popular, smart, and athletic, James seems to have it all. But the only thing James really wants is his college acceptance letter, so he can get far away from Alabama after high school. He’s tired of the same old parties; the tennis team; his so-called girlfriend, Alice; his ex, Clare – and especially his quiet younger brother, Alex. In a town where secrets are hard to keep, everyone knows what Alex did at the annual back-to-school party. The only question is why.

Alex: With his friends no longer talking to him and his brother constantly in motion, Alex is prepared to get through junior year on his own. And he would, if his ten-year-old neighbor, Henry, didn’t keep showing up, looking for company. Even James seems intrigued by Henry, and by the strange cars that come and go from his house across the street. But what Alex cares most about is running, and when he’s encouraged to try out for cross-country, he’s surprised to find more than just a supportive teammate in his brother’s friend Nathen.

Thoughtful and moving, What They Always Tell us is a powerful debut novel about the bond between two brothers – and the year that changes everything.

Why did I read this book: I first heard about Martin Wilson when I read his essay included in the new edition of I’ll Get There. It Better Be Worth the Trip by John Donovan. I liked what he wrote and immediately bought a copy of his own book.

“Sticks and stones may break your bones, but words can never hurt you.”
“Yeah, that’s what they always tell us.”
“But it’s not really true, is it?”
“Not really. Lots of things they tell us aren’t true. A lot of what they tell us is garbage.”
“Then why do they tell us stuff like that?”
“I don’t know.”

What They Always Tell Us is a wonderful, beautiful story about two brothers who were once very close, then drifted apart and slowly find their way to each other. The story is told in alternating chapters from each brother’s perspective and it follows both throughout this one year in their lives.

Alex is the youngest one, the quiet, solitary brother who’s been dealing with the repercussions of drinking Pine Sol one day at a party and ending up in hospital. Ever since then, his friends have disappeared, his parents treat him with extreme caution and his brother simply doesn’t seem to care. All Alex wants is to feel right again and things start to look up when he strikes two unlikely friendships: first with his 10 year old neighbour Henry and then with one of his brother’s best friends, Nathen. Henry is the one who reminds him what is like to have a brother but Nathen is the one who helps him grow up and the one who eventually becomes more than just a friend. Ah, l’amour.

The older brother, James, is a senior about to graduate and go to college. He is a top student, a great athlete, a very popular kid who is always surrounded by friends and girlfriends. He is also SICK of it all, bored with all the parties. He can’t understand why his brother did what he did and now all that he wants is to get the hell out of Alabama.

What They Always Tell Us is a quiet story. It progresses very slowly and the nature of its storytelling is more like a gentle breeze rather than a violent storm but no less effective for that. It is hard to express how well the author managed to take such charged topics like suicide and coming out and explore them in such a gentle manner. This gentleness (there is no better word for it) is in the way that Alex’s suicide attempt is revealed to the reader, the reasons behind it and how Alex feels about it. He knows it was a mistake and he’s been trying to atone for it ever since. But more than that, he’s been trying to understand it, to understand his feelings and yes, coming out as queer is part of it but it is not all of it and I hugely appreciated how the author treated this as part of who he was but not all that he was. His identity is about more than that: there is his surprise at being a good athlete, his passion for running, his friendships, his family and his relationship with his brother and yes, also his falling in love with Nathen. Although the potential complications of the latter are not glossed over – after all, this is Alabama – there is a lovely easy acceptance about their feelings for each other and it is ever so romantic (and also, hot).

Meanwhile, we have James. Who at first comes across as a tremendous sexist jerk and I wanted to punch him in the face with my Fists of Fury. He treats girls in the most horrible manner, he is whinny in his boredom with his life, he is angry with people he shouldn’t be angry with and it feels as though he is frozen in limbo. It was hard to warm up to James to start with but soon enough it becomes clear how affected he was by his brother’s suicide attempt and perhaps, just perhaps all of those feelings are a result of a pent-up anger at himself. His character arc is perhaps more obvious and less gentle than Alex’s and when the moment comes when James FINALLY gets angry with those who deserve his anger (and that includes himself) and realises how important his brother is, it is the sort of victorious, triumphant moment that made me want to fist pump and celebrate. He also becomes a better person in the end (although I have to say, I hoped his sexism would have been addressed more directly).

What They Always Tell Us is a story about brothers and about coming out. But I think that above all, this is a delicate exploration about what it means to be happy and how fleeting happiness can be. It is an effusive feeling? It is subtle? How much does happiness depend on external factors or internal ones? How much do other people affect your ability to be happy – or add to it? All characters to one extent or another are trying to understand what make them happy and trying catch it whenever them can, knowing that there are also shitty things that happen in life. There are no easy answers, there are no fixed outcomes but in the end Alex and James found each other again and as brothers and friends, they can face anything together.

I had such a taste of that elusive happiness when I read this book and I know it is not of the fleeting kind. This is the sort of book with the sort of characters that simply …stay.

Notable Quotes/Parts: I loved the quote that I included at the start of the review. It was one of my favourites. But my two favouritest parts were:

1) The first kiss between Alex and Nathen (which is also Alex’s first time kissing another guy): it was hot and it was awesome. And Alex muses:

This is different. It’s not mechanical. It’s not a joke. It feels right. He’d do it forever, if he could. He realises it is how a kiss is supposed to feel.

2) The scene in which James FINALLY decides he needs to be there for Alex and be a big brother. Alex cried, James sobbed, I bawled.

Over at Kirkus: Company Town by Madeline Ashby