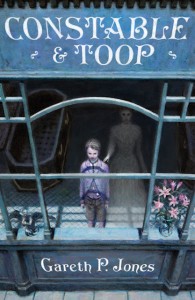 Sam Toop lives in a funeral parlour, blessed (or cursed) with an unusual gift. While his father buries the dead, Sam is haunted by their constant demands for attention. Trouble is afoot on the ‘other side’ – there is a horrible disease that is mysteriously imprisoning ghosts into empty houses in the world of the living. And Sam is caught in the middle – will he be able to bring himself to help?

Why did I read this book: I’ve had my eyes on this book for a while as I tend to love all the different things it encompasses: Gothic, Mystery, Historical, Middle Grade.

Sam Toop lives in a funeral parlour with his father and this proximity to death is thought to be the reason behind Sam’s ability to see ghosts. As a Talker, he is constantly sought after by hopeful spirits wanting to put their affairs in order with Sam’s help. He is not very keen about it especially when he ends up helping the wrong sort of people.

On the “other side”, over at the Ghost Bureau, it is business as usual as long-dead clerks take care of Ghosts and Apparitions, setting up all the necessary documentation they need in order to be Legal Ghosts of London. But then, minor bureaucrat Lapsewood gets entangled in a dastardly plot as the terrible Black Rot spreads around Haunted Houses after their Ghosts mysteriously disappear.

In the meantime, a demon hound haunts the streets of London after being set free by the works of an exorcist bent on ridding London of its demons.

Inspired by Victorian’s preoccupation with mourning rituals, Constable and Toop is a paranormal Mystery novel set in Victorian London, a place for the poor and the rich as well as the living and the dead.

Constable and Toop offers an incredibly competent blend of mystery and paranormal especially with the way that several different threads and themes are expanded and elaborated on to form a cohesive whole. The chapters alternate between several characters’ point of view and as the story progresses, more of those are added. It is impressive how this is done with aplomb as this ever increasing number of characters and storylines never seem excessive or superfluous (although some of those threads are unfortunately a bit superficially dealt with).

It addresses life in London, the life of the poor and of the well-off, of the honest and the dishonest. There is also the life in the afterlife, and how gloomy it can be for those who never crossed over and stayed behind for different reasons. I loved the after-life world that the author created and its mixture of boring bureaucracy (firmly rooted in the Real Life, of course) and hopeful future. The storyline involving Sam’s family and its secretive past is also another highlight of this novel. There is a little bit of horror, a little bit of romance as well as a little bit of comedy.

Unfortunately, despite of its obvious positive aspects what struck me the most about Constable and Toop is how extremely male-centric it is. There are many point of view characters but apart from exactly one – a little girl named Clara – all of them are male. Even within each particular character’s storyline, the vast majority of their interaction is with other male characters. And when they do interact with female characters these invariably turn out to be either objects of their romantic interest, murder victims or appendixes to the male character’s arc. Which is a shame, because the little I saw of Clara and her drive to be an investigative journalist and a writer, was actually awesome. Nothing frustrates me more than having to say in a review “but where are all the women” because frankly, I shouldn’t have to.

All in all, a solid yet frustrating read.

Sam glanced at his uncle. He had no desire to reveal his gift to him. He tried to ignore the ghost but she continued to go on. ‘They say you’re a Talker. You can hear and see us. They say you’ll help us. Please help me. I must tell my Tom not to marry her.’

Sam disliked the maudlers and the mopers most of all, always coming to him, begging for help. At least this one was pretty. A few years older than Sam, twenty perhaps, but even in death he could see she had been a beauty.

He shifted his eyes to indicate that he would speak with her outside, then poured a ladleful of soup into the bowl and placed it back in front of his uncle.

‘You shouldn’t listen to your old man,’ said Uncle Jack. ‘We used to be as thick as thieves, me and him. I don’t know what he’s said about me before, but every story has two sides. Most have more.’

Jack swallowed a mouthful of soup. ‘This tastes better now, lad. You’ll make someone a good wife some day.’ He laughed. ‘Oh, there you go again with your sulky looks. It was a joke.’

The lady in the nightdress sniffed.

‘And pay no attention to her, neither,’ added Jack in a hushed voice. ‘I’ll bet her chap’s better off with the sister than with that moaning old trout.’

Ebook available for kindle US,

Old School Wednesdays: The Green Glass Sea & The Pearl of the Soul of the World