A few weeks ago I wrote my thoughts on three Middle Grade novels in one post (Ana’s Classic Middle Grade Horror Novel Marathon) and I thought the format worked really well. Since there are so many short MG books I really want to read, I thought I should make this into a regular Thing. (AND I would love recommendations please, on what to read next.) 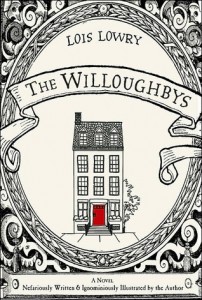 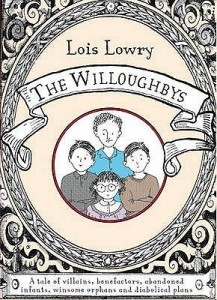 Abandoned by their ill-humored parents to the care of an odious nanny, Tim, the twins, Barnaby A and Barnaby B, and their sister, Jane, attempt to fulfill their roles as good old-fashioned children. Following the models set in lauded tales from A Christmas Carol to Mary Poppins, the four Willoughbys hope to attain their proscribed happy ending too, or at least a satisfyingly maudlin one. However, it is an unquestionably ruthless act that sets in motion the transformations that lead to their salvation and to happy endings for not only the four children, but their nanny, an abandoned baby, a candy magnate, and his long-lost son too. Replete with a tongue-in-cheek glossary and bibliography, this hilarious and decidedly old-fashioned parody pays playful homage to classic works of children’s literature.

I bought The Willoughbys by Lois Lowry (HMH/ Boxer Books; 2008) very recently when I saw its tagline (in the UK edition) “A tale of villains, benefactors, abandoned infants, winsome orphans and diabolical plans” because it sounded extremely promising. Unfortunately, it didn’t exactly live up to my expectations and I feel it missed the mark with what it tried to do as a parody of old-fashioned children’s stories.

It is a concoction of several tropes of children’s fiction: horrid families, orphans, left-at-the-door babies, over- the-top plot twists and a cosy happy ending. Those tropes are used and abused in an extremely self-aware story that knows it is parodying old-fashioned literature (the words “old-fashioned” appear every other page). My problem is with the way those elements were parodied here coming across to me through this overwhelming sense of mockery without recognising the richness and the heart of those stories. Granted, there are things about old-fashioned books that do deserve to be scrutinised for their shortcomings and Lois Lowry actually does this really well when examining the sexism present in the siblings’ dynamics (the older brother constantly tells the younger sister that as a girl she is not supposed to be doing anything useful). But beyond that one highlight, the rest of the story lacks any sense of internal logic, and its irreverence is extremely forced. I guess I could say that this had all of the cleverness, none of the heart? That said, parodies are very hard to get right and often work differently for different readers. 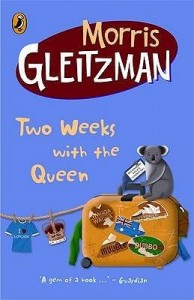 “Dear Your Majesty the Queen,

I need to speak to you urgently about my brother Luke. He’s got cancer and the doctors in Australia are being really slack. If I could borrow your top doctor for a few days I know he/she would fix things in no time. Of course Mum and Dad would pay his/her fares even if it meant selling the car or getting a loan. Please contact me at the above address urgently.

P.S.
This is not a hoax.
Ring the above number and Aunty Iris will tell you.
Hang up if a man answers.

Now, Two Weeks With the Queen by Morris Gleitzman (Puffin Books; first published in 1991) has ALL THE HEART (as well as all the cleverness). Things Mean a Lot’s Ana recommend it (and even gave me a copy of the book) which in other words means: I simply had to read it. And it is probably one of the most surprising Middle Grade books I’ve ever read, one that deals with Death, Grief, Cancer and LGBT issues with subtlety, depth, sense of humour and emotional resonance.

And it’s a beautiful story that hides behind the veneer of the main character’s – a young boy whose younger brother has being diagnosed with terminal cancer – almost outrageous optimism and child-logic as he tries to come up with a plan to contact the Queen of England in order to get the Best Cancer Doctor in the World to see his brother because of course The Queen’s doctor would be able to cure him. And while he is at it, he becomes friends with Ted, a young man whose boyfriend has Aids and is also dying of cancer. It is through this friendship – and by seeing what they are going through – that Colin comes to realise certain truths about compassion and companionship that also apply to his own situation. In the end I was a sobbing mess (MY EMOTIONS) and it was so worth it.

I seriously cannot praise this book enough. It is a cancer book without being a cancer book (if you know what I mean) and it reminded me both of John Green’s The Fault in our Stars and Patrick Ness’ A Monster Calls for the real, raw, honest way it deals with grief. Highly recommended. 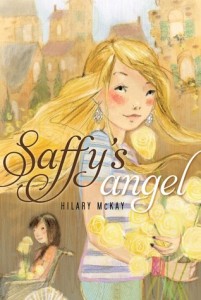 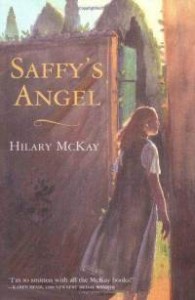 The four Casson children, whose mother, Eve, is a fine-arts painter, have all been given the names of paint colors. Cadmium (Caddy), is the eldest; then Saffron (Saffy); Indigo, the only boy; and Rose, the youngest. When Saffy discovers quite by accident that she has been adopted, she is deeply upset, though the others assure her that it makes no difference at all. Saffy is the daughter of Eve’s twin sister, who lived in Siena, Italy, and died in a car crash. Grandad brought Saffy, as a very small child, back from Siena. At Grandad’s death he leaves something to each of the children. To Saffy, it is “her angel,” although no one knows its identity. How Saffy discovers what her angel is, with the help of an energetic new friend, lies at the heart of this enchanting story. Unforgettable characters come alive in often deeply humorous and always absorbing events to be treasured for a long, long time.

The last of today’s round-up is another winner (also recommended by Ana, by the way) and a new addition to my keeper shelf: Saffy’s Angel by Hilary Mckay (Margaret K. McElderry Books /Hodder; 2001), the first in the Casson Family series. Out-loud funny, engaging, featuring an extremely charming family, Saffy’s Angel also – successfully – attempts to address serious issues in a low-key and yet extremely smart way. Although this first book in particular focus on Saffy’s journey to learn her place in the family (after she finds out she is adopted), the highlight often shifts toward the other members of the family as well. In the end, the reader comes to know each member of the family as well as their shortcomings and their strengths really, really well. The siblings’ interactions are awesome. And I swear that this one scene when they are driving together to Wales is one of the funniest scenes I have read in a long, long time:

“I can only drive slowly.”
“That’s all right.”
“And I can only do left turns.”
Rose ran downstairs, grabbed a road atlas, and ran triumphantly back up again. “Wales is left! Look! It’s left all the way!”

As much as I love the siblings though, I was fascinated by the parents’ fraught relationship and the way that the narrative observed their interaction in a critical way. Their father Bill would be a benign – if- absent parental unit if it weren’t for the ways that his outlook – the way he sees his wife’s work in relation to his own, for example –corrupts the life of his family. We are definitely not supposed to love Bill the way we are supposed to fall for this family and the narrative never lets us forget that:

“He had a charm about him sometimes, a warmth that was irresistible, like sunshine. He planted Saffy triumphantly on the pavement, opened the taxi door, slung in his bag, gave a huge film-star wave, called, “All right, Peter? Good weekend?” to the taxi driver, who knew him well and considered him a lovely man, and was free.

“Back to the hard life,” he said to Peter, and stretched out his legs.

Back to the real life, he meant. The real world where there were no children lurking under tables, no wives wiping their noses on the ironing, no guinea pigs on the lawn, nor hamsters in the bedrooms, and no paper bags full of leaking tomato sandwiches.”

Saffy’s Angel actually made me think of the way that literature can engage meaningfully with issues like this one little book tackles: gender roles, ableism, unhealthy expectations, difficulty in learning (and taking exams) in ingenious ways. I also realised how I have been finding comfort when reading Middle Grade books because they have been fulfilling my need for thoughtful-as-well-as-fun literature more than any other category of books at the moment.

Two Weeks with the Queen