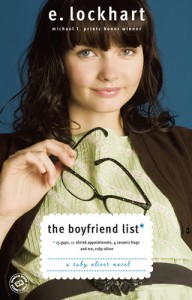 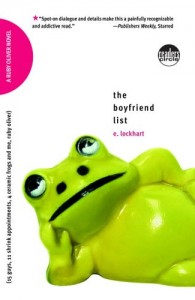 lost all her other friends (Nora, Cricket),

did something suspicious with a boy (#10),

did something advanced with a boy (#15),

drank her first beer (someone handed it to her),

had a panic attack (scary),

failed a math test (she’ll make it up),

hurt Meghan’s feelings (even though they aren’t really friends),

became a social outcast (no one to sit with at lunch)

and had graffiti written about her in the girls’ bathroom (who knows what was in the boys’!?!).

But don’t worry—Ruby lives to tell the tale. And make more lists.

Why did I read this book: I have become a big fan of E. Lockhart ever since I read The Disreputable History of Frankie Landau-Banks last year, and have been slowly catching up with her back list.

I was going through another one of those Dreaded Reader’s Block (I tried to read and couldn’t finish no less than 6 books in 5 days) when I decided to give The Boyfriend List a go. There are few certainties in my life right now but one of them does seem to be the fact that I can completely rely on Contemporary YA to save me from the DRB.

In the past 10 days 15-year- old Ruby Oliver has become a social outcast at Tape prep, lost all of her friends and her boyfriend Jackson broke up with her (and started dating her former best friend). It is no surprise that Ruby has a few panic attacks and then prompted by her mother, starts seeing a shrink, Doctor Z. As a starting point, the doctor suggests a Boyfriend List – a list of boys that Ruby has dated or wanted to date, present and past, going all the way back to preschool.

The list is what frames their sessions and the narrative, each chapter supposedly relating to a boy in the list: supposedly because of course, the subject of this book is Ruby Oliver and her relationships with her family, her friends and yes, with the boys in her life. The Boyfriend List is Ruby’s journey of self-discovery whilst attending high school – a journey that only but starts with this book (as it should be, she is only 15 after all). It includes funny and heartbreaking moments – also embarrassing and stupid ones. And I loved the cool psychologist and her sessions with Ruby. These were portrayed in a very positive way and I truly appreciated that.

Ruby Oliver behaves like a teen, thinks like a teen and I am probably not going to be the first one to note how events and behaviours in the novel reminded me a lot of my own teenage years. One of the things I absolutely adore about E. Lockhart’s books is how she just gets teenage angst and confusion right. More than that though, she writes those in a way that is infused with feminist lessons without making it even remotely preachy or heavy-handed.

And this, THIS is how you write feminist YA:

1) Ruby Oliver is a cool character, because she has an amazing voice and is written extremely well. But she is not an excepto-girl, she is no more special than any other girl out there – her experiences are relatable because most of us and most of her own friends are going through them. This is not to say that she doesn’t have unique traits and personality.

2) One of the things that Ruby comes to realise is that lust and desire exist outside the boundaries of love and it is possible to feel one without the other, it is possible to feel desire for people you don’t even like all that much or even when you like someone else. And how that is perfectly fine and natural and healthy. The real question is how do you deal with those feelings and that is something to each individual.

3) Of course, not everybody will think so and there is a lot of slut shaming in this book, even Ruby at one point wonders if she is a slut or not. There is a great moment in which the kids learn how charged this word is and its social context. This scene was probably too close to being didactic but since it was within the confines of a lesson, it was less jarring that it could have been. The point is how it was addressed by Ruby later on.

4) One of the things that Ruby observes throughout this novel is how much of her behaviour stems from repetition of commonly accepted gender roles. She does a lot of passive waiting for the boys she likes to make a move or behave in certain ways – because that is supposed to be norm. But Ruby discovers she has a voice and doesn’t necessarily need to wait for things to happen to her.

I appreciate that my list is perhaps a bit too clinical and doesn’t really convey how naturally these things appear in the text, how well the story develops and how funny the book truly is. That is part of my evil plan to make you all read it and discover for yourself, just like I did.

Plus, the ending was pitch perfect – with just enough growing up done but without tidying things up too perfectly – which just made me want to pick up the next book ASAP. Which I did.

Below, a list of present-giving misdemeanors, perpetrated by Jackson Clarke upon the unsuspecting and inexperienced Ruby Oliver.

ONE. In first month of going out, put a tiny ceramic frog in my mail cubby every Monday morning. There were four. I still have them on my desk. Each one is in a different position and has a different expression on its face. Okay, that’s not a misdemeanor. It’s very nice. But then –

TWO. Stopped with the frogs. No explanation. That fifth Monday, I looked in my mail cubby first thing, all frog-ready, and it was empty.

I looked again after my first class, and it was still empty.

It was empty all day.

I felt stupid bringing it up because it was just a tiny ceramic frog and not a big deal or anything, but I wondered all day why he hadn’t given me a frog. Then I thought, maybe he forgot to bring it to school with him and he’ll bring it on Tuesday.

But on Tuesday, no frog, again! A frog-less day.

At the end of Tuesday, Jackson asked me if anything was wrong. I tried to make a joke of it, felt so dumb even bringing it up, but it was so bothering me, like we had this special thing that we did and now he’d canceled it. “Ruby!” he laughed. “There were only four frogs, that’s why! They had four different expressions at the store, and I bought them all. I ran out. It doesn’t mean anything.”

I said Okay, and I was sorry to be so silly. But if I had been him — that is, if I had been the one giving the frogs, I would have found a frog-substitute for the Monday after the frogs ran out. I would have found a gummy frog, or a plastic frog-bath toy, or written a note with a frog on it. At the very least, I would have warned him that the fourth frog was, in fact, the final frog. Something. He wouldn’t have gone wondering and feeling disappointed for two days.

THREE. Christmas. A reasonable time to give a present to your girlfriend, no?

Reading next: Okay For Now by Gary D Schmidt